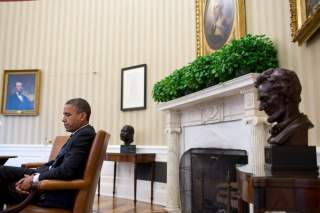 In a recent Washington Post column, Eliot A. Cohen, U.S. State Department counselor from 2007 to 2009, compared President Obama’s response to the Gaza war to Abraham Lincoln’s handling of the U.S. Civil War. Cohen argues that, while both presidents hated war, Lincoln “accepted war for what it is”: a brutal contest between two nations or two societies that only ends when one side breaks the will of the other. Lincoln may have struggled with the decision to fight the South relentlessly, but he was resolute, and he demanded the same commitment from his generals. Obama, Cohen maintains, cannot conceive of himself as a war president and is unwilling to rally his opponents in Congress, the American public, and U.S. allies to challenge foreign enemies and fight decisively. For Cohen, this explains why Obama has not called for U.S. military support of Israel in its battle against Hamas. Instead of aiding America’s “tough little ally,” the Obama administration is obstructing Israel’s efforts to defeat a dangerous enemy.

Cohen speaks for the Obama critics who believe the president’s foreign-policy vision is muddled at best and nonexistent at worst. These are understandable criticisms, for it is unclear what Obama has hoped to accomplish in terms of international relations. He has sought to end the wars in Iraq and Afghanistan, but democracy has not taken root in either nation. He authorized the use of drones in Pakistan. The Guantanamo Bay prison remains open. The so-called pivot to the Asia-Pacific region has not happened, stymied, perhaps, by violence in Ukraine and the Middle East. Some critics call the president indecisive; the harshest ones call him weak. As Cohen wrote, in the case of the Gaza war, a “more sensible” administration would have stood up for Israel.

There are several weaknesses in Cohen’s argument. First, the Lincoln-Obama analogy does not hold up. The Gaza war is not a U.S. civil war, nor has it involved an assault on American soil. Lincoln, as president of a nation that was attacked, had an obligation to fight, but Obama has no similar obligation in a war that is between Israel and Hamas. Second, Cohen stops short of suggesting how the president should involve the United States in the conflict. Boots on the ground? More weapons to Israel? Drone strikes? Cohen writes that drone strikes in Pakistan and the assassination of Osama bin Laden were supposed to have defeated Al Qaeda, but instead led to the flourishing of radical Islam through other organizations. By that reasoning, we can speculate that if the United States helped Israel obliterate Hamas, another group, angrier and more radicalized, might take its place. This is not to mention the additional killing of civilians that undoubtedly would occur if another military were added to the explosive mix in Gaza. Third, Cohen misses a central fact of the history of U.S. military engagements since 1945: there have been no decisive victories. The wars in Korea, Vietnam, Iraq and Afghanistan all ended in stalemate, defeat or uncertainty. One can try to make the case that the first Persian Gulf War was a “win,” but U.S. troops returned to Iraq a bit more than a decade after it ended. If Cohen believes Obama should authorize a U.S. military intervention in Gaza, he must explain how this conflict is different.

On the broader issue of understanding and accepting war for what it is, Cohen assumes that accepting war in all its brutality means choosing it. Perhaps what President Obama knows is that accepting war for what it is sometimes means understanding its futility. U.S. military involvement in Gaza will bring no long-term solution if Israel and Hamas cannot come together, agree to end the violence, and make some compromises that will ensure a lasting peace. The United States should not turn its back on the Israel-Gaza conflict. From the slaughter of women and children in Gaza to the frightening rise in anti-Semitism in Europe, which observers link to the current war, these things make the world a more dangerous, less secure place. The United States should assist in the mediation process, provide humanitarian aid, and demand that allied governments crack down harshly on anti-Semitism. Advocating a U.S. Civil War-era Lincolnesque military response to a complicated twenty-first century conflict in the Middle East suggests an unwillingness to accept the limitations of war and forgets more recent and relevant history.

Heather Marie Stur, Ph.D., is an associate professor of history at the University of Southern Mississippi and a fellow in the Dale Center for the Study of War and Society. She is the author of Beyond Combat: Women and Gender in the Vietnam War Era (Cambridge 2011). During the 2013-14 academic year, Stur was a Fulbright scholar in Vietnam.