Don't Give up on Moldova 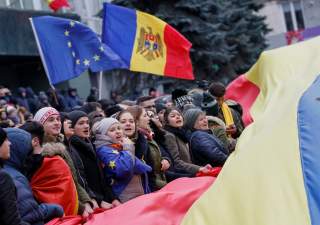 Moldova—Europe’s poorest country—has struggled with the challenges of post-Soviet transition. This transition has become vastly more difficult as a result of the breakdown of Europe’s post-Cold War security order in 2014. It is now caught up in a geopolitical tug-of-war between Russia and the West, and is at risk of becoming Europe’s next security crisis, with potential consequences far beyond its borders.

Since gaining independence in 1991, power in Moldova has alternated between the Communist Party, which has traditionally sought stronger ties with Russia, and self-declared pro-European parties, which have advocated membership in the European Union (EU). Since 2009, a series of such parties have held power, each of which has made European integration its goal. Although Moldova has made some progress over the past eight years—including signing an Association Agreement with the EU in 2014—multiple challenges remain.

The most serious of these is corruption. In 2014, the Organized Crime and Corruption Reporting Project (OCCRP) revealed that Moldova’s banks and judiciary had played a key role in a vast money-laundering scheme called the “Russian Laundromat,” in which Russian criminals and politicians moved as much as $20 billion (and possibly more) into Europe, the United States and elsewhere. The same year, an estimated $1 billion—roughly equal to twelve percent of Moldova’s total Gross Domestic Product— disappeared from three of the country’s banks.

At the turn of the millennium, the World Bank described Moldova as a “captured state,” in which the democratic transition process was vulnerable to both domestic and foreign vested interests. This remains true today. Moldova is characterised by an oligarchic power system in which state institutions have been subdued, independent decisionmaking has been paralysed and civil society is weak. Russia’s actions are a part of the reason for this, but not all of it. Although Vladimir Putin has sought to obstruct Moldova’s integration into the Western orbit, Moldova’s elite have done the most to stall their country’s transition.

The regional picture is also bleak. Unlike other post-Soviet “frozen conflicts,” the effects of Transnistria—the breakaway, Russian-speaking province along Moldova’s eastern side—on Moldova’s development has been, in relative terms, marginal. Yet the crisis in Ukraine, beginning in 2014, has sparked fears that the conflict might thaw.

Days after the annexation of Crimea, Transnistria’s leaders appealed to Moscow to join the Russian Federation, but nothing came of it. In the summer of 2015, as tensions between Ukraine and Russia increased, a number of civic groups in the province—where about one-third of the estimated five hundred thousand population are Russian—called on the Kremlin to protect them “in case of emergency.” Shortly afterwards, Transnistria’s leaders mobilised its army reservists. That particular flashpoint passed peacefully, but any number of issues have the potential to spiral out of control.

One such issue is energy supply. Transnistria is dependent on Russia for its supply of gas and has built up debts of around $6 billion to the Russian energy giant Gazprom. Earlier this year, Gazprom took Moldova’s state gas company MoldovaGaz to the Moscow-based International Commercial Arbitration Court for debt repayment. The case is still ongoing, but were Moldova to refuse to pay Transnistria’s debts and were the flow of gas to be halted, then Transnistria’s leaders—who complain that Moldova, together with Ukraine, is conspiring to place the region under an economic blockade—might be tempted to escalate the situation.

The lesson from Ukraine is that, in today’s Europe, a state’s stability and strength depends on its commitment to democracy and the rule of law. Yet Moldova’s politicians have, since the collapse of the government in 2015, been distracted with staying in power. With parliamentary elections scheduled for next autumn, the ruling Democratic Party—which is led by Vladimir Plahotniuc, Moldova’s richest man—recently oversaw a change to the country’s electoral system which—according to the Venice Commission, the Council of Europe’s constitutional law experts—could lead to “undue influence” by political or business interests.

It is, of course, in Moldova’s interests to overcome its stalled transition. But in the absence of domestic initiatives aimed at good governance and reform, there are a number of things the West can do. First and foremost, it should be prepared to suspend financial assistance to Moldova if reforms are not forthcoming. Moldova is dependent on Western finance—the EU has provided more than €1 billion ($1.4 billion) over the past decade alone—and cutting this would force Moldova’s leaders to consider the basic tenets of their country’s statehood.

Alongside this, Western countries should use bilateral and multilateral forums to press Moldova to implement reforms that ensure the independence of the country’s law enforcement and judicial systems, weaken the grip of oligarchic money on politics and provide civil society with better protections. Western countries should also work harder to prevent the flow of criminal money from Moldova into Western banks, and prosecute those who have facilitated it. The Organization for Security and Cooperation in Europe should continue to help manage the relationship between Chisinau and Transnistria.

The West cannot afford to overlook the situation in Moldova. Were the country’s foreign policy orientation to change, a significant strategic prize would drop into Putin’s lap. And this could undermine the fragile stability in eastern Europe.

Dr. Andrew Foxall is Director of the Russia and Eurasia Centre Studies at The Henry Jackson Society. Follow him on Twitter: @drewfoxall