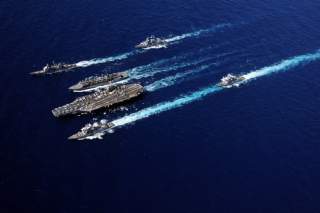 The Pentagon amended its “mental map” of the world last week at Pearl Harbor, when Adm. Harry Harris handed over the keys to the U.S. Pacific Command to Adm. Phil Davidson. Admiral Harris relinquished the Pacific Command; Admiral Davidson took charge of the Indo-Pacific Command. What’s in a name? For one thing, this was more than mere bureaucratic tinkering. Human beings reason from assumptions. Geopolitics is power politics that unfolds amid distinct geographic features. Assumptions about geography shape how we interpret the setting and our place in it. Changing the name of a geographically-oriented institution, like a regional combatant command, can modify assumptions about that institution, and shape expectations about its future behavior for strategic and political gain. Foes can be cowed, allies and friends comforted, U.S. armed services and nonmilitary agencies rallied behind common endeavors.

So names do matter. Rebranding the Pacific Command represents an effort to recast how military folk assigned to the command regard their theater and how to manage it. It will widen their view to encompass South as well as East Asia. Changing the name can also help Washington reshape assumptions among officialdom, and even among ordinary Americans. And if Pentagon messaging resonates, it will revise the worldviews of prospective foes like China—as well as allies, friends and bystanders—to the strategic competition now roiling the Western Pacific. Allies throughout the Indo-Pacific theater will know that America will be there when the chips are down. China will know that as well, and may refrain from challenging the allies.

Mental maps are malleable, subject to distortion, and hierarchical. Emeritus professor Alan Henrikson of the Fletcher School of Law and Diplomacy defines a mental map as “an ordered but continually adapting structure of the mind—alternatively conceivable as a process—by reference to which a person acquires, codes, stores, recalls, reorganizes, and applies, in thought or action, information about his or her large-scale geographical environment, in part or in its entirety.” Mental maps, he says, are “triggered” when “a person makes a spatial decision, that is, when the individual confronts a problem that obliges him or her to choose among alternative movements in space.”

Henrikson furnishes an everyday example to illustrate: “a mental map is activated when a person thinks about which is the shortest, cheapest, and quickest commuting route to work.” Geospatial relationships are not everything, it seems. Commuters may find themselves comparing routes. After all, the shortest route may not be the quickest, and neither one may be the cheapest. Human judgment—not just distances, altitude, or angles—determines the layout of a mental map.

Mental images are likewise triggered when pondering weightier matters such as “the security of oil-shipment routes to the United States” or the future of nuclear arms control. Persian Gulf oil must traverse distended sea routes, some infested by piracy, to reach American seaports. By contrast, Brazilian oil exports travel by direct sea lanes through waters dominated by the U.S. Navy and Coast Guard and their regional partners. One mental map is oriented more or less horizontally and bears the warning Here Be Dragons in places—notably the Gulf of Aden, where piracy remains a menace. The other is vertical in orientation and involves relatively short, safe voyages.

Because mental maps are plastic, deliberate efforts to mold geographic consciousness, they are nothing new for statesmen and commanders. Such efforts help them, say, rally popular backing for their policies. “Look at your map,” President Franklin Roosevelt entreated the American people during his Washington’s Birthday fireside chat in February 1942. FDR demanded that listeners pull out their atlases, take a gander at China, Russia, the British Empire, and the Americas, and imagine the repercussions should these “great reservoirs of power” be “cut off from each other either by enemy action or by self-imposed isolation.”

If fragmented from mutual support, centers of economic and military might would fall to Axis conquest one by one. America must not let that happen. It must imitate the eagle, “flying high and striking hard” to defeat the mutual foe. In other words, preserving connectivity with allies and friends represented a cause worth shedding blood for. By appointing himself the nation’s geography teacher, President Roosevelt sought to direct and build public support for the war effort the Imperial Japanese Navy thrust upon America at Pearl Harbor. Schooling Americans in strategic geography alerted the citizenry not just to basic geographic facts but to the dangers of a world on fire.

In the case of the Indo-Pacific Command, the Pentagon is stating that it considers the Pacific and Indian oceans a single, indivisible expanse. Maritime connectivity remains as crucial as it was during the age of FDR. This is a Mahanian point. Alfred Thayer Mahan portrayed the world’s oceans and seas as a single, interconnected body of water (leaving aside such obvious exceptions as the landlocked Caspian Sea). That world ocean reaches deep into continental interiors in many places, via navigable waterways such as the Mississippi, Rhine, or Yangtze rivers. St. Louis and Minneapolis are seaports as surely as New Orleans.

But the name game is about more than acknowledging basic facts about the sea. It’s about strategy. U.S. maritime strategy long relegated the Indian Ocean to afterthought status. Not that many years ago a senior diplomat visiting the Naval War College described American strategy as an “I-95 strategy.” How’s that for mental imagery? It indicates that U.S. forces hurtle through regional waters bound from Atlantic or Pacific harbors to destinations such as the Persian Gulf. Mariners pay the surroundings little heed—much as motorists disregard the roadside scenery until they reach their exits.

No more. The Defense Department is announcing that it sees U.S. interests at stake throughout the combined Pacific and Indian theater. No longer is the Indian Ocean a backwater or a mere roadway for military movement. It’s a region populated or bordered by important allies and friends, notably Australia to the southeast and India to the north, and it’s where a prospective foe is amassing sea power in the form of port development, economic aid and investment, and, increasingly, military infrastructure. South and East Asia thus comprise coequal halves of the Indo-Pacific Command area of responsibility. The Indian Ocean is no longer a secondary theater where U.S. forces operate on a not-to-interfere basis with endeavors in the Pacific.

Human perceptions may not make for accurate cartography. If mental maps stem from perceptions of geography, misperceptions are also possible. Heck, they’re commonplace. My mental map of New England is distorted. I live in greater Providence, Rhode Island, about two-three miles from Newport, home of the Naval War College. The seaport at Mystic, Connecticut, lies fifty-eight miles away. But on my mental map Providence is equidistant between the two towns. That’s absurd—except it takes the same amount of time to drive to the one destination as the other because one small town after another lies between here and Newport while you can zip down the interstate to Mystic at top speed. Time misshapes perceptions of distance. Short but slow, or long but fast?

Not just the physical surroundings and the velocity at which we cover ground shape mental maps. Politics and culture also influence—and often distort—perceptual cartography. Take Saul Steinberg’s New Yorker cover from the mid-1970s depicting “The View from Ninth Avenue.” Steinberg portrays everything in Manhattan as gigantic and detailed, while only barren wasteland with a few scattered features stretches westward from New York to the Pacific Ocean. China, Japan and Russia are featureless landmasses that barely peek over the horizon. Hence New Yorkers’ derisive phrase “flyover country” to describe the American heartland. (On the other hand, New York is “drive-through country” for us Southern expats barreling southward to visit family. Fair’s fair.)

Furthermore, mental maps—or is it mental nautical charts in the saltwater realm?—can inflate the value a coastal society affixes to offshore waters. Ask an Iranian about the name of the Persian Gulf. Iranians get exercised when outsiders refer to the Persian Gulf as the Arabian Gulf, as the U.S. government makes a point of doing, or otherwise denigrate the importance of that body of water. I once served on a panel at Annapolis with an Iranian scholar who got incensed when I quoted the Indian geopolitics master K. M. Panikkar’s description of the Gulf as a bay or inlet in the Indian Ocean. This, my fellow panelist insisted, demoted the Gulf to secondary status and thus, apparently, impugned Iranian dignity. (I made my escape by noting that I managed to grow up beside the Gulf of Mexico without feeling offended by this manifestation of Mexican imperialism.)

But proprietary feelings toward the sea are more than just an Iranian thing. Indians take pleasure in having an entire ocean named after their civilization-state. The Philippine government now styles the waters to the archipelago’s west the West Philippine Sea, while Indonesian officials dub the waters to their north the North Natuna Sea. Both Manila and Jakarta are replying to China’s sense of ownership of the South China Sea. Koreans, and Korean-Americans, take umbrage when outsiders refer to the Sea of Japan as the Sea of Japan, its official name, instead of the East Sea, the Korea-centric name for that expanse. Japan demurs.