Don't Let the Headlines Scare You: The Trade Deficit Isn't That Bad 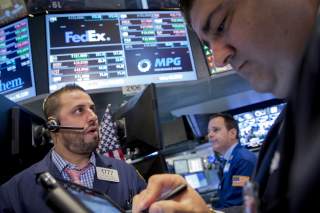 It is possible to be technically correct and still mislead, either inadvertently or intentionally. That surely has happened with recent reports on the U.S. trade deficit. These counted imports of goods and services some $59.8 billion in excess of exports in December, making the trade deficit for all 2018 some $621 billion, 12.4 percent deeper than 2017 and the reddest ink ever recorded for a year (though lower than a few months in 2007). Still, for all the superlatives invited by this report, a little perspective shows that this deficit is less imposing than it seems and fundamentally much less severe than at times in the past.

The first point of perspective emerges in the reasons why the trade deficit has widened. The U.S. economy has accelerated. Overall real economic growth last year amounted to just about 3 percent, far faster than the 2 percent a year average during most of the time since the 2009 end of the great recession. Every major economic sector joined this recent acceleration, most notably capital spending by business, which grew in real terms 6.7 percent a year in 2017 and 2018, a huge change from the near-zero growth average in the two prior years. As this faster rate of expansion stepped up demands for both domestic and foreign products, imports naturally rose.

Exports might have risen as fast, had the economies of America’s trading partners also accelerated. But as it was, these economies slowed. The European Union (EU) grew at barely 2.0 percent in 2018, slower than in earlier years. China, growing at some 6 percent, outpaced the United States but still grew slower than in the past. Canada grew barely 1.5 percent in 2018, Japan at about 1.2 percent, and Mexico at just about 2.0 percent. Demands for goods and services in these economies, whether from domestic sources or American producers, simply did not keep up with U.S. demands.

Alone, these different growth rates would have widened the U.S. trade imbalance, but there was more to it. Improving American economic prospects drew investment monies into the country from abroad, flows that raised the foreign exchange value of the dollar. Over the course of 2017 and 2018, the dollar rose by between 1.5 and 2.5 percent against the euro, the Canadian dollar, the Japanese yen, the Chinese yuan and Mexico’s peso. By making U.S. products slightly more expensive on global markets and foreign products slightly cheaper, this increase in the value of the dollar—though modest by currency standards—gave foreign products a pricing edge over U.S. products that attracted American buyers even as it limited foreign appetites for American goods and services. The currency moves were not enough to offset the tariffs variously imposed by the White House, but they were enough to exaggerate the impact of differential growth rates.

Moreover, recent history makes these effects clear. When in the 1990s, the technology boom among other things propelled the U.S. economy much faster than others, the U.S. trade deficit widened. The excess of imports over exports rose from some $108 billion in 1990 to $420 billion in the opening year of this century. A mild recession in 2001-02, briefly staunched American demands for imports, allowing a modest improvement in the trade balance, but then economic recovery renewed the earlier widening trend. By early 2007, just before the financial crisis, the gap reached levels not much different from those recorded last year. The great recession of 2008-09 cut off demands for imports. The trade deficit narrowed by half to $275 billion in 2010. In the recovery over the next six years, it began to widen again but only slowly. The disappointingly slow pace of America’s economic expansion only exceeded foreign growth by a small margin. Then, with the 2017-2018 American economic acceleration, the deficit widened more dramatically as described.

This history also makes clear that today’s trade imbalance, though greater in dollars than ever before, threatens the economy a lot less than lower dollar figures did in the past. The Commerce Department reports that 2018’s red ink amounted to some 3.1 percent of the country’s gross domestic product (GDP). That is well below all but a few years during the last two decades when the trade deficit averaged about 4 percent of GDP. It is dramatically better than the 5.6 percent of GDP the trade deficit measured in 2007. True, that year’s deficit was slightly less in dollar terms than 2018’s, but it fell on a smaller economy. Though the red ink of 2018 is not insignificant, it nonetheless clearly threatens the economy and American jobs a lot less than such deficits did in the not too distant past.

If economic growth in the rest of the world were to accelerate to the pace of the United States, the trade deficit would almost certainly narrow. The history reviewed here makes that clear. Alternatively, the deficit could narrow if this country’s economy were to slow to the paltry rates of expansion exhibited in the rest of the world. That might provide bragging rights in the media, but it would be a high price to pay for them.