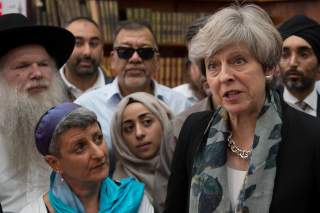 All terrorist threats must be dealt with, but should they all be dealt with in the same way? This dilemma gets to the heart of creating an effective Countering Violent Extremism (CVE) policy.

The Department of Homeland Security defines CVE as the “proactive actions to counter efforts by extremists to recruit, radicalize, and mobilize followers to violence.” Yet there was never complete clarity over its purpose.

Was CVE intended primarily as a soft-power complement to law enforcement, military and intelligence-gathering operations against violent Islamist groups such as ISIS and Al Qaeda? Or is CVE’s main focus on challenging all forms of radical ideologies—from Islamists to black separatists, eco-terrorists, white supremacists and the Far Right?

Many of America’s allies across Europe take a more inclusive approach. There is a logic to this—you don’t have to look hard to see there is a problem beyond ISIS-inspired terrorism. In the UK, for example, a far-right terrorist murdered the Labour MP, Jo Cox, last year, and Muslims were targeted in the attack near Finsbury Park Mosque this June. In 2011, mass murderer Anders Breivik struck in Norway, and five years later, Germany saw Ali David Sonboly, seemingly inspired by Breivik, carry out a mass shooting of his own.

In the wake of these kinds of attacks, there is an obvious compulsion to treat the threat from the Far Right as analogous to that of Islamist terrorism. Indeed, the pressure Prime Minister Theresa May and the police were under on this front after the Finsbury Park Mosque attack was palpable. To not do so, the argument goes, is essentially to ignore certain forms of hatred and validate the views of those who regard programs such as CVE as Islamophobic witch hunts.

There is no doubt that law-enforcement officials regularly have to deal with the threat posed by white supremacists. Unlike Islamists, however, such actors are not part of a global movement with a coherent aim and end goal in mind. White supremacism is, by and large, a bankrupt, unpopular and discredited ideology in a way that Islamism, unfortunately, is not. Just look at the support that still exists for the Muslim Brotherhood in the Middle East; while even the British Foreign & Commonwealth Office contends that certain brands of Islamism subscribe to “democratic principles and liberal values.” You could not imagine it saying anything similar about any kind of white-supremacist movement.

Governments are currently so keen to make sure CVE is done in a manner as politically correct as possible they only seem to feel comfortable addressing a dangerous ideology that exists within ethnic-minority communities by also focusing on another that exists within the ethnic majority. That is hardly intellectually satisfactory, regardless of the politics around it.

Those interested in crafting effective CVE policy must also consider where the government’s role in such initiatives ends. Jamie Bartlett wrestles with these kinds of issues in his new book, Radicals Chasing Utopia.

Bartlett spent time among militant environmentalists, trans-humanists, psychedelic societies and anti-Islam groups. One chapter deals with Prevent (the UK’s equivalent to CVE). He argues that “radicalisation, in all sorts of unpredictable directions, is on the rise,” yet posits a scenario in which public servants are “told to watch out for the signs of psychedelic radicalisation” and in which children are “taught about the dangerous recruitment techniques of transhumanists.” Even if Bartlett’s scenario plays out, some will be relaxed with this. Others will believe that government will be going too far in attempting to control which ideas are and are not acceptable.

For those concerned about CVE overreach, thought needs to be given to crafting appropriate metrics in helping trying to assess what ideologies CVE should address. Furthermore, these programs should not all be part of generic, one-size-fits-all strategy. Wrapping up competing ideologies in one counter-radicalization strategy undermines their complexity and variety.

With the arrival of a new administration in the U.S. and a review underway of existing CVE policy, now is the time for the Trump administration to weigh such issues. The momentum seems to be behind government taking an even larger role. Yet it may be time to go back-to-basics and ask what the U.S. actually wishes to achieve from CVE—and what the most effective way of achieving it is.

Robin Simcox is the Margaret Thatcher Fellow in the Davis Institute for National Security and Foreign Policy at the Heritage Foundation.