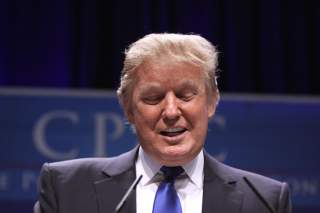 Donald Trump made many statements about foreign policy during his campaign, some dangerous, some promising. The latter, if he acts on them, could bring about the most profound change in American foreign policy since the end of the Cold War: a U.S. reluctance to use force to topple governments, influence the outcome of civil wars, and promote democracy and human rights. The appointments he makes, because they risk producing the same foreign-policy disasters previous presidents have experienced, could easily sidetrack these inclinations. The members of the foreign-policy establishment will be certain to try.

Nearly thirty years ago, in testimony before Congress, then secretary of state George Shultz offered a rare window into the inner workings of the Washington foreign-policy establishment. He told members of Congress, “Nothing ever gets settled in this town. It’s not like running a company or even a university. It’s a seething debating society in which the debate never stops, in which people never give up, including me, and that’s the atmosphere in which you administer.”

President Obama called the foreign-policy establishment “the Blob.” He was critical of the playbook it wanted to use, which invariably advocated the use of U.S. military force to effect regime change, interfere in other countries’ civil wars, and promote democracy and human rights, as well as a hyperactive and muscular approach to dealing with the world’s problems. Obama had a mixed record in taming the Blob; he succumbed to its preferences in Libya, but has kept it largely at bay in Syria. By the time of the election, many old hands in both the Democratic and Republican foreign-policy establishment were salivating over the prospect of Hillary Clinton, a charter member of that club, welcoming back the Blob’s members as mandarins of American foreign policy.

During the presidential campaign, Donald Trump challenged many of the cardinal tenets of the foreign-policy establishment’s view of America’s role and responsibilities in the world. The president-elect needs to beware the Blob. It is down but not out—and if vigilance is not maintained, it will infiltrate the national-security bureaucracy at senior levels and seek to staff lower-level positions with its loyal followers to counter his insurgency against the country’s foreign-policy elites. Trump’s challenge will be to maintain a focus on restraint in American engagement and uses of military power, while finding competent and experienced foreign-policy and national-security professionals who share his instincts. His White House staff will be critical to maintaining this focus.

Trump’s appeal was largely domestic, but rooted in part in a call to come home and focus on America’s problems. While foreign policy did not play a significant role in the campaign, he did give voice to a number of extremely dangerous ideas: shredding the nuclear agreement with Iran, building a wall on the U.S.-Mexican border, pulling out of NAFTA and killing the TPP, slapping stiff tariffs on China and Mexico, banning Muslim immigrants from entering America, deporting millions of undocumented Mexican immigrants, reinstituting torture and punishing the families of terrorist suspects, pulling out of the Paris agreement on climate change, accommodating Russian revanchism against Ukraine, withdrawing from NATO, forcing U.S. allies like Japan and Korea to pay more for their own defense or give up U.S. protection, and saying it might not be such a bad thing if both countries decided to acquire nuclear weapons to protect their security.

If Trump delivered on any of these proposals, the world would be a much wilder place; America would be far less secure and prosperous; and the global order and alliance relationships the United States has constructed and sustained since the end of World War II, which have helped to generate enormous global wealth and security while facilitating the projection of American influence, would crumble. None of these ideas would make America—already the most secure and prosperous nation on earth—great again.

And yet, Trump has touched on something that resonates with a large segment of the American public’s views on foreign policy. A Clinton presidency would likely have brought, in its wake, more interventionist efforts, more “global cop” responsibilities, more efforts to find American solutions to all the world’s problems and, conceivably, more disastrous outcomes for American security. The public does not want that. According to recent survey data, the majority of the American public want the United States to mind its own business and stop trying to be a global cop and solving all the world’s problems; in addition, they want our allies to do more, they are tired of war, and they are weary (and wary) of expanding foreign commitments and entanglements. They also believe that the activist promotion of democracy and human rights abroad should not be at the heart of U.S. foreign policy. These views fly in the face of the Blob’s preferences, as expressed to each other in a never-ending flow of reports and media appearances during the campaign.

Trump’s extreme rhetoric has obscured his noninterventionist instincts. There are limits to America’s power, especially as the global distribution of power has shifted globally since the end of the Cold War. The United States has dominant military capabilities and significant interests, but does not have the power to “shape” the rest of the globe or impose its views in every region. Moreover, it does not have the need to do so; not every clash, conflict, civil war, or terrorist group is a challenge to the United States or a threat to its security. If Trump’s proclivities for restraint prevail over his combative instincts, it could bring a sea change to the way the United States deals with its global role, relations with other nations and, above all, the use of military force.

The axiomatic assumptions of the national-security blob, from liberal interventionist to neoconservative, are that the United States is and should be the global leader, and that other countries not only welcome this leadership but urgently demand the projection of American power to promote a “made-in-Washington” vision of what the rest of the world should look like and how it should behave. The essence of this faith is that the United States is the “indispensable” nation, destined to lead, to shape regional and global security, to maintain its domination of other regions, and to secure the safety and well-being of the globe.

Trump’s apparent rejection of a U.S. nation-building mission and of using the military to overthrow regimes we don’t like, intervene in other nation’s civil wars, and impose democracy and human rights on other countries seems to repudiate what both neoconservatives and liberal interventionists would do: unceasing, expensive, dangerous and unnecessary efforts to maintain American primacy and impose “order” that have led to less security and greater danger for our country. Moreover, this renunciation of activist military intervention could help ease tensions with Russia and China, both of which see U.S. efforts to forcibly overthrow other governments as a potential threat to their security. A less interventionist stance could open the door to more regular high-level contacts and the tough negotiations the United States now needs to have with Moscow and Beijing to arrest its deteriorating relations with both major powers.

A noninterventionist policy would be a revolutionary change. America would not arrogate to itself responsibility for ensuring security in every corner of the globe at all times. It would accept the notion that the world has rebalanced and is now populated with regional powers that can and should take greater responsibility for security problems that do not directly affect the security of the United States.

It would deal with other nations and their leadership as they are, and not as we insist they should be. And it would accept that other countries have their own ways of choosing their own leaders, and that Washington needs to deal with these leaders even when we don’t like their policies, rather than seeking to throw them out. Were this to happen, it would be a refreshing and long-overdue break with a lengthy tradition in U.S. statecraft that has, for too long, conflated personal and moral judgment with a defense of American interests abroad.

Don’t hold your breath. It is hard to see Trump carrying out foreign policy with this kind of consistency. The bottom line is that the Blob is everywhere, waiting for a chance to “educate” Trump about how to deal with the world. He would need to be ready to push back, even more strongly than Obama did, and he may not have it in him. But if Trump does, he has the potential to make a large and positive difference in American foreign policy.

Gordon Adams is a distinguished fellow at the Stimson Center, professor emeritus at American University, and was senior White House budget official for national security in the Clinton administration. Richard Sokolsky is a senior associate at the Carnegie Endowment for International Peace and a former member of the secretary of state’s policy planning staff.