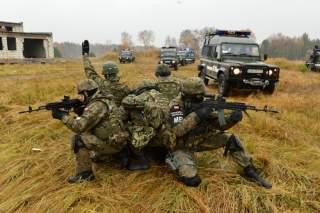 DOES THE United States benefit from having allies? In recent months, Donald Trump, the presumptive Republican presidential nominee, has voiced skepticism about the value of core American allies in Europe and East Asia. Trump argues that U.S. allies are free riding off the United States, and that their contributions to U.S. security are no longer sufficient to justify either the risks or the costs they impose on Americans. He is far from alone this election season. Surrogates for Bernie Sanders like Jeffrey Sachs have made similar arguments. Even President Obama himself expressed frustration about allies and partners that do not pull their weight in his recent Atlantic interview, as did former secretary of defense Robert Gates in his second memoir. In earlier years, politicians as diverse as President Dwight Eisenhower and the Democratic Senate majority leader Mike Mansfield issued similar complaints.

There is something to all this. U.S. alliances should exist not primarily as expressions of national altruism and largesse, but as ways of advancing America’s own interests. And alliances can indeed cease to make sense. Cold War alliances that did not have legs, like NATO’s stillborn cousins CENTO in the Middle East and SEATO in Southeast Asia, attest to this reality.

But the truth is that sustaining alliances in North America, Europe and maritime Asia does advance U.S. interests—even when looked at from a hard-nosed businessman’s point of view. The reality is that U.S. alliances have served and continue to serve as an enduring source of strategic advantage and leverage—and ultimately, added security—for America. Indeed, Washington’s network of pacts is the envy of America’s rivals. Its main strategic competitors would trade places with us because they recognize and value what many alliance naysayers increasingly discount: America’s web of foreign security relationships is a source of power and influence in the world. And in particular, America’s rivals understand that U.S. alliances have foreclosed their expansion or reassertion of spheres of influence through the use of military force.

In the longer term, prudently managed alliances can lead to fewer American lives lost and less money spent. But while U.S. alliances are indeed valuable, the skepticism of Trump, Obama and others should be taken as an important reminder that alliances require continuing scrutiny, revision and accommodation to realize their value and to appropriately correlate risks and costs to benefits. The United States urgently needs to update its thinking about alliances for a new era.

IN ESSENCE, America benefits from alliances because the world is a competitive place. The United States is stronger, more able to shape global affairs in important ways and ultimately safer when allied with like-minded countries in key regions than without them. Put simply, it is generally better to have powerful partners than not. It is a commonplace that a person backed by a network of like-minded associates is a more formidable character than one on his own. And it is certainly better not to have those states aligned with one’s rivals. Alliances allow the United States to agglomerate the power and wealth of affinitive states (or at least those sharing similar fears) for common, broadly liberal purposes, while locking out rivals which could otherwise leverage that same power and wealth, probably for illiberal ends. The West prevailed in the Cold War in large part because of the coherence and strength of its alliance in the face of the Soviet Union. George Shultz, remarking upon the central factor behind the end of the Cold War, attributed it to the Soviet leadership’s realization not only that the United States was resolved to continue and intensify the Cold War competition, but that its major allies in Europe and Japan were as well and that the USSR simply could no longer hope to match such a grouping in a sustained geostrategic competition.

No other like-minded country is strong enough to perform the United States’ leadership role in this alliance network. The United States is the only nation with the power, global reach, financial depth and standing to cohere and maintain such a diverse grouping for broadly liberal ends. Collective action is always difficult, but it is particularly challenging when dealing with states, and most so in the realm of security and defense. Indeed, the United States is the only country that can overmatch regional hegemonic aspirants like China and Russia. Without America’s involvement, the calculations of states under the shadow of Chinese and Russian power would be considerably different. With the United States, balancing against major regional states is a rational strategy; without it, bandwagoning and accommodation become considerably more compelling.

This is well and good, some might retort, but these alliances are more trouble than they are worth. The scope of threats and enemies an alliance network has to deal with is wider than if the United States cut itself free of its allies. A nation that spreads its security commitments too freely risks entrapment in wars that do not serve its national interests and liabilities that undermine the credibility of its commitments elsewhere, just as a business that takes on too many disparate subsidiaries risks losing focus on its core competency and, ultimately, its profitability. Thus it is not clear that the United States is, on balance, more secure by being in such a network. To these critics, the case for alliances is circular, since the United States simply ends up defending capable but threatened or conniving states that might otherwise fend for themselves from rivals with whom the United States might otherwise have cordial relations. Accordingly, they contend, the United States can withdraw from its alliance commitments and the world situation will not deteriorate in a way that matters enough to justify U.S. intervention; states will step up to take care of their own security. Moreover, even if the situation does deteriorate, the United States can always reintervene to redress the situation.

There is some potency to variants of this argument, but it is ultimately unpersuasive. It relies on assumptions that the United States has learned the hard way are imprudent to count upon. First, the world situation can indeed deteriorate when the United States pulls back, and can do so precipitously and unpredictably. Americans have run this experiment before—after World War I, when the United States withdrew from European affairs. Before 1914, Great Britain had, in its period of preeminence, played the role of the promoter and guarantor of broadly liberal interests. But, after the winnowing of the Great War and absent the unique power of the United States, like-minded countries like Britain and France were unable to deter or halt the rapacity of states like Germany and the Soviet Union during the interwar period.

Nor does one need to see a Hitler or Stalin around every geopolitical corner to fear that such deterioration might well happen again. Today’s Russia is clearly interested in reestablishing its suzerainty over its historical sphere of influence, and China increasingly seems keen to attain dominance in East and maritime Asia. Without the clear commitment of the world’s most powerful state to balancing and blocking these aspirations, it is only prudent to reckon that these states’ ambitions and assertiveness would grow, and that others would join them. It is worth remembering, after all, that Berlin and Moscow were not the only revisionist actors in the interwar period—there were also Tokyo, Rome and Budapest, to name just a few. Ambition and interest are largely elastic functions springing from perceptions of feasibility and affordability in geopolitics as in personal life. Better to meet—and, best, deter—threats when they are aborning and still more subject to counteraction and contraction rather than when they have had the chance to grow and metastasize. The logic is to shape and deter threats so that intrepid and enterprising states see that restraint is a wiser course than aggression.

Stability in the international system is the exception rather than the norm, particularly favorable peaceful stability characterized by respect for a rules-based liberal order. Balances do not mechanically self-generate. Without the involvement of the United States, it is not at all clear that European countries would band together to block Russian aggressiveness, or even that they would, over time and in increasingly dire economic and societal straits, avoid deepening tensions among themselves. Likewise, in Asia, it is by no means clear that regional states, awed by a massive China, would cohere to balance rather than bandwagon with it. Or that revanchist or aggressive nationalist impulses on the part of many states would not come to overtake more constructive foreign policies that favor the maintenance of a stable and attractive international security and economic order.

If such a deterioration were to happen, moreover, it would almost certainly implicate the United States, given its far-reaching interests, and likely drag Washington militarily back into these regions yet again. This is what happened after World War I, and again after World War II. After both conflicts, the United States demobilized its fighting forces and expected to return again to something approximating its traditional insular position, yet both times was drawn back into European and Asian affairs. Similarly, in any plausible future environment, if Europe were threatening to descend into acrimony or fall under Russian hegemony, or if Asia were looking likely to come under Beijing’s dominance, the United States would almost certainly want to prevent such outcomes from occurring. Washington would know that a nation or collection of nations that could agglomerate the power of the world’s most productive regions would also be one that could begin setting the terms of international order, including with respect to trade, the so-called “global commons,” international laws and norms, and values, as well as begin to project influence, power and military might out of these regions and into the Western Hemisphere.