Don't Shrink Iraq to Save It 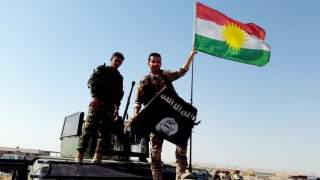 The Islamic State is likely to be forced out of Mosul and Raqqa. Yet many of the conditions that led to its emergence in the first place still remain. Military force is a necessary, but not sufficient, condition for defeating ISIS. However, the proposal that we partition Iraq along sectarian lines will not solve the problem. It is a dangerous idea that is brought up every time we face an ethnic civil war in the Middle East. Joe Biden endorsed it in 2006. If pursued, it will make Iraq’s problems worse, allow Iran’s influence to grow in Baghdad and exacerbate regional tensions. It is time that we discarded it once and for all.

Iraq is facing a situation somewhere between Yugoslavia and Somalia – a complete breakdown and fragmentation on the one hand where each region becomes fully independent, and a softer partition on the other where the federal government is weak and each province is responsible for itself. When watching news about the fight for Mosul, look carefully at your television and computer screens. You’ll notice that many of the fighters entering Mosul to take on ISIS are not carrying the flag of Iraq. Instead, many are carrying sectarian flags of the Shia Popular Mobilization Units or of the Kurdish Peshmerga.

Proponents of partitioning states embroiled in ethnic conflict have a simple argument for why partition is the best option for ending sectarian warfare. In an oft-cited article written in Survival in 1993, Barry Posen argued that ethnic conflicts break out in failed states where anarchy reigns. Like in the international system, ethnic groups face what is known as the security dilemma. They cannot easily distinguish friend from foe. In order for each group to enhance their own security, they make other groups less secure. (Alternatively, they can only make other groups feel more secure at the expense of their own security.) As a result, a spiral of conflict erupts. Building upon this logic, social scientists such as Chaim Kaufmann argued that partition and forced population transfers were the best available options for stopping the fighting. By separating the warring groups into separate states, they can defend themselves.

The logic sounds great. It’s the evidence that doesn’t add up. And that’s what makes it a problematic solution for Iraq.

First, there’s no guarantee that a host of new states built from the rump of Iraq won’t remain trapped in the security dilemma. Some newly independent states continue to nurse their ethnic grievances for domestic political reasons or to jockey for resource wealth. Pakistan and India fought three wars after partition in 1947. Ethiopia and Eritrea fought after they were partitioned, too. So did Serbia and Croatia, who fought a second time after they were partitioned in 1991. A study published in World Politics by University of Pennsylvania Professor of Political Science Nicholas Sambanis did not find any evidence that partition would reduce the likelihood of ethnic conflict. He also found that, “In most situations partition will have a negligible effect on residual violence.” There is no guarantee that the new states will necessarily be stable. Like South Sudan, oil and mineral-rich states may devolve into domestic competitions for resource wealth of their own.

Second, a partitioned Iraq will likely increase Iranian influence. Whether there is a “hard partition” (a la the former Yugoslavia) or a “soft partition” (a la present-day Somalia), as Iraq grows weaker, Iran grows stronger. This means the further marginalization and possible radicalization of the Sunnis in western Iraq. It would likely result in an increased competition for influence between Iran and Saudi Arabia for influence in the region.

In a panel at the Hudson Institute, the former Iraqi Ambassador to the United Nations Feisal Istrabadi drew a parallel between present-day Iraq and America under the Articles of Confederation. In both instances, weak central governments and poorly designed constitutions lead to national chaos. In the early days of the American republic, a political solution was forged that prevented the thirteen states from going their separate paths.

In Iraq, military force is a necessary ingredient for defeating ISIS and stabilizing the country, but it is insufficient. Partitioning Iraq into three or more separate states makes no more sense than allowing the American states to go their separate ways. Going forward, America’s commitment to Iraq should not be solely in terms of guns and bullets. It should be measured in terms of helping Iraq find a political solution that keeps the country united, free of foreign interference and provides for the peaceful resolution of sectarian disputes.

Dr. Albert Wolf is a Legislative Assistant for Foreign Affairs in the House of Representatives. The views expressed here are his alone.