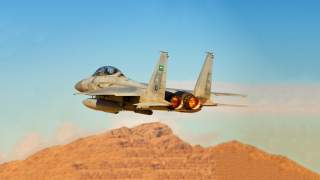 As the warring Yemeni parties gather for preliminary peace talks in Geneva, Saudi Arabia continues its unrelenting bombing campaign against the tribes of the Houthi movement. For two and a half months, the air forces of the Saudi coalition have targeted military sites, homes and businesses affiliated with the Houthi movement, as well as the palaces and residences of former Yemeni President Ali Abdullah Saleh and his political allies. Yet, as the Houthis sit down at the negotiating table this week, their domestic political and strategic position has not been greatly affected by this extensive bombing. Saudi Arabia’s futile air campaign is a further demonstration of the limits of airpower in general, and in South Arabia specifically.

Saudi Arabia did not pioneer the use of airpower to exercise regional power, which originated with the British imperial policy of “air control” in post-WWI Iraq. Winston Churchill, the postwar Secretary of War and Secretary of State for Air championed the use of air force to maintain British control over Iraq while expending the least amount of military force on the ground. Inaccurate intelligence, inadequate navigation equipment and pilot errors led many bombs astray, often hitting the wrong target and with little distinction between civilians and militants. Attacks and patrols by the British Royal Air Force were guided by sparse local intelligence networks and were intended more for the psychological impact of unfamiliar aerial bombardment rather than the ability to achieve a military objective.

This model of British imperial power and control was used in other colonial arenas, including South Yemen, then the British Aden Protectorate. A decade of British aerial patrols and attacks during the 1960s failed to stem the tide of a Yemeni nationalist movement that supplanted British colonial rule in South Yemen. The success of Britain’s air control in Arabia was limited by two main factors. The mountainous terrain of Yemen provided the guerilla opposition with an impervious natural cover from bombs within a cave system that pockmarks the landscape. International media was stacked against the remnants of the British Empire and bombs that found civilian targets were met with a great deal of negative press.

The British Royal Air Force was not the only imperial force in South Arabia trying to use its air force to dominate a tribal opposition. During the 1960s, Egypt transferred nearly a third of its air capabilities to North Yemen in support of the fledgling republic founded in 1962. The tactical success of the Egyptian aerial campaign was similarly hampered by Yemen’s terrain. Egyptian President Gamal Abdel Nasser even went as far as authorizing the use of poison gas against cave shelters, intending to flush the opposition out into the open before coming back around for a second round of high explosive incendiary bombs.

Air superiority was the linchpin of Egypt’s strategic model of maintaining a triangular defensive perimeter around North Yemen’s three main cities of Hodeidah, Sana’a, and Taiz, while forestalling a concerted guerilla offensive from the surrounding rural and mountainous regions. Both Britain and Egypt were under political pressure to limit the number of casualties that would have undoubtedly occurred as a consequences of a more effective large-scale ground operation. Air power in Arabia, however, was limited in its ability to achieve tangible military goals. Rather than subdue domestic opposition, aerial bombardment only fed the flames of propaganda and distrust of a faceless enemy from above. Both Britain and Egypt were forced to make an ignominious withdrawal by the end of 1967, leaving failed states in their wake.

Saudi Arabia and its coalition of Arab and African countries appears to be taking the same path as the failed imperial policies of the 1960s. The Saudi air campaign was originally met with tepid enthusiasm by members of Yemen’s Southern Movement and supporters of Yemen’s ousted, but still internationally recognized President, Abd Rabbuh Mansur Hadi. Many Yemenis were alarmed by the speed with which the tribesmen of the Houthi movement took control of the government in Sana’a and extended their military presence southward in pursuit of Hadi and his supporters. Two and a half months later, the Saudi bombing campaign has evolved from a series of tactical strikes to slow the Houthi military assault into a vendetta bombing campaign against Saudi political opponents in Yemen. Many of the airstrikes are targeting civilian houses belonging to Saleh’s family and friends, factories deemed suspicious and civilian transportation hubs and airports across the country, all of which have questionable military value.

Sitting comfortably in his luxury hotel of exile, President Hadi continues to condone Saudi bombings even as a staggering number of his countrymen have become internal refugees and are suffering a humanitarian crisis of serious proportions. Rather than garner additional public support for President Hadi, the Saudi bombing campaign has only increased the skepticism of his remote government and has instead played into the hands of Houthi propagandists. All the while, it does not seem that the military capabilities of the Houthi tribesmen or the segments of the Yemeni army still loyal to Saleh have been greatly diminished.

Not only have the Saudi’s not been able to slow the Houthi advance, but on June 6, Scud missiles launched by Houthi forces hit King Khalid Air Base, Saudi Arabia’s largest air base and the operations center for the current bombing campaign. Although Saudi officials tried to downplay the attack, which was shrouded in secrecy, it soon became known that Saudi Air Force Commander Lieutenant General Muhammad bin Ahmed Al-Shaalan was killed during the attack. This was particularly shocking to the Saudis as the Shaalan family is nationally prominent and connected through marriage and political alliance to the ruling Saud family.

The attack exposed the disturbing unreadiness of Saudi air defense capabilities and the limits of their air force’s ability to affect military and political outcomes in Yemen. Since the beginnings of the bombing campaign in March 2015, Saudi-coalition planes have faced little anti-aircraft fire, hardly a test of the pilots resolve or training. Even though the Houthis lack armed surface-to-air resistance, the recent Scud missile attack reinforced the fact that the Saudi aerial campaign has failed to eliminate the Houthi coalition’s large-scale military capability.

What emerged from the Scud missile debacle was that an American team is operating a Patriot missile defense system in the vicinity of the King Khalid Air Base, which is also the command center for the U.S. drone campaign in the region. It has been reported that several of the fired Scud missiles were intercepted by U.S. Patriot missiles, the first instance where American forces and Houthis exchanged fire, albeit indirectly. Additionally, the U.S. Air Force has been providing Saudi-coalition planes with satellite imagery and intelligence related to Houthi targets. The emergence of these details has reinforced a propaganda line reiterated on the Houthi cable channel al-Masirah that refers to the Saudi coalition as the “Saudi-American coalition.”

Despite emerging evidence that the Saudi-coalition’s aerial campaign is not only ineffective but counterproductive to the promotion of a political settlement in Yemen, the bombings continue with no sign of concluding. The relentless pursuit of an aggressive military stance towards the Houthi movement is in part a reflection of Saudi Arabia’s struggle against the ghost of Iranian involvement in South Arabia. There is no Saudi exit strategy in which the bombing can stop, short of a complete Houthi political withdrawal. Otherwise, this war will demonstrate a weakness in Saudi policy towards Iran. This aggressive policy is driven in particular by the new Saudi King Salman’s need to exhibit political and military dominance to quiet his many doubters. The Deputy Crown Prince Mohammad bin Salman, the director of operations in Yemen, feels additional pressure to act decisively in order to prove his resolve as the world’s youngest minister of defense at the age of 30.

Even with all of King Salman’s resolve and Mohammad bin Salman’s machismo, the Saudi aerial campaign will be limited by a difficult propaganda war by the Houthis and the same historic terrain that served as an obstacle to British and Egyptian aerial control of Yemen during the 1960s. Saudi Arabia cannot triumph through force of arms alone as its air force has reached the upper limits of what it can achieve against the Houthis. Continuing a fruitless aerial campaign will only foster increasing anti-Saudi political alliance in Yemen and lead to an ignominious withdrawal reminiscent of British and Egyptian withdrawals of the past.

Asher Orkaby, PhD, is a research fellow at the Crown Center for Middle East Studies and is the author of a forthcoming book, The International History of the Yemen Civil War, 1962-68.