Draft Time: This Is Why and How America Should Have Compulsory Military Service 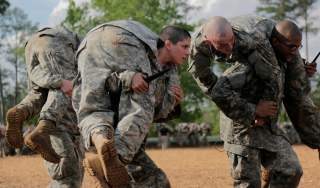 1973 was a pivotal year in American history. After nearly a decade of direct military involvement, the last remaining U.S. combat troops returned home from Vietnam. While the war would carry on for two more years, with U.S. advisors trying in vain to stave off the fall of Saigon, many at home breathed a deep sigh of relief that America’s then-longest conflict was coming to an end.

“Never again” best embodies the Spirit of ’73. Through the 1973 War Powers Resolution (WPR), the United States committed to never again enable the President to prosecute lengthy wars without the express consent of Congress. Additionally, through the 1973 implementation of the All-Volunteer Force (AVF), we committed to never again draft our young men and women into military service. Vietnam had shown Americans the error of their ways, and they corrected their deficiencies accordingly.

The problem is, neither of these “fixes” actually fixed anything. Congress routinely abdicates its responsibility to check the executive branch’s protracted use of military force abroad, as is demonstrated by a conflict in Afghanistan now in its seventeenth year without a formal declaration of war. Also, while AVF implementation has enabled America to sustain its military pre-eminence, this achievement has come at a significant cultural cost.

A civilian-military disconnect looms over our society. The share of the U.S. population with military experience is at an all-time low, with a scant 7.3 percent of living Americans have served in the military at some point in their lives. This means fewer parents of troops, siblings of troops, spouses of troops, and friends of troops. To many, the military are a class of strangers; nameless, faceless beings to whom Americans have no personal attachment. They are an expendable commodity. Well-intentioned as the AVF transition may have been during a time of great national introspection, time has revealed the long-term cultural limitations of such a model.

A correction to the post-Vietnam over-correction is due. Defense of America and its ideals must be made collective again, lest Americans become culturally over-reliant on a small, professional soldiery that shares increasingly fewer social commonalities with the people it is charged with defending. A national service program should augment the current all-volunteer U.S. military. This will foster a culture of universal contribution among citizens and prevent the emergence of a society so internally fractured that it lacks the will and ability to assert itself against America’s many external threats.

But before the critiques are considered, here are some concessions. Most economists agree that the AVF is (ceteris paribus, of course) superior to a conscription model. Conscription generally ignores the opportunity costs of those citizens who could earn higher wages doing something else, which reduces the tax base and increases the net U.S. tax burden. Under conscription, the state must expend resources to mitigate the evasion of those who do not wish to serve. Furthermore, conscripts tend to serve shorter terms and re-enlist at lower rates than volunteers, leading to cost inefficiencies over time. The lower wage rate associated with a draft system also creates an environment whereby cheap, labor-intensive conscripts are used as a replacement for capital-intensive technological improvements, trading long-term efficiency for short-term savings. These were some of the justifications made in 1973 by the many economists advising the Nixon administration to end the draft, and they are valid arguments.

It is unlikely, however, that these economists could have foreseen the U.S. military’s staggering dependence on civilian contractors to facilitate war in the twenty-first century. The United States Army established the Logistical Civil Augmentation Program (LOGCAP) in 1985, with an original purpose of providing regional unified commanders the flexibility to meet supply and service requirements unique to their specific areas of command. What was once a means of funding local, one-off construction projects in far-away corners of the globe has metastasized into a DoD process for awarding comprehensive high-dollar combat service support contracts to private sector firms.

The first such comprehensive contract, LOGCAP I (1992-1997), saw the provision of $824 million in logistical support for U.S. military operations overseas. In the wake of the September 11 attacks, as force projection requirements grew, so did LOGCAP expenditures. At the peak of the Global War on Terror (GWOT) in 2008, $150 billion in defense spending was allocated to private sector firms over ten years through LOGCAP IV. Even today, as the major conflicts in Iraq and Afghanistan have drawn down considerably, solicitation for the $82 billion, ten-year LOGCAP V contract is underway.

Numerous cases of fraud, waste, and abuse have plagued the LOGCAP program. In 2007, the DoD created the independent Commission on Army Acquisition and Program Management in Expeditionary Operations, whose findings called for urgent LOGCAP reform. The commission recommended complete organizational restructuring, legislative oversight, and better training and equipment for both military and civilian contracting personnel.

If only in a small way, the DoD’s dependence on civilian contractors clearly degrades the cost-savings and efficiencies that served as the basis for transitioning to an AVF. But in a much larger way, the cultural costs of this complete AVF transition are beginning to reveal themselves through the lingering wear and tear of the GWOT.

Due to the smaller size of the U.S. volunteer military force, operations tempo has increased at an alarming rate to meet theater personnel needs with a limited pool of professional troops. The typical deployment requirement for a Vietnam War draftee was one twelve-month tour of duty. Troops serving multiple tours in Vietnam were rare. In contrast, volunteers for the Iraq and Afghanistan wars sustained an average of 1.72 tours of duty over the course of the conflicts. Of those who deployed, 43 percent did so more than once. Dwell times between tours of duty averaged 21 months for all service branches, with active duty Marines operating on a measly 15.76 months of time at home with family before going off into harm’s way all over again.

It should come as no surprise, then, that the reintegration challenges faced by new veterans have become an epidemic of national concern. Suicide rates among GWOT service members are 20% to 25% higher than their civilian counterparts. GWOT service members are committing suicide at higher rates than Vietnam veterans did when they returned home from war. Divorce rates among GWOT veterans appear to correlate positively with deployment frequency. This says nothing of the strain placed on those non-marital relationships that cannot be quantified. The American society’s failure to share the burden of a common defense has forced its professional military and their families to pay a volunteer tax that is unsustainable.

Equally worrisome are the deleterious cultural effects the AVF has had on the civilian populace. In 2015, as the Islamic State (IS) gained strength in the Middle East and demonstrated its ability to perpetrate high-profile terror attacks in Europe, 60 percent of American survey respondents aged 18 to 29 expressed support for redeploying U.S. ground troops to Iraq. Yet when asked if they would serve should additional troops be needed to fight IS, 85 percent stated they would not or probably would not volunteer. The Washington Post presented this data with the blunt-but-true headline: “Millennials embrace a long-standing tradition: Letting someone else fight their wars.” Meanwhile, with little fanfare, the DoD stated earlier this year that there may not be enough of “someone else” to sustain the AVF for much longer. For the security of the United States, it is time Americans consider instructing their young people that the great benefits of citizenship come with some daunting responsibilities. It is time America instituted a national service program to save Americans from themselves.

But how? The topic of national service program implementation has been exhaustively debated. A well-known conscription plan presented by Thomas Ricks in 2012 has been criticized for its abridgement of young people’s freedom, and the likelihood that its implementation will be viewed as an affront to the increasingly accepted notion that entitlements are inalienable rights. Ricks’ plan should be criticized (more on that soon), but not for these reasons. In fact, it is these seemingly anti-conscription arguments that affirm the need to return to a conscription model. Americans have come to expect safety, self-determination, and entitlements on the backs of others. The only way to reverse this suicidal cultural fallacy is to foster a society that understands freedom is not free.

The flaws in Ricks’ plan are nested in the intent of his proposal. Ricks’ interest in conscription was ultimately singular: halting U.S. military adventurism. If more American moms and dads are required to send their kids off to die for their country, America’s collective interest in conflict will abate, the United States will go to war less, and America will be better off. This thought process is noble and probably true, but it misses the existential mark.

If America fails to return to a conscription model, cultural deterioration will continue, an insufficient number of citizens will answer the call of military duty, and America will not be able to go to war. A national service program should not be implemented simply to limit U.S. involvement abroad (noble as that end may be), but to ensure that America possesses in perpetuity the ability to involve itself abroad when it is in the national interest.