Dredging Up Disaster in the South China Sea 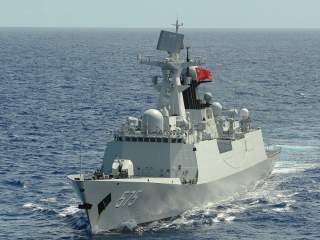 Chinese dredging operations add an interesting complication to the debate over sovereignty, control, and conflict in the South China Sea. The Spratly Islands are presently claimed by both China and the Philippines. Each party to the dispute makes claims that are intended to define the interpretation of events. However, it is not always the case that these interpretations fit the facts. As part of their efforts to assert their claim to ongoing sovereignty in the area, China is engaging in significant dredging operations there. The Chinese are involved in dredging operations on five different reefs and has created some 2,900 acres of land in the Spratlys. This behaviour sits within murky and sometimes undefined legal frameworks, but often clashes with Beijing’s official reasoning for their behavior.

Facing a drastic military imbalance, Manila based its protest to China’s behavior within a legal framework. Their position hinges on a number of legal documents including the 2002 Declaration of Conduct in the South China Sea. This is firstly tenuous because Beijing is not a party to this document. However, their case draws strongly upon section five:

5. The Parties undertake to exercise self-restraint in the conduct of activities that would complicate or escalate disputes and affect peace and stability including, among others, refraining from action of inhabiting on the presently uninhabited islands, reefs, shoals, cays, and other features and to handle their differences in a constructive manner. -2002 Declaration of Conduct in the South China Sea, Part 5

The Philippines assert dredging operations are designed to assist in placing Chinese infrastructure on islands that have thus far been uninhabited. Indeed, when looking at the photographs of the area taken by supporters of the Philippines and visiting journalists, it appears that this is exactly what China is doing. While it is perhaps too early to unpack how exactly this strategy will impact ongoing tensions over sovereignty in the South China Sea, it is possible to discuss some of the advantages China can gain from this situation.

There has been a direct link between the cultivation of these islands and the development of Chinese infrastructure in the area. One of the dredging operations located in the Johnson South Reef appears to have created enough space for the building of an airstrip. A possible interpretation of Chinese behavior could be the that China is simply seeking to hand off day-to-day operations in the area to land-based forces, rather than relying on maritime capability. As such, it might not be prudent for states such as the Philippines to see this as an intended provocation. China could see this behavior as not violating the status quo. Notwithstanding this, the occupation of previously uninhabited islands is unlikely to undermine the narrative being put forward by Manila that China is attempting a slow takeover of the area.

The occupation of these islands also impacts on the status of islands themselves. This has flow on impacts to the kind of territorial claims that China is making in places like the Johnson South Reef. Although the Philippine government has protested these actions under its agreements with ASEAN (an association in which China is an observer of, but not a full member), the legal case does not necessarily favor Manila. The United Nations Charter on the Law of the Sea (UNCLOS), an agreement to which both China and the Philippines are signatories, states:

3. Rocks which cannot sustain human habitation or economic life of their own shall have no exclusive economic zone or continental shelf. - UNCLOS Part 8

This means that if China were to occupy these islands, their status under UNCLOS might change and result in claims to a significantly greater exclusive economic zone in the area.

An occupied island sustains a 12 nautical mile territorial zone, but China’s relationship with Exclusive Economic Zone (EEZ) territory is quite complicated. Certainly China has a great deal to gain in terms of economic space from these dredging operations but UNCLOS does not allow that same economic territory to be policed as territorial waters. Beijing, however, has ambitions to change the way EEZ space is considered under international law, preferring a view that allows them to maintain a monopoly over legitimate military deployment in the area in the same way territorial zones are defined. This debate impacts significantly on China’s relationship with the United States, but it also relates to the sort of gains Beijing is seeking to make by converting these islands into inhabited islands. China is therefore seeking to exploit the definitions of UNCLOS whereby an artificial island does not have status, but an inhabited island does. China is attempting to convert uninhabited islands into inhabited ones while bypassing the claim that they are ‘artificial’. This area of international law is untested.

China, for its part, has not confirmed the construction on these islands. During a regularly scheduled press conference the BBC asked the Ministry of Foreign Affairs (MoFA) spokesman Hua Chunying about the construction. Ms. Chunying replied that she had already answered the question many times before and argued that because the islands fall within China’s sovereignty whatever they do there is entirely justified. The question of their status is still open to interpretation and they may well not sit under China’s sovereignty at all. Islands capable of supporting life are entitled to territorial sovereignty but purely artificial islands are not. China’s claim as to their status under UNCLOS is tendentious given both their historical claim and the reality that much of this is not legally tested. China does not wish to confirm the construction but Beijing has offered a defense for it. An editorial section of the People’s Daily went further in putting forward a Chinese official position which argued that China’s actions were a result of longstanding efforts on the part of other states to claim additional territory in the area. The authors contended that China simply could stand by while Hanoi and Manila claimed additional territory. This means that China is more or less ignoring the debates around key terms. It is worth pointing out that both Vietnam and the Philippines have also sought to develop capability in the South China Sea.

The position put forward by China is more or less consistent with the events on the ground. The Philippines and Vietnam have both pursued a strategy of occupying territory in the area to bolster their claims. So China is, legally speaking, behaving just as legally or illegally as the other parties to these disputes. As a result of this, Chinese ministry officials are noticeably frustrated by their inability to communicate their view that they have been reactive rather than proactive. This is probably due to the reality that China is still adjusting to the extra attention the more powerful party to a dispute generally gets. Beijing may be seeking to act in a similar fashion to the other parties to these disputes but these actions will be interpreted within the reality that China is substantially more powerful. Further, the magnitude of what is being undertaken by China outstrips the efforts of other states and that undermines the narrative put forward by Beijing.

This international debate ties into the much larger discussion over China’s increasing power. For example, even if Beijing were to behave with more restraint and only match the efforts of the other states involved, its greater power would still make those efforts appear more threatening. China could be interested in pursuing its longstanding diplomatic narrative on the South China Sea that the states involved are equals, but its actions add credence to a conclusion that China is exploiting the extant power differential between them. Beijing rules out multilateral negotiations to solve disputes in the South China Sea, instead preferring direct bilateral solutions. In other situations, such as North Korea, China has preferred multilateralism.

This means China’s military preponderance is at odds with its intention to be seen as an equal party to the dispute. Essentially, China is attempting to be seen as overwhelmingly powerful on the ground but diplomatically equal with the other parties, something that has unsurprisingly failed to play well outside of Beijing.

China’s preference for direct negotiation places a smaller state into a much lower bargaining position than they would get as a party to a larger complaint. These things taken together lend credence to the idea that China is trying to slowly maximize its gain in the South China Sea and that the dredging operations exist in line with those aims. As such, this then undercuts China’s claim that it is reactive and gives outside observers reason to doubt their intentions. Beijing therefore cannot expect other parties to the dispute to be convinced by its arguments which means it will most likely use those arguments as a fig leaf and then rely on changing the balance of power on the ground, rather than moving through a diplomatic process.