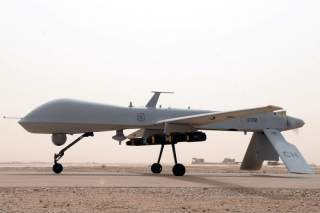 If America can use drones to spy on Al Qaeda terrorists, then why can't it use them to stop illegal immigrants?

In theory, drones and border security should have been a perfect match. A predator drone can keep a robotic eye on America's vast borders, saving money and personnel while maintaining continuous watch for illegals.

But an audit by the Department of Homeland Security's Inspector General finds that despite high hopes for its border drone program, "its impact in stemming illegal immigration has been minimal." In fact, Customs and Border Patrol's fleet of 10 Predator-Bs have accounted for less than 2 percent of illegal immigrants apprehended.

Investigators found a border drone program in disarray. Some of the ills cited include:

-CBP drones are supposed to be flying 16 hours a day, 365 days a year. Instead, they only managed to fly 22 percent of those flight hours.

-CBP claimed its fleet of 10 Predator-B drones cost $2,468 per flight hour. But auditors discovered that this figure did not include the cost of pilots, equipment and overhead. The real number? $12,255 per flight hour.

-Of the 1,993-mile southwest border with Mexico, the Predators primarily covered just 100 miles along the Arizona border and 70 miles in Texas.

-Drones were supposed to save money and manpower by responding to alerts by ground sensors, rather than having to dispatch Border Patrol agents. But investigators found few instances where this happened.

-CBP lacks internal performance measures to even assess whether the program is successful by its own standards.

"Notwithstanding the significant investment, we see no evidence that the drones contribute to a more secure border, and there is no reason to invest additional taxpayer funds at this time," said DHS Inspector General John Roth. "Securing our borders is a crucial mission for CBP and DHS. CBP’s drone program has so far fallen far short of being an asset to that effort.”

Besides failing to secure our borders, border-patrol drones raise serious civil liberties issues, as watchdog groups have long warned. Will they just track illegals, or will American citizens be inevitably caught on the camera mounted on every Predator? In addition, two CBP Predators are equipped with a Pentagon-designed radar with the ominous name of VADER (Vehicle and Dismount Exploitation Radar). Originally designed to spot the Taliban in Afghanistan, VADER can't distinguish between lawful American citizens and border crossers.

Last January, the Electronic Frontier Foundation revealed that CBP has lent its Predator surveillance drones 700 times to numerous other agencies, from the FBI to the Minnesota Bureau of Criminal Investigation and the Texas Department of Public Safety.

The DHS audit shows "the lack of oversight and transparency endemic to CBP's program," Jennifer Lynch, an attorney for the Electronic Frontier Foundation, told The National Interest.

"We saw this when CBP released information in response to our FOIA lawsuit seeking records documenting the times CBP flew its drones on behalf of other agencies. Even though CBP had only told DHS OIG and reporters about a handful of these missions, we learned the agency had flown its drones 700 times between 2010 and 2012 on behalf of federal and state agencies including local sheriff’s departments. The public needs to know more about these missions, but this latest OIG report shows CBP has not improved its reporting or tracking capabilities at all since the May 2013 OIG report."

What is most disturbing about the border drone fiasco is that violates a contract. There has long been an implicit bargain between the U.S. government and its citizens. Whether it was FBI wiretaps during the Cold War or TSA making airline passengers take off their shoes, the deal was that Americans were supposed to receive increased security in return for real or potential encroachments on their privacy and civil liberties.

The fact that such sweeping measures have been approved or tolerated suggests that despite the grumbling at airport checkpoints, the American public is willing to abide by the bargain. Now it turns out that the government's border surveillance drones can't even secure the border.

So where's the bargain for the rest of us?

Michael Peck is a contributing writer at Foreign Policy Magazine and a writer for the War is Boring defense blog. You can follow him on Twitter: @Mipeck1.