Drugs and Political Decay in Venezuela 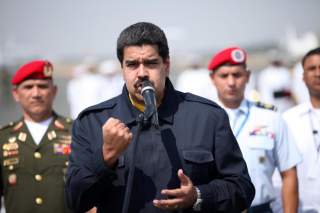 President Nicolás Maduro and his United Socialist Party of Venezuela (PSUV) are probably heading toward defeat in the country’s upcoming parliamentary elections on December 6. If so, this would be the first defeat for the forces of the “Bolivarian Revolution” in legislative elections since 2000. Such news would be a major development in the region, as it would raise questions over the longevity of Caracas’s left-wing regime and its network of anti-U.S. relationships throughout the Caribbean and Latin America.

Part of the problem facing the PSUV is that its economic management of the country has been dismal. The other problem is that the government is increasingly dysfunctional and penetrated by drug money. In early November, two of President Nicolas Maduro’s wife’s nephews were arrested in Haiti and extradited to the United States, where they are facing charges of conspiracy to smuggle 800 kilograms of cocaine into the country. While President Maduro responded to the arrests as “attacks and imperialist ambushes,” the linkage of the illicit drug trade to the ruling family points to the heart of political decay at work in Venezuela.

Evidence of the Maduro government’s epic economic ineptitude is mirrored in the rationing of many daily staples (like toilet paper and milk), inflation heading toward 159 percent this year and higher next year (according to the International Monetary Fund or IMF), a fiscal deficit expected to be over 16 percent of GDP for the year, and growing concerns over the country’s ability to repay its foreign debt. According to the IMF, the economy contracted by 4 percent last year; it is expected to contract by another 10 percent in 2015 and yet another 6 percent for 2016. Together with one of the world’s highest homicide rates, Venezuelans have plenty to be dissatisfied about.

Venezuelan economic policy traditionally relied on high oil prices to drive growth. When Hugo Chávez was elected president in 1999, he benefited from rising oil prices, which allowed him to move the country leftward, driving out foreign companies (mainly U.S. and European), muzzling opposition voices and redistributing income to the poorer parts of society. Petrodollars also gave Chavez the means to pursue an aggressively anti-U.S. foreign policy in the Caribbean and Latin America.

When Chavez died in early 2013, Vice President Maduro, a former bus driver and union leader, assumed the presidency, an office he won later in the same year despite significant questions over the validity of the electoral results. Maduro, however, lacks Chavez’s charisma. He also had the bad luck to have been in office when oil prices plummeted. In the face of a sharply declining economy and an inability to contain inflation, Maduro is increasingly pressed by public discontent and an emboldened opposition—which has continued despite the arrests of many of its leaders and a clampdown on most independent media outlets.

The poor condition of Venezuela’s formal economy has left the door open for the penetration of the drug trade into the country. According to the State Department’s International Narcotics Control Strategy Report (March 2015), “Venezuela is a major cocaine transit country. The country’s proximity to drug producing countries, an ineffective AML (Anti-Money Laundering) regime, limited bilateral cooperation, and endemic corruption throughout commerce and government, including law enforcement, continue to make Venezuela vulnerable to money laundering and other financial crimes. The main sources of laundered funds are proceeds generated by drug trafficking organizations and corruption in Venezuela’s currency control regime.”

Venezuela’s rise as a major drug transit state is also the offshoot of a clampdown beginning in 2013 on Central American and Mexican transit routes. Although cocaine and other illicit drugs still make their way across the U.S. border with Mexico, activity on the Venezuelan route increased, a development helped by the collapsing economy and corrupt officials.

The involvement of high-ranking Venezuelan officials was evident in September 2013, when French authorities, working with their British, Dutch and Spanish counterparts, made a $270 million cocaine seizure carried on an Air France flight. Significantly, the Venezuelan authorities were not included in the operation. Indeed, there were questions as to how 1.4 tons of cocaine made it through a dozen army checkpoints on its 500-mile trip from Colombia to the Simón Bolívar International Airport outside of Caracas and then to Paris.

Another look into the inner workings of the drug trade in Venezuela came in January 2015, with the defection to the United States of Leamsy Salazar Villafaña. Salazar was one of Chávez’s chief bodyguards until the President’s death in 2013 and regarded as a regime loyalist. He then worked as a member of Diosdado Cabello’s security detachment. Cabello is the powerful president of the Venezuelan National Assembly and, according to Salazar, he is also the ringleader of the shadowy Cartel de los Soles (the Suns Cartel), allegedly run by some of the country’s top military and political figures. Along these lines, Salazar personally witnessed Cabello dispatching cocaine shipments overseas in aircraft owned by the country’s oil company (PDVSA). Moreover, Cabello’s brother was fingered to be the cartel’s money man.

In this light, the arrests of two of President Maduro’s extended family has a degree of significance. The two men involved are nephews of Cilia Flores, the first lady. She was a lawyer for Chávez in 1992 after his failed coup attempt, became part of the líder máximo’s inner court, won a seat to the National Assembly in 2000, served as its speaker in 2006 and was a founding member of the PSUV in 2008.

Flores has a reputation for being somewhat “Stalinist” in her views and willing to make use of nepotism. Indeed, another of her nephews holds three of Venezuela’s key financial posts: national treasurer, chief financial officer at PDVSA, and director of the country’s development bank. Flores is running for re-election in December. She has a large role in the government’s direction; the taint of drugs could jeopardize that power.

The Maduro administration has consistently claimed that U.S. and European allegations are part of an international conspiracy to smear Venezuela’s march to socialism. Caracas also points to arrests and seizures that occur in the country. Venezuela considers U.S. sanctions, imposed in 2015 on some of the country’s officials, to be part of Washington’s effort to destabilize the Maduro government.

Looking ahead, President Maduro could take the arrests of his family members as a threat to his government and declare a state of emergency which would allow him to postpone the elections and hold them at a more opportune time—if at all. President Maduro stated in early November that he “will not give away the revolution” and “that the government will win by all means”.

Political polarization in Venezuela is already acute; postponing the December elections would only increase tensions, probably forcing people out into the streets—again. It could also result in government insiders, seeking to protect their power and wealth, to oust Maduro. Government insiders would either to find some way of reaching accommodation with the opposition on a new president or interim figure or would have to blatantly use military force to install a more hard-line government. Another option is that the hard-left government would have to work with an opposition-dominated National Assembly, which Maduro would probably find difficult.

No matter what happens on the political front, Venezuela’s status as a drug transit state will continue until a government in Caracas really wants to clean house. Under the current circumstances, Venezuela appears set to lurch into a new crisis and its political decay will become more problematic for its citizens and the region. And the drugs will continue to flow.