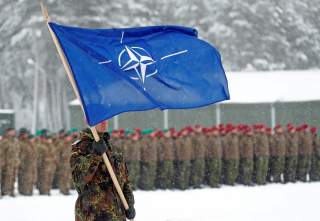 Secretary of State Mike Pompeo was in Hungary on Monday, marking the thirtieth anniversary of the end of communism in what became New Europe—the Central European nations where capitalism, Western Civilization, and support for America attract broad public support. Hungary is an appropriate start to Pompeo’s week in the region to strengthen ties. He cited Hungarians’ historic and sometimes costly stands against oppression in 1848, 1956, and 1989.

This warm and improving relationship contrasts with the state of declining and anti-American powers of Old Europe, especially their chief vehicle for freeloading: NATO.

Eager to save an alliance for which the rationale of American membership is dwindling, NATO Secretary General Jens Stoltenberg recently claimed that NATO members have offered an extra $100 billion in defense spending over two years. The statement was meant to flatter President Donald Trump for the pressure he has placed on NATO members to spend more, and to dissuade him from reported thoughts of withdrawing the United States from the alliance, which he can do unilaterally.

There’s only one problem with Stoltenberg’s claim—it’s make-believe.

Certainly an extra $100 billion from other NATO members would be appealing. The United States spends more on defending Europe than the rest of NATO combined. Germany, France, and the rest of Old Europe spend significantly less than the 2 percent of GDP they have pledged to expend on defense. Aside from the United States, only Britain, Poland, and a handful of small countries meet the requirement.

Has there been a great about-face, as Stoltenberg suggests, with alliance members rising to the occasion? Have they grasped the fundamental unfairness of America funding their defense as they abuse us on trade, and, if opinion polls are to be believed, look down their noses at us, with only thirty-four percent of French and thirty percent of Germans saying they have a favorable view of America?

Patently not. There is little evidence for Stoltenberg’s claim that NATO members have started taking their obligations seriously.

Consider the biggest economies and militaries in NATO. Despite having Europe’s largest economy, Germany’s defense budget is just under $50 billion (America’s exceeds $700 billion). Recently, the German Finance Ministry cast doubt on the nation’s ability to meet even its stingy and questionable commitment to increase defense spending gradually to 1.5 percent of GDP by 2024.

Britain is doing slightly better with its plan to increase defense spending by half of 1 percent through 2020. But new funds in the current year amounted to only about $1.3 billion, and there are doubts if the increase can be sustained amid the country’s own political chaos.

Europe’s third-largest economy is France. Last July, French president Emmanuel Macron pledged to increase defense spending by $2.1 billion. But as the French economy slows and amid populist protests that have brought crisis to France, even sustaining this modest increase is doubtful.

Italy has vowed to slash $500 million from its defense budget this year.

Turkey is an outlier, and it has NATO’s largest army except for America. It increased its defense spending significantly in recent years, especially in response to the long war in Syria. But no future increase is likely.

So where is the $100 billion of which Stoltenberg spoke, especially if NATO’s heavyweights are likely to offer increases of only a few billion dollars, if that? Who is coughing it up? Spain? Portugal? Greece? It appears as though this claim goes beyond mere creative accounting and double-counting. It’s make-believe—parlor talk and sweet nothings whispered in jest.

But wait, there’s more. Stoltenberg also threw the United States under the bus this month with respect to the U.S.-Russia Intermediate-Range Nuclear Forces Treaty, which the Trump administration is wisely abandoning amid credible, long-running reports of Russian noncompliance. Ever unhelpful, Stoltenberg promised Moscow that NATO’s European members will stick with the treaty. So much for solidarity and common defense.

Meanwhile, you’ll be elated to learn that Greece has dropped its objections to Macedonia becoming yet another new member of NATO, which makes it a fait accompli. Thus the United States will be obligated to guarantee the defense of yet another country that the vast majority of us couldn’t find on a map, and which offers nothing to America’s defense, but whose addition will reinforce Russian paranoia.

Stoltenberg deserves credit for a bold if mendacious public relations move, which he seems to be getting away with. But his mendacity doesn’t change the increasingly obvious reality that NATO is little more than a mechanism for Old Europe to freeload off of America. A rich continent with a $17 trillion economy—more than ten times the size of Russia’s—does not need America to underwrite its defense.

Furthermore, most of the countries in Old Europe have chosen atheism, globalism, multiculturalism, and decadent decline. What exactly are we defending?

Let’s partner with NATO as a non-member, like Sweden, and focus the finite resources we can spare from the critical contest we face with China in the Pacific to the countries of New Europe that still have fight in them, and which still carry the torch of Western Civilization.

Let’s take Poland up on its offer to build a Fort Trump, position heavy forces in that hearty pillar of the West, close our other European bases, and cooperate with the Baltics to ensure they can deter any future Russian attempts at the hybrid warfare Moscow used successfully in Georgia and Ukraine. That will be a better defense than underwriting the mendacious cheapskates of NATO and Old Europe, most of whom disdain us.