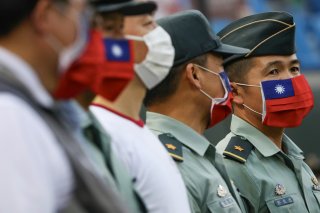 Amid coronavirus, Taiwan has become an epicenter of international geopolitics between China and the United States at the World Health Organization (WHO). The sovereign democracy has a complicated history with the two economic powers and has now arrived at a crossroads of political and economic challenges—with a perceived military option as a last resort.

The longstanding Chinese conviction is that Beijing will ultimately unify the island through “force” if need be, as Chinese president Xi Jinping claimed. Meanwhile the United States’ new TAIPEI Act (Taiwan Allies International Protection and Enhancement Initiative) has all but removed the ambiguity of the “one China policy” that helped maintain the status quo since Washington recognized Beijing in 1979.

With two pro-nationalist administrations in Taipei and Washington, unprecedented political and military advances at the level of bilateral relations raise ambivalent sentiments. The re-elected President Tsai Ing-wen will soon have to deal with three political and economic challenges after her second inauguration on May 20. She will eventually be forced to address the response to the cross-Strait issues from China’s annual “two sessions” congress rescheduled for May 21–22 in Beijing.

Premature Death to the American Legislation

Anticipating a range of direct Chinese responses, the Tsai administration must first prepare strategic solutions to the likely situation of Beijing halting Taiwanese imports, which comprised over 40 percent of Taiwan’s total trade in 2019. More importantly, trade relations with China accounts for $50 billion—a critical source of Taiwan’s annual trade surplus. This could easily come in the form of forcing Taipei to label “the originality of products from ‘Taiwan, China.’” This would be an old but a brilliant Beijing strategy: forcing Taiwan to align more with the “one China policy” and circumventing the TAIPEI Act. This strategy would present the United States with an early casualty of economic warfare while foreshadowing to the Trump White House the yet-to-come implications of its own “trade war” with China.

The political calculations in President Donald Trump’s re-election campaign and the White House’s prevailing discussion of strategy to impose tariffs on the bilateral trade deal with China would negatively impact Taiwan’s prospects for better cross-strait relations. The Trump White House has neither viable economic endowment nor credible diplomatic power, lacking support and trust from even its European and Asian allies and friends. Obviously then, the TAIPEI Act will hardly be an effective strategy to convince or force other countries to side with the United States in a political standoff with China. There are hardly any exports that the United States needs from Taiwan that could not otherwise be redirected from China. Taiwan’s geographic proximity, bilateral investment relations, inherent connectivity of global value chains, historical linkages, and shared language are increasingly in China’s favor.

Second, the Economic Cooperation Framework Agreement (ECFA) signed between China and Taiwan in 2010 is another upcoming challenge for the Tsai administration if China decides to withdraw it or curtail the mutual economic benefits and tariff advantages. About 5–7 percent of Taiwan’s overall trade—mainly petrochemical, textile, electronic components, and agricultural products——entitled to zero-tariff privileges on the “early harvest list” would be seriously affected.

The most critical part of ECFA may not only be on economic give-and-take but more on the prospects for political uncertainty. Thus far, there is no clear sign as to what extent the Tsai administration will proceed. Under the prevailing negative political atmosphere in the cross-Strait relations, should ECFA be discouraged, it will imply a direct warning to Taipei.

Third, it is unlikely that China would repeat a military action to take possession of Taiwan’s island-territories as it did in the past, involving the U.S. evacuation effort. Instead, China will most likely use nonmilitary tools for political ends while putting economic pressure on the Tsai administration. For example, Beijing could further shrink Taiwan’s international space through sharp-power economic diplomacy and its growing political influence on other countries, which would dim Taipei’s hope for the resumption of cross-Strait relations.

Sustained maintenance of China’s Liaoning Aircraft Carrier, reconnaissance aircraft data missions, and submarine patrols in the Taiwan Strait are also part of this auxiliary pressure strategy. The U.S. counter-military strategy in the cross-Strait and the South China Sea might continue but Beijing’s economic strategy seems to be more effective as shown in the Philippines, Sri Lanka, and elsewhere.

Rhetoric Is Not Strategy

The politics of rhetoric is an asset in a political campaign as Trump is focusing on his own re-election campaign with a strategy of China-bashing against his opponent. If history is a guide in dealing with the United States and its evolved relations with China on the basis of economic and trade interests, then the Tsai administration needs to rethink its antagonizing approach to its increasingly powerful neighbor whose relations go beyond politics of noise.

Throughout the coronavirus pandemic, spreading since January 2020, Taipei has followed in Washington’s footsteps of vocal criticism of China’s cover-up of the coronavirus from the onset and openly slashed WHO. The emerging domestic nationalism and populism are supercharging the course of public opinion and netizen sentiments. In the short run, it may look good as a positive performance of the ruling administrations in Taipei and Washington. Strategically, however, it may backfire in the post-coronavirus contest of Sino-American geostrategic rivalry and Washington’s decoupling rhetoric and blame-game tactics for myopic political ends. In her second term, Tsai needs to quickly find a way to engage with China rather than speculate over the residual advantage of Sino-American rivalry.

Political tensions across the Taiwan Strait have been reinforced during the coronavirus pandemic. The last thing that Taiwan should want to do is to provoke Beijing with direct and indirect actions to push for independence. Garnered by the Trump administration’s anti-China political campaign and Taiwan’s domestic anti-China populism, the ruling Democratic Progressive Party of Taiwan prepares to push the envelope through a legislative proposal by denying “national unification” to be an alternative future between mainland China and Taiwan. A new turbulence may soon shake regional stability and peace. It would become an unprecedented challenge for Tsai when she begins her second term.

Dr. Patrick Mendis, a former American diplomat and a military professor, is a Taiwan fellow of the Ministry of Foreign Affairs of the Republic of China and a distinguished visiting professor of global affairs at the National Chengchi University (NCCU). Dr. Fu-Kuo Liu, a research fellow of the Institute of International Relations and a professor in the International Doctoral Program of Asia Pacific Studies at NCCU, is the director of the Taiwan Center for Security Studies in Taipei. Their views expressed in this analysis do not represent the official positions of the current or past affiliations of their institutions nor the respective governments.