Earning the Rockies: How Geography Shapes America's Role in the World 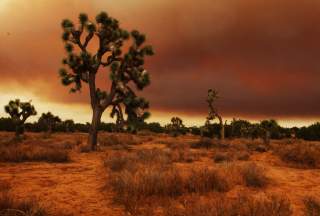 The unceasing jungle in the Nevada desert of absurd, crooked, corroded, pulsing neon signs advertising gambling and related entertainments stops suddenly, as another sign announces, “Welcome to California.” The desert is once again pristine, something further enhanced by the mirrored, futuristic magnificence of the Ivanpah Solar Power Facility, built only a few years ago and in its own way almost as visually stunning as the Hoover Dam—as though the creation of a more advanced, alien civilization. The Hoover Dam, evidently, already has its successors, testimony to American ingenuity, and yes, an extension of the frontier ethos.

Barstow, California, is in the midst of the Mojave Desert, a cindery wilderness bleak beyond imagining. My father used to reminisce about crossing the southwestern desert, while looking at the walls of the bedroom in our apartment as if still blinded by the sun. The hotel here is bordered by the bus station and dusty outlet stores. The one-story tract homes and low-end chains generate the aura of an archaeological site, as if the town will one day soon be abandoned. Dining out gets no better than Chili’s. Some of the clientele, I can tell from the conversations—so banal and technical—are contractors at the nearby Fort Irwin National Training Center, where the U.S. Army prepares for present and future battles, from set-piece engagements to counterinsurgency: the landscape here is conducive to imagining the Middle East. In the restaurant, there are families and extended families, too, and young people. Everyone is naturally polite and speaks in low voices despite the music. As flimsy as the surroundings are, the social glue appears firm and wholesome even. The lack of aesthetics fits with America’s inherent practicality, which culminates in the strip mall, the defining urban design of Barstow.

I am almost at the Pacific now, yet I am still in the midst of a tenuous desert culture. The landscape here is no friend to nationhood. The nation has been created farther back, earlier in my journey, where the prairie meets the Great Plains, and has had enough force to extend itself here, and then only by later working backward from the Pacific. Even so, the spaces between have not been filled in: rather, linear arteries of civilization have been forged from one point to another. The social glue at Chili’s is the culmination of this entire process.

Indeed, Barstow was the southwestern outpost of the Mormon Corridor, a stop on the Old Spanish Trail, a place where the army encountered the Paiutes, and where the Union Pacific Railroad first met up with several interstates at the halfway point between Las Vegas and Los Angeles. This makes Barstow a transport hub for the Greater Los Angeles suburban sprawl stretching east into the desert, which is otherwise known as the Inland Empire. Of course, these are ready-made, disparate facts available from any encyclopedia. What unites them is that they all—the trail, the railways, the roads—have to do with the final imperial occupation, settlement, and development of the temperate-zone continent. Here is where, for the first time in my journey, I feel the immediacy of the Mexican border at the country’s southwestern extremity. Though conquest is not pretty, power is relative. Whatever moral and geopolitical contradictions there are in America’s cartographic situation and how it came to be, America’s domestic condition is far more advantageous and, yes, moral compared to those of Europe, Russia, China, or India in the early twenty-first century.

In Barstow, a half-day’s drive from the Pacific and from the Mexican border, I thought about America’s competitors.

Europe, seventy years after the beginning of the postwar unification project, is bedeviled by internal contradictions based, at root, on geography, history, language, and ethnicity. The development patterns of northern Europe, Mediterranean Europe, and Balkan Europe are still very much distinct, no matter the excep- tions. European Union members Greece and Bulgaria, for example, are destitute third world countries in comparison to Germany and France. Because of these vast differences, European states still make decisions overwhelmingly on national interest rather than on any pan-European interest. The Eurocrats in Brussels may think in terms of Europe, but the European street thinks otherwise. Meanwhile, to the east, Europe is threatened by Russian aggression abroad and Russian weakness at home, with all of its disintegrative tendencies; to the southeast Europe is threatened by a chaotic and radicalized Middle East; and to the south by migrants from North Africa and sub-Saharan Africa both, as Europe’s southern border is not the Mediterranean—which is really a connector—but the Sahara Desert. Europe’s era of internal cohesion may already be past.

Russia covers half the longitudes of the earth, an area nearly unfeasible to unite. It is further disunited by wide rivers that flow vertically rather than diagonally, unlike the rivers that cross the American continent. Thus, Russia has been nearly impossible to govern except by the most ruthless central control. Russia has few defensible borders, which makes it the ultimate insecure land power. Throughout history, this has caused Russia to be particularly aggressive. Autocracy has come naturally to Russia the way democracy has to the United States. As deterministic as all this sounds, there are few indications that Russia’s political future will be much brighter than its past. Its population is declining, except for the Muslim and other minority elements, and President Vladimir Putin’s most significant political enemies are to his nationalistic right, not to his democratic-trending left.

China, unlike Russia, occupies the temperate latitudes like the United States. It has thousands of miles of coastline in the east and reaches toward energy- and mineral-rich Central Asia in the west. Its pace of development over more than a third of a century has been breathtaking—like that of the United States between the end of the Civil War and the outbreak of the Spanish-American War, the war that first announced the United States as an imperial power. But whereas the United States is the neighbor of two oceans and a sparsely populated, middle-class Canada, with only populous and still-poverty-racked Mexico as a geographic challenge, China must deal with nearby American allies Japan, South Korea, the Philippines, Australia, and so on. And this is not to mention Russia, China’s historical adversary, or the unstable and nuclear-armed totalitarian state of North Korea. Even within their borders, the Han Chinese face off against longtime historical enemies: Turkic Muslim Uighurs, Tibetans, and Inner Mongolians. China is an authoritarian state that fears political liberalization because, among other things, it could lead to more unrest in these minority areas. Still, such increasing unrest may be unavoidable because whatever problems the U.S. economy has, and however unbalanced the distribution of wealth is inside the United States, China’s economic tribulations—coming off its long boom—are far more profound and structural. No, China is not about to supplant the United States as the greatest world power. And even if it could, the argument that a Chinese-dominated world would be safer and more humane than an American-dominated one is, frankly, weak to the point of absurdity.

India possesses eminent geographic logic, framed as it is by the Arabian Sea, Bay of Bengal, Burmese jungles, and the Himalayan mountain system. Nevertheless, India has lacked a singular building block of demographic organization like China’s Wei Valley and lower Yellow River. India’s river system, in general, divides more than it unites. India’s tropical latitudes coupled with the history of invasions from the northwest have historically weakened governing continuity and economic development. Of course, India is politically stable, manifestly democratic, and driven by a national purpose. India has great possibilities. It can be a great pivot power in twenty-first-century politics. But it simply lacks the capacity to truly compete or overtake the United States in the near- or middle-term future.

This is all obvious enough. But it must be mentioned simply in order to demonstrate that at least in terms of conventional geopolitics, the United States still has no real competitors. Geography remains an overwhelming advantage and source of American power. I have traveled for many weeks from east to west across the most impressive political geography in the world, or in history for that matter.

Robert D. Kaplan is the author of Earning the Rockies: How Geography Shapes America's Role in the World, from which this piece is excerpted. He is a senior fellow at the Center for a New American Security and a senior adviser at Eurasia Group.