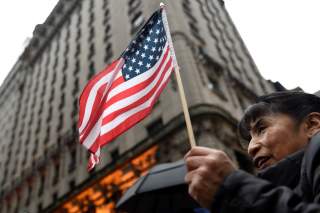 In recent years, a foreign-policy community once focused on a managed decline in U.S. global predominance has witnessed the birth of a disquieting new phase. The European community is closing its borders and debating Brexit; nationalism and ethnocentrism is on the rise in rich-nation political parties; the Trump administration is working to exit major trade agreements. The Western political community is no longer retreating from occupation of hostile territory, but to appearances, from its own institutions.

Scholars have named the institutions, rules, and international cooperative activities of the post–World War II era the “Liberal International Order” (LIO), and various efforts are made to measure its growth or decline. Previous efforts to assess the state of the LIO have been torn between notes of genuine concern, and significant vagueness on just how much concern to have. Not all of the metrics chosen have shown much change since the 1990s. Global trade is down 14 percent from 2007—noticeable but not transformative. Global UN membership has not recently declined. Scholars and analysts hesitate to declare defeat in the face of contrary indicators.

These reports may be missing the severe threat to global democracy that emerges from data on the impact of ongoing economic decline. Whatever you have found shocking about Western political developments in recent years is roughly what you’d expect to be happening after a large-scale review of countries facing similar economic experiences.

The real threat today, and the essential problem, stems from a single fact: the health of the world’s democracies turns out to be crucially dependent on their economic growth rate. This is especially true of “consolidated democracies,” countries that have established a stable precedent of peaceful power transfer over several or many electoral cycles. The world’s leading consolidated democracies—wealthy and powerful nations to include the United States, the nations within the European Union, and other large U.S. allies, such as Japan, have seen rates of economic growth consistently and persistently decline over the past forty years. In the United States alone, GDP growth has averaged 1.79 percent per year since the year 2000, after averaging 3.35 percent between 1968 and 2000. Median household income, somewhat infamously, has shown negative net growth between 1999 and the present year, after generally growing between between 1945 and 1999; work by McKinsey & Company generalizes this trend to the majority of high-income liberal democracies.

Could poor economic performance shake the foundations of their stability or their commitment to the order? My work on a recent assessment suggests: Absolutely, it can; absolutely, it is; and by no means can we assume that the worst is over. Complex phenomena have complex causes, but economic stagnation is enough to produce exactly the institutional failures we’re living through. And economic stagnation continues in the United States and beyond it.

To begin with, there is clear evidence that negative and declining economic growth leads to increased political volatility, including in democracies and in rich nations. Various studies have found a relationship between strong economic performance and the electoral survival of incumbent governments for both high-income countries and for developing countries. Other analyses suggest that global economic crises in European democracies generally increase electoral volatility and party fragmentation. Bertoa (2014) compared elections before and after several global economic crises in European democracies, and found that they generally increase electoral volatility and party fragmentation. That analyses included the 2008 financial crisis, which is where Bertoa found volatility and fragmentation to have risen in 80 percent of Western European countries.

A lot of what leads some scholars and studies astray on this topic is an overly short-term evaluation. The effects of economic hard times can vary in their immediate aftermath; shocks can give way to recoveries and ruin time-bounded correlations. It’s not always the first election after the shock that unseats an incumbent. But when you scratch an example of drastic political volatility in a developed country, you often find a period of extended poor economic performance within the past ten to fifteen years. France’s second election after the financial crisis represented higher political disruption than its first, which itself was three years into recession; Boris Yeltsin won reelection in 1996 despite terrible economic malfeasance. It is over multiple electoral cycles that a long-run period of economic hardship disrupts and discredits old political orders.

Once it is established that economic decline creates political instability, it can then mutate into a dozen malign effects on domestic and international orders. High rates of political volatility are negatively correlated with international cooperation in such areas as respect for trade agreements and declining support for peacekeeping operations. Changes in the institutional structure of a state’s political system, which can emerge in periods of volatile political conditions, correlate with the collapse of alliances. Declining economic growth is associated with increased hostility to immigrants, and an increase in civic violence towards them. In more severe cases, political instability and civic violence are associated with an increase in state repression.

It is difficult to discern which of these problems will manifest in any particular national history, but in the same way that climate change makes many different physical disasters broadly more likely, economic stagnation makes most of these bad things more likely to occur.

If these general linkages hold up, then we might expect to see negative economic trends correlated with one of most unfavorable outcomes of all: the reversion of democracies to autocratic regimes. And indeed, this link is already anchored in the scholarly literature. It is a widely accepted and important tenet among scholars of democratic transitions in low and middle-income democracies, with some authors finding it to be the only strong correlate to authoritarian reversion. This is already a problem for the order, because autocratic nations are more likely to violate international norms, break alliances, and initiate military conflicts.

The newest and most upsetting aspect of this is the creeping growth of regime destabilization out beyond low- and middle-income countries. Prior research and data from the post–1945 global era once reassured us that rich, consolidated democracies have no history of authoritarian reversion. There was even a specific, comforting Per Capita GDP number, a Maginot Line over which democracies don’t fail—roughly $10,000. But Turkey’s recent purges of opposition influences and constitutional changes arguably make it the richest democracy ever (at $10,975 USD per capita) to fall into an authoritarian reversion. Even within the borders of the European Union, the leaders of the ruling Fidesz party in Hungary (per-capita GDP in 2016: $12,664) have instituted drastic changes to the electoral system to favor minority rule. Hungary’s economic history corresponds to our economic decline hypothesis: after averaging GDP growth of 2.7 percent between 1992 and 2006, the country followed a deep 2008 recession with stagnation, averaging 0.7 percent growth over the following decade (per the World Bank’s data). Since Victor Orban’s election in 2010, Hungary has fallen from a rating of “1” on Freedom House’s seven-point scale of political and civil liberties to a “2.5”, the lowest score still qualifying as a “free” country, with the real chance of further decline. Not every recent case of authoritarian reversion follows this economic pattern, but it is a clearly established pattern, and it is no longer clear how much immunity is conferred by a nation’s wealth.

Some indicators used to assess the health of the international order, such as global supply chain integration, cross-border financial flows, and the continued membership of the United Nations, remain fairly stable. The liberal order and globalization are not the same thing, and the latter can deepen even as the former is weakening. The “twin insurgencies” find it useful to move money and goods between countries, and so do ordinary human beings. The economic foundations of the global order, while separately vulnerable to financial disorder, can also coexist with economic stagnation. The unraveling of the elements of global order, in other words, will occur not in all domains at once, but first in civil and political liberties.

Authoritarian reversion has yet to dominate the metrics of world governance, which inevitably pushes formal evaluations of global democracy tread carefully instead labeling the current state of affairs a genuine crisis. But the point where we would clearly demarcate a crisis, such the point where authoritarian reversion visits the world’s consolidated democracies is a point that is far too late to sound the alarm. The sources of and solution to global economic rich-nation stagnation are beyond the scope of this essay. However, the “canaries in the coal mine” for global democracy that Americans see today are an appropriate moment to take powerful measures to preserve the American system of governance.

Jordan Willcox works as a defense analyst at the RAND Corporation, and follows macroeconomics and disorganized behavior research in his spare time, while tweeting at @noosphereintern.