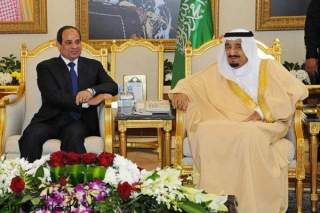 After an initially cautious response to the Iran nuclear deal, Egypt upped the ante against Tehran last week, with both the Foreign Ministry and the Al-Azhar religious seminary condemning the Islamic Republic’s “interference” in Arab affairs. Cairo has been more circumspect than Israel and the Gulf states in condemning the agreement, but its quiet should not be mistaken for acquiescence—like them, it dreads the effect of a cash-flush and potentially nuclear-armed Iran on its interests and security.

Egypt is, with Saudi Arabia and the Gulf monarchies, a pillar of the Sunni Arab bloc opposed to the spread of Iranian influence in the region. Since Cairo’s July 2013 coup against the Islamist president Mohamed Morsi, it has received tens of billions of dollars in Gulf aid—chiefly from the Saudis and United Arab Emirates, both of which share maritime borders with Iran and are directly threatened by its destabilizing regional behavior. With Egypt’s traditionally close ties with Washington at a nadir, Cairo is keen to avoid alienating its foremost regional allies and benefactors.

Egypt’s anxiety over the deal, however, extends beyond the sensitivities of its allies. Since 1979—the year of Iran’s Islamic revolution and Cairo’s peace deal with Israel—bilateral relations have been in a deep freeze. The last Shah of Iran was a close friend of Egyptian President Anwar Sadat, his first wife was Egyptian and when the revolution ousted him from Tehran he spent the last months of his life in Cairo, where he remains buried to this day.

Iran’s new rulers resented Sadat’s hospitality to their former king—when the Egyptian leader was assassinated in 1981, they renamed a Tehran street after the killer. For decades after 1979, Cairo and Tehran had no diplomatic relationship whatsoever. In the words of Sadat’s successor Hosni Mubarak (revealed by the 2010 Wikileaks cable trove), Egyptian leaders viewed their Iranian counterparts as “big fat liars.”

Mubarak’s ouster in 2011 led to a partial thaw in relations, but bad blood remains. For starters, the military-led regime of President Abdel-Fattah al-Sisi deems Iran dangerously sympathetic to the Morsi regime that it ousted. Tehran, after all, saw Morsi and his Muslim Brotherhood movement as a potential ally, sharing its religiosity and anti-Western fervor even despite the Sunni-Shiite divide (Morsi’s short-lived tenure saw the first visit of an Egyptian president to Tehran in decades—one that was quickly reciprocated by Tehran). Today, just 15 percent of Egyptians view Iran as having a positive influence in the world.

Moreover, Sisi’s government tends to view Egypt’s one to two million Shiites as Iranian agents-in-waiting. In April the government launched a campaign to suppress the supposed growth of Shiism in the country, and anti-Shiite and anti-Iranian invective is common in Egyptian media. The televised tirade by one retired general is representative: “Iranians are swindlers, liars, and cheats,” he said, vowing that if threatened by Iranian ships, “We will sink them before they even come near us.”

Cairo has a lot on its plate at the moment: an Islamic State insurgency in the Sinai Peninsula, increasingly violent and disaffected Brotherhood sympathizers on the mainland and an economy experiencing the most fragile of recoveries. In such an environment, it prefers to let the Israelis, the Gulf states and deal skeptics in Washington raise the alarm over the deal’s perils. Still, its deep-seated mistrust of Iranian ambitions means that despite the dire state of its nuclear infrastructure, Egypt could seek to follow suit with a nuclear program of its own.

In the days after the deal, the most-read opinion piece on the Egyptian news portal Ahram Online came from the British-based Egyptian blogger Nervana Mahmoud.The Iran deal, she wrote, would have direct, negative effects on the Egyptian body politic, demonstrating to its illiberal actors—and those region-wide—that intransigence pays off.

“The Muslim Brotherhood and its supporters will continue to lobby in Washington, hoping that its projection of an Iranian–style defiance will convince the Obama Administration to exert pressure on the leadership in Cairo,” she wrote. “Sisi’s supporters will use Iran as a pretext to justify more crackdown on opponents, and argue that world powers, which are willing to lift sanctions against the Iranian regime despite 36 years of ruthless rule, have no moral ground on which to judge Egypt.”

The drafters of the Iran deal portray it as “a historic chance to pursue a safer and more secure world,” and one that could even incentivize Tehran to “behave differently in the region, to be less aggressive, less hostile, more cooperative.” In Cairo, as across the region, few share those hopes.

Oren Kessler is deputy director for research at Foundation for Defense of Democracies, and former Middle East affairs correspondent for The Jerusalem Post