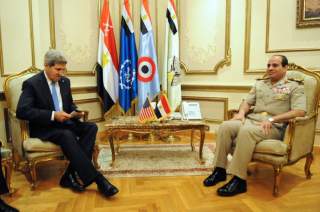 It is more than likely that few of Egypt’s 54 million eligible voters were very concerned about the foreign policy of their presidential pick when they cast their ballots last week. With an ongoing Islamist insurgency, looming summer fuel shortages, and a myriad of other domestic crises, it’s not hard to understand why.

Although foreign policy has been put on the back burner of both the campaigns of Abdel Fattah al-Sisi and Hamdeen Sabahi, Egypt’s next president (presumably Sisi) will have to deal with numerous challenges along the country’s borders and throughout the region. Many of these challenges are as threatening (if not more so) to the country’s stability as the current domestic problems:

Rightfully described by Sisi as a “life and death matter,” Ethiopia’s massive Renaissance Dam project could significantly threaten Egypt’s water supplies when it comes online in 2017—particularly if Addis Ababa decides to reservoir Nile waters in its territory. Ethiopia has since defied Egypt’s objections, insisting that electricity generated from the dams will benefit the entire region, and that Cairo has nothing to fear as long as water runs through the dam rather than being stored behind it. Even though negotiations have remained at a deadlock since January, Egyptian officials have toned down threatening rhetoric over a military option, emphasizing a regionally coordinated agreement.

Egypt receives 90 percent of its water from the Nile and has already qualified as being “water impoverished” under international norms. For this reason alone, a military option should never be discounted if Ethiopia makes any move to significantly divert Nile waters. But the known logistical difficulties of such a long-range operation have diminished any military deterrence against Ethiopia, and Egypt’s conciliatory tone toward Addis Ababa is a testament to this reality. Both candidates are right in promoting a policy of engagement and international coordination on the issue, and the next president can only hope to extract as many concessions in terms of water sharing and electricity supplies as possible from Ethiopia before the dam eventually comes online.

After three long years of being on the receiving end of Libyan weapons smuggling and jihadist infiltration, Egypt may finally have an address in confronting security threats on its western border. Earlier this month, former-Libyan-army-general-turned-anti-Islamist-crusader Khalifa Hiftar commenced a massive campaign against Islamist militias in eastern Libya, an effort which quickly rallied similarly-minded militias and activists nationwide, dividing the country along secular and religious elements. Hiftar is widely rumored to be covertly backed by Egypt and its anti-Islamist backers on the Arabian Peninsula, and his supporters are quick to compare him to Egypt’s Sisi for his hardline policies against political and militant Islamists.

Egypt can ill-afford to involve itself in Libya’s affairs any more than it already has. Doing so risks committing more resources from the country’s already overstretched military, which is still occupied with crushing the Sinai insurgency and preserving the peace in major cities. Backing Hiftar publicly against his internal Libyan opponents will risk further regionalizing the Libyan conflict, further pitting militant Islamists across the region against the Egyptian government. Egypt’s next president needs to sit this one out, and focus on sealing the Libyan border, not crossing it.

Security cooperation between Israel and Egypt has reached its highest point in decades under Sisi’s post-Morsi Defense Ministry. Sisi has been blunt about the responsibility to prevent attacks into Israel from Sinai, while engineering an unprecedented effort to weaken Hamas in the Gaza Strip as part of his overall campaign against the Brotherhood.

But while Israel and Egypt are working harmoniously towards their joint security interests, Egypt’s next president will be expected to champion the Palestinian issue, particularly if another round of violence erupts between Israel and Hamas in Gaza, or in the event of another uprising in the West Bank.

Most critically, Israel may hold the solution to Egypt’s energy crisis. On May 5, operators of Israel’s offshore Tamar natural gas field signed a letter of intent with a Spanish firm to transfer natural gas to its liquefaction refinery in the coastal town of Damietta. Economically, Egypt can only benefit from accepting Israeli natural gas to both be sold in foreign markets and to keep some to replenish its dangerously dwindling supply. But if the deal materializes, Egypt’s next president risks the same political backlash as the Mubarak regime, whose cheap export of natural gas to Israel during the last decade increased perceptions of both moral and financial corruption.

Battered by three years of political upheaval and economic downturn, Egypt has never been more dependent on foreign assistance. Morsi’s ousting last year threw a decades-old alliance with Western democracies into shambles and cut the economic umbilical cord with Qatar and Turkey. Egypt is now flirting with Russia over arms deals with an intensity not seen since the 1970s, and is almost completely dependent on economic aid from Saudi Arabia and the UAE.

While the West, Russia and the Arab world have huge interests in preserving stability in Egypt, the next president will be forced to make compromises and repair the damage done to the country’s reputation since Morsi’s ouster. Sisi, himself a former student of an American military academy, knows that even Russia cannot fill Washington’s shoes when it comes to superpower backing. As demonstrated by the recent delaying of the delivery of a squadron of repaired Apache helicopters, the next president needs to get back on Congress’s good side. Doing so means visibly easing restrictions on civil liberties; demonstrating a commitment to fighting jihadi terrorism just isn’t enough.

Syria will continue to be the elephant in the room for any of Egypt’s foreign-policy dealings. And it would serve the next president well to simply steer clear of the issue, even if sympathy for the Syrian Sunni population is still high among many Egyptians. Increasing support for moderate rebels would draw Russia’s ire, while backing up the Assad regime on joint counterjihadist issues could cost Egypt the support of Saudi Arabia, the Syrian opposition’s main backers.

For a country prided by its patriots as “um al-dunya” (mother of the world in Arabic), Egypt's next president will be forced to take a more pragmatic attitude towards his foreign policy. An overly aggressive approach to any of the regional crises listed above risks being interpreted by today’s Egyptians as an attempt to divert attention from domestic shortcomings. So was the case with President Morsi regarding support for the Palestinians and Syria. Most importantly, opportunities to revive economic and security alliances shouldn’t be missed, even if it means taking domestic political risks—something previous leaders always cowered away from. Undoubtedly, this is easier said than done.

Daniel Nisman serves as president of the Levantine Group, a geopolitical risk and research consultancy based in the Middle East.