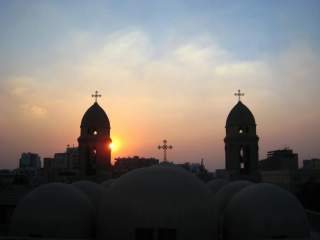 President Abdel Fattah al-Sisi of Egypt presents himself as an Islamic reformer. He has challenged the sheikhs of Al-Azhar University—Sunni Islam’s preeminent religious institution—to promote moderation, and took the bold step (by Egyptian standards) of wishing worshippers a merry Christmas in Cairo’s Coptic cathedral. The moves are commendable, but do little to alter an unfortunate reality: while Egypt’s penal code prohibits “insulting heavenly religions or those following it,” the law is enforced for just one faith: Sunni Islam.

Egypt takes religion seriously. By law, Egyptians are only allowed to practice one of the three recognized monotheistic religions: Islam (implicitly Sunni Islam—the faith of the overwhelming majority), Christianity (representing some ten percent of the population) and Judaism (today, Egypt has exactly seven Jews, down from 75,000 in 1947). Still, Egyptians may only practice the creed they’re born into—the government does not recognize Muslim conversions to Christianity, and conversion from either faith to Judaism is nonexistent—unless the target faith is Islam.

The latest annual report from the U.S. Commission on International Religious Freedom, issued earlier this month, found that while the majority of Egypt’s blasphemy charges were levied against members of the Sunni majority, the bulk of prison sentences were doled out to Christians, followed by Shiite Muslims and atheists.

In June 2014, shortly after Sisi’s election, a court in Luxor sentenced four Christians to up to six years in prison for posting photos to Facebook deemed insulting to Islam. The same month, a journalist (a Muslim who had begun practicing Christianity in an unrecognized conversion) was given five years in jail for supposedly offending Islam by reporting on anti-Christian violence in Upper Egypt (some of the charges were later dropped, but he remains imprisoned). The punishments for these alleged verbal slights against Islam come as mob attacks against Coptic churches regularly go unpunished.

Meanwhile, slander of the Jewish faith and its adherents is a fixture of contemporary Egyptian life. Anecdotal and statistical evidence puts Egypt in the running for the world’s most anti-Semitic nation: with 98 percent of the public expressing unfavorable opinions of Jews, it exceeds even the accomplished records of its Arab neighbors.

The story of Egyptian Judeophobia is a long one, but today, Mein Kampf and the Protocols of the Elders of Zion are mainstays of Cairo book kiosks, and foreign journalists are beaten and sexually assaulted on imaginary charges of being Jewish. Mainstream, otherwise liberal actors appear in grotesque Judeophobic entertainment, and Sisi’s election nearly a year ago has done nothing to slow the flow of anti-Jewish calumnies on public and private television (which can be seen here, here and here).

Jews and Christians, however, at least enjoy the nominal right to live according to their beliefs. Woe to anyone who follows neither of the three state-approved faiths: atheism remains grounds for ostracism, and members of Egypt’s Shia community are treated like lepers. Late last year, the Religious Endowments Ministry launched a campaign to warn imams of the “growing threat” of the Baha’i creed, lest citizens fall prey to “deviant thoughts that destroy the minds of young people.” Baha'is—at most a few thousands out of the country’s 82 million people—“threaten Islam specifically and Egyptian society in general,” the ministry said, which last month expanded the campaign to counter atheism and Shia Islam.

Egypt is, by any measure, a conservative country. A comprehensive Pew poll conducted in 2013 found three-quarters of the country’s Muslims want to live under sharia, while an earlier survey found eight in ten endorse stoning adulterers and maiming thieves. Nearly nine in ten favor the death penalty for apostasy from Islam.

Views among Christians, while less austere, are also less than liberal. Marriage is only through the Church, while divorce requires permission from the Coptic Pope and is exceedingly rare. Even when granted, divorced parties are almost always prevented from remarrying.

Egypt’s Sunni Muslims need not worry—the country’s demographics ensure their faith will forever exert a stronger cultural pull than any other. Still, it’s bad enough that Egypt gives its citizens three religions to choose from. A government claiming to uphold religious diversity must do more to protect those choosing the unpopular creed or none at all.

One of best gauges of a country’s freedom is the security the majority affords minorities. For Sisi’s Egypt to credibly claim the mantle of religious pluralism, it must extend that protection equally.

Oren Kessler is a Research Fellow and Deputy Director for Research at Foundation for Defense of Democracies, a think tank in Washington.