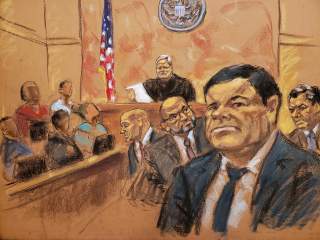 A trial jury in New York has convicted Joaquin “El Chapo” Guzman, the former kingpin of Mexico’s Sinaloa drug cartel, of multiple felonies. That outcome was even less surprising than Tom Brady playing in another Super Bowl earlier this month. Nevertheless, U.S. officials declared the convictions a victory for the people of the United States and Mexico. “There are those who say the war on drugs is not worth fighting,” said Richard Donoghue, U.S. attorney for the Eastern District of New York. “Those people are wrong.”

Guzman’s fate was sealed when Mexican authorities extradited him to the United States. El Chapo had engineered escapes from prisons in Mexico, but his chances of replicating that feat in America were virtually nonexistent. In reality, Guzman had increasingly become an irrelevant factor in Mexico’s drug trade since his capture in January 2016.

The aftermath, though, has been the opposite of what drug warriors in both the United States and Mexico wanted. Instead of declining with the elimination of Guzman’s power and the weakening of the Sinaloa organization, drug-related violence has soared. More than thirty-three thousand Mexicans perished in the fighting during 2018. That total broke the previous record of slightly over twenty-five thousand kill, which was set the previous year. The yearly carnage now exceeds the levels experienced during the bloody period 2006–2012, when President Felipe Calderon pursued a full-fledged war using the military against the cartels. An estimated one hundred thousand victims died during that conflict, with thousands of others still missing and unaccounted for. Replicating, much less surpassing, the pace of that slaughter after El Chapo’s capture is not the mark of a successful strategy.

Removing Guzman as a factor in the drug trade produced a variety of negative effects. The Sinaloa cartel had acquired a dominant position in the drug trade; by some estimates, it controlled approximately half of the trade. That development reduced the number and severity of turf fights, as Sinaloa’s weakened rivals retreated. The change was visible in such places as Ciudad Juarez, which had been the scene of some of the worst fighting during the Calderon years. By 2012, though, Sinaloa was in reasonably secure control, and the number of killings declined. Similar effects occurred in other regions.

El Chapo’s capture and extradition reversed that process. The Sinaloa cartel fractured into competing factions, and the fighting for control of the organization became ferocious. In addition, the cartel’s previously weakened rivals rebounded and moved in on territory once under secure Sinaloa control. There were also powerful new entries in the field, most notably the Jalisco New Generation cartel. Some of the challengers were even more violent and vicious than Sinaloa had been.

The rise in turf battles and casualties is a damning indictment of Washington’s longtime strategy of focusing on eliminating drug kingpins—the decapitation strategy. Through the Merida Initiative, adopted by the two countries in 2007, the United States funds Mexico’s heavily militarized anti-drug strategy. Last year, the Trump administration allocated another $139 million through that program, and the Defense Department provided another $66 million directly to Mexico’s military.

Yet Guzman is hardly the first cartel leader killed or captured as a result of the decapitation campaign. In fact, several prominent leaders of the Gulf cartel and Los Zetas have been taken out over the years. And both organizations were weakened. But the flow of illegal drugs into the United States continues unabated, and other cartels simply have filled the void created by the removal of incumbent kingpins.

El Chapo’s conviction is just the latest milestone in a failed strategy. There are some indications that Mexico’s new president, Andres Manuel Lopez Obrador, may recognize that reality. During a speech following his election, he criticized the existing strategy as a failure and pledged to adopt a different approach. So far, however, there are few tangible signs of change. The military is still deployed in anti-drug operations, and fighting is taking place at an undiminished level.

U.S. and Mexican officials need to acknowledge that prohibition policies do not work, regardless of whether they are directed against alcohol or currently illegal drugs. When a product is highly desired, suppliers will vie to fulfill the demand. And crackdowns by law enforcement have little impact on demand levels. Government policies can—and do—largely determine whether legitimate businesses or violent criminal organizations will dominate the trade. Unfortunately, prohibition makes it certain that the latter will do so.

The legalization of marijuana in an increasing number of American states has done more to injure the Mexican cartels than any of the anti-drug measures taken by Mexico and the United States. That source of revenue has declined significantly. But prohibition has empowered the violent cartels to a great extent, and they are now branching into other arenas, such as hijacking fuel shipments.

U.S. and Mexican officials can celebrate the final defeat of El Chapo all they wish, and they will certainly do so. But his conviction is just another empty victory in the war on drugs.

Ted Galen Carpenter, a senior fellow in security studies at the Cato Institute and a contributing editor at the National Interest is the author of twelve books on international affairs, including Bad Neighbor Policy: Washington’s Futile War on Drugs in Latin America and The Fire Next Door: Mexico’s Drug Violence and the Danger to America.