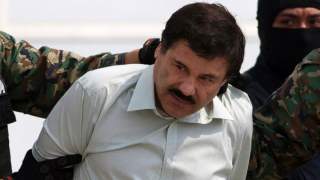 “That risk does not exist” brazenly stated Jesus Murillo Karam, Mexico’s former Attorney General, when quizzed on the possibility of El Chapo Guzman escaping once again from the maximum-security prison where he was incarcerated. At the time of his second arrest in February 2014, Guzman’s 2001 spectacular jailbreak in a laundry cart naturally had everyone asking: “Will he do it again?”

Only 16 months after being apprehended for the second time, the most visible leader of the Sinaloa cartel, Joaquin “El Chapo” Guzman Loera, found his way back to freedom. His finely designed escape has been labeled an “egg to the face,” and “the biggest embarrassment” for Mexican authorities, and, particularly, for Enrique Peña Nieto’s presidency. Guzman’s 2014 arrest was largely portrayed as “crowning” Peña Nieto’s anti-organized crime efforts, with the president himself stating at the time that another El Chapo prison break “would be more than regrettable; it would be unforgivable.”

Alas, on the evening of July 11, 2015, the Sinaloan drug lord discretely stepped out of his prison cell putting the finishing touches on an elaborate, months-long escape plan. Nothing less than a more powerful encore with a more sophisticated mise-en-scène than the first, the second jailbreak “represents without a doubt an affront to the Mexican state.” An affront, however, that may prove a boon for Mexico, if not for Peña Nieto’s Presidency.

Since this past Saturday’s escape, many in Mexico and around the world have labeled the jailbreak a sign of the administration’s sheer incompetence, and incontestable proof of the entrenched collusion between the Mexican government and the narco-traffickers. While El Chapo’s escape does not shed the most favorable of lights on the current administration, those who have sounded the death knell of Peña Nieto’s security policies and predicted a return of the drug violence may have spoken (and cheered!) a bit too soon. To everyone’s surprise, Guzman’s jailbreak may represent a turning point that benefits Mexico, a country torn by narco-violence for over nine years now.

Since Enrique Peña Nieto assumed the Mexican Presidency in December 2012, the country’s economy has been sluggish, growing at a very slow pace. Furthermore, the security measures of the new administration, focusing on the root causes of drug related violence as opposed to dismantling the cartels, have been slow in yielding results.

Given this rather lackluster performance in two of the most important areas for ordinary Mexicans—the economy and public security—El Chapo’s prison escape should represent more than a mere a wake up call for the government in Los Pinos. By translating this unfortunate episode into significant changes in the way the current administration carries out its rule of law and security policies, including the cooperation with the United States to extradite the narco-traffickers indicted across the northern border, the Mexican government can snatch victory from the jaws of defeat.

From a domestic security policy perspective, the Peña Nieto administration has been de facto in a bind during the first half of its six-year mandate, being blamed for not having implanted a coherent security strategy. On the one hand, it tried to distance itself from the kingpin strategy implemented by his predecessor, Felipe Calderon. On the other, Peña Nieto had to stave off accusations of continuing in practice with the previous administration’s cartel leadership decapitation policies, while the measures he initiated that focused on lowering the levels of violence, were judged too slow and ineffective. El Chapo’s escape creates for Peña Nieto more room for maneuver to shift gears, and makes it easier for him to justify considerable changes in security strategy. In the second half of his mandate, Peña should be able to speak firmly in his own voice on security matters, and to adopt more decisive and explicit measures to lower drug violence throughout Mexico.

Furthermore, as El Chapo’s escape translated into huge public disappointment with the government, Enrique Peña Nieto should take the opportunity offered by this incident to engage in systematic and fair efforts to “clean-house,” and implement anti-corruption measures. At present, the eyes of the Mexican public are fixated on the next move from Los Pinos, making the transparent and fair implementation of anti-corruption measures the Mexican government’s closest ally. By avoiding abuses of power and by ensuring that the “house-cleaning” efforts do not become purges, the Peña Nieto administration can genuinely further its goal of strengthening the rule of law. Conversely, any abuses undertaken throughout this process, including the sheltering of guilty officials, will only damage the reform process together with the administration’s image, and would further embitter the Mexican public.

It is true that the first step the current administration could undertake to regain the public’s trust and dissipate the accusations of incompetence and corruption is to find Guzman in the shortest time possible, and throw him back behind bars. Even better, it can extradite him to the United States to mend fences with its neighbor in El Norte, and reestablish Mexico’s credibility as a reliable partner in disrupting the drug trade. While such a turn of events would be highly desirable for both Mexico and the United States, in more realistic terms both countries’ governments are likely years away from recapturing El Chapo. The elaborate escape plan, the high quality of the construction materials and of the engineering work involved in building the tunnel represent more than a statement of defiance of the Mexican authorities. The speed of the construction, the significant financial resources committed to the project, and the almost flawless final product, convey a more powerful message: Guzman intents to remain free for a long time, and he is very serious about making it happen.

Besides strengthening the rule of law, and carrying through the reform of the police and judicial system, the Peña Nieto administration is in a good position to exploit El Chapo’s desire to stay free, and indirectly manipulate the balance of forces among the drug cartels to reduce the levels of violence. A forceful, indiscriminate Calderon-style crackdown against the narco-traffickers is likely to backfire, and further increase drug violence. Maintaining the status quo and continuing with the same set of security measures is not likely to generate timely results and appease the Mexican public. This leaves the Peña Nieto administration with a middle-of-the-road approach. By recognizing that El Chapo has a direct interest in keeping a low profile and in avoiding the escalation of the violence on the ground in an attempt to appease the Mexican authorities, the latter should put to work to their advantage his desire to stay free and not ruffle more government feathers.

While many Mexico experts predict that violence is likely to spike as a result of Guzman’s escape, such an outcome is not rational from Guzman’s perspective and given his modus operandi. Until the present, he has proven to be an extremely intelligent and sleek operator who has a deep understanding of the strategic and tactical environment in which he and his organization operate. By challenging the other cartels and escalating the violence, Guzman and his organization would only attract more ire and repression from the already vexed Mexican authorities who are under immense pressure to show immediate results.

Assuming that Guzman aims to maintain his leadership role in the underworld and that he has not staged his escape as a final grand act before retiring from the drug business, then his best bet is to engage the with remaining major cartels to rein in the violence among traffickers. In this light, the Peña Nieto administration needs to astutely calibrate and target its response in terms of arrests, asset seizures and drug loads intercepts, so as to shift the balance of power among the drug cartels in a direction that lowers rather than escalates the violence among them. As unpalatable as such an approach is, under the circumstances it may represent the least violent approach that a country still in the process of healing the wounds of massive narco-violence needs.

Last but not least, Mexico may benefit from Guzman’s escape if in the near future the country rebuilds cooperation ties with the United States, with the two neighbors relearning to trust each other and to appreciate the benefits of reciprocal assistance. By extraditing indicted drug lords to the United States, Mexico is not yielding its sovereignty. On the contrary, it gains necessary breathing space to focus its attention and resources on strengthening institutional capacity.

Irrespective of whether Guzman has escaped his prison cell into retirement or to reassume the helm of the Sinaloa cartel, his flight represents a turning point for the Peña Nieto administration to craft a genuine security strategy, strengthen the rule of law inside the country and further cooperation with the United States. If Peña plays his hand right, El Chapo’s escape may prove to be the kick in the pants that helped turn Mexico around.

Irina A. Chindea is a PhD Candidate at the Fletcher School, Tufts University, and an International Security Program research fellow with the Belfer Center for Science and International Affairs at Harvard Kennedy School.