Embrace the Moon Miracle: Why Trump Should Let the Koreas Build Peace 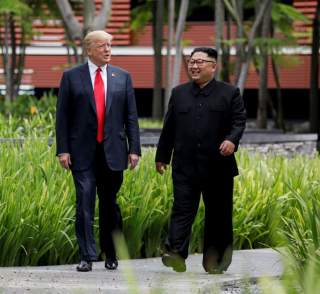 There is no beating around the bush: nuclear talks between the United States and North Korea are not going particularly well. Stephen Biegun, the Trump administration’s special envoy to North Korea, has yet to meet with his North Korean counterpart. All of the happy talk about Donald Trump striking a kinship with Kim Jong-un has been laughable at times; if the budding romance between the two was meant to butter Kim up to the point where he hands over his nuclear weapons, the strategy has clearly failed.

Inter-Korean negotiations, however, are another story. South Korean President Moon Jae-in has met with the North Korean dictator three times, with a fourth session that could be scheduled as soon as the end of the year. Such a high-level summit would have been unthinkable during the reign of his predecessor, who iced a sunshine policy South Korea’s conservatives believed was foolish from the start. South and North Korean officials are talking like partners who want to improve the relationship rather than bickering like mortal enemies. The “Moon Miracle” is more than a motto—it has dramatically shifted North-South relations in less than a year.

North Korea hawks in Washington aren’t especially thrilled about Moon’s desire for reconciliation on the Korean Peninsula. One can assume National Security Adviser John Bolton, who penned an op-ed flirting with a preventative military strike on North Korea weeks before he was appointed, is not happy about it either. Yet the South Korean government is proceeding with the dialogue regardless, even if they are aware that going too far, too fast would earn a stern rebuke from the White House and very likely violate U.N. Security Council sanctions.

Washington and Seoul both agree that the Kim regime must denuclearize. But the countries have sincere disagreements about the best way to bring denuclearization about. Trump, like his predecessors, wants Pyongyang to give up the nukes before any sanctions are lifted. Moon’s government believes peace and economic development in the North are prerequisites for denuclearization.

How do we know Trump has the wrong approach? Because outside of a missile and nuclear test moratorium (one that could quickly be reversed by Kim’s order), a few American prisoners being released, and a summit in Singapore that generated extensive airtime and a shiny press statement, nothing of substance on Kim’s nuclear weapons has occurred. Pyongyang’s nuclear program is still humming along, and none of us should have anticipated anything different. Kim has yet to sign a full agreement to change that; news that bomb fuel and missiles continue to be produced in facilities scattered throughout North Korea is, in fact, old news.

The White House continues to demand a full and honest declaration from Pyongyang of its nuclear assets before any sanctions relief or diplomatic concessions are granted. Yet as Siegfried Hecker has observed, to provide a to the Americans would be for Kim Jong-un to expose himself to a high risk for no gain. “A complete account of North Korea’s nuclear weapons, materials, and facilities would, in Kim’s view, likely be far too risky,” Hecker wrote. “[I]t would essentially provide a targeting list for U.S. military planners and seal the inevitable end of the nuclear program and possibly his regime.”

Trump is stuck. If he isn’t willing to change his strategy, negotiations will remain bogged down until he loses his patience and walks away.

There is no trust at all between America and North Korea. However, there is at least some goodwill between the Koreans themselves. Both Koreas have embraced the kinds of confidence-building measures that can build a rapport between them. These include decreasing tension along the demilitarized zone (DMZ) and transforming the Korean Peninsula into a more predictable place. Guard posts along the border have been blown up. Joint railroad surveys are being conducted. Meetings are being regularized. A no-fly zone has been declared over the DMZ. Furthermore, talks are commencing about drawing final borders in waters that have been contested by both. None of this may involve nuclear weapons, but none of it should be dismissed as window dressing either.

The time has come for Donald Trump to follow Moon Jae-in’s lead. Assuming North Korea’s denuclearization is even plausible, it most certainly won’t occur by 2021. The process will be long, frustrating, and tediously technical—and it could very well last over a decade.

What the United States can do right now, however, is support Seoul’s peace initiative with the North. This will require tough choices by Washington, such as allowing certain cross-border projects to proceed and permitting the South Koreans to engage in some modest economic activity without having sanctions wielded over their heads.

Many hawks won’t like it, most of whom have advocated for the same unconditional hardline status-quo which has failed over the last quarter-century.

If Trump wants to be the unconventional dealmaker he always claims to be, it’s time for him to focus on helping the two Koreas solidify peace now instead of obstructing it in favor of an immediate denuclearization that will never come. The president doesn’t have much time to waste; Trump reportedly hopes to embark on his second summit meeting with Kim early next year, so any change in strategy will need to be out in place well before that session occurs. To continue the current strategy is to continue failure, returning the world to the bad old days of 2016 and 2017 when U.S. and North Korean officials were trading insults.