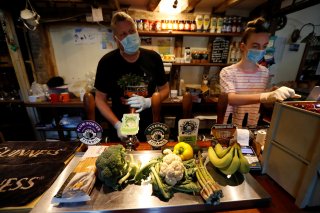 As America prepares to get back to work, will some people be left behind? The Small Business Administration (SBA) has adopted rules for emergency coronavirus loans that exclude otherwise eligible existing small businesses from relief solely because they are owned in part by individuals who have a criminal record. Given that at least nineteen million Americans have a felony record, this overly broad exclusion threatens to unfairly deny a lifeline to deserving small businesses and their employees.

The Paycheck Protection Program (PPP) that was part of the $2 trillion relief legislation passed by Congress and signed by President Donald Trump provides loans to small businesses that are forgivable if the business retains its employees during the period of at least eight weeks. While the legislation was vague on exclusions based on criminal background, the guidance adopted by the SBA on April 2 is overly broad, going far beyond excluding only those who have committed  offenses related to financial dishonesty such as bank fraud or extremely serious offenses such as rape and murder.

Among those excluded are small businesses that belong, at least in part, to someone who owns 20 percent or more of the business and is currently facing charges for any offense, is currently on community supervision, or has been convicted of a felony in the last five years. For several reasons, this disqualifying language casts a much wider net than necessary.

First, simply because an individual is facing charges does not mean they are guilty. Indeed, some 20 percent of those arrested ultimately have their case dismissed or are acquitted.

Additionally, the current criteria exclude existing small businesses that are owned, in part, by the 4.5 million Americans on community supervision, which encompasses probation and parole. Yet initiatives like the Prison Entrepreneurship Program (PEP) have helped many Americans with a record become successful business owners.

Consider Cedric Hornbuckle, who through PEP went from being behind bars to being the owner of a moving business called “Moved by Love.” Such established small businesses should have the same access to loans during this crisis as others.

While the accomplishments of those who have been to prison and started a successful business while still on parole are particularly striking, the exclusion also affects the larger group of 3.5 million Americans on probation. Most people on probation have never been to prison and were placed on probation because a prosecutor and judge deemed them a good bet to succeed in the community. Furthermore, being employed is typically a condition of probation and, given the reluctance of many employers to hire those with a criminal record, the impetus to start a small business is both obvious and commendable.

Finally, the regulations cast far too wide a net when it comes to the types of prior convictions covered. By including all felonies going back five years, this exclusion rules out even those with nonviolent drug convictions. In fact, in some states, repeat possession offenses involving small amounts of marijuana can still be enhanced to a felony.

In contrast, on occupational licensing, dozens of states have moved in a different direction. Instead of blanket exclusions of all felonies, recent state laws, as well as model policy adopted by the American Legislative Exchange Council, have focused narrowly on those offenses directly related to the duties of the occupation. In this context, it makes sense to exclude those who have committed certain fraudulent business offenses, such as embezzling funds from a previous loan or lying on a loan application.

Additionally, recently adopted state licensing reforms allow for individualized review, including appeal through an administrative process. No such avenue for relief is available from the sweeping SBA exclusions.

Unfortunately, the SBA regulations reflect a fundamental misunderstanding of the limited legitimate role of collateral consequences. They must not be additional punishment, which is exclusively dispensed by the judge or jury, and must be narrowly tailored to protect the public. During this trying time, the SBA must reexamine these regulations to ensure that those small businesses that made the most of a second chance don’t have it taken away through no fault of their own.