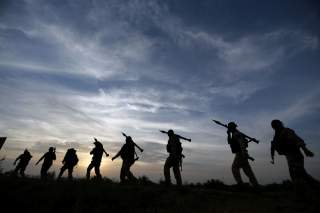 A tectonic shift is taking place in Middle East politics. We may be on the verge of seeing a historic normalization of relations between Israel and several major Arab states. And it is all thanks to Iran.

On March 13, representatives from Saudi Arabia, Qatar, Bahrain, Oman and the United Arab Emirates, among other countries, gathered at the White House for a one-day meeting on the growing humanitarian crisis in Gaza. The conference was convened by Trump administration senior adviser on Middle East peace Jared Kushner. And what was most noteworthy was that an Israeli delegation also attended, marking the first ever publicly acknowledged diplomatic meeting involving these countries and the Jewish state.

The signs of change keep coming. Last month, an Air India flight from New Delhi flew through Saudi and Omani airspace en route to Israel’s Ben-Gurion Airport. This was the first direct scheduled passenger flight that had been allowed to take that route, since the Kingdom and Sultanate previously would not admit that there was any such destination. The new route cuts two hours off the flight, and is so disruptive that Israel’s national airline El Al is suing the government for an injunction until they too can use the shorter and less expensive route. Meanwhile, in a more pointed message, jets from Israel and the United Arab Emirates flew side by side in the Iniochos 2018 joint military exercise in Greece. And last Tuesday, Saudi Arabia’s Crown Prince Mohammed bin Salman, better known as MbS, met in New York City with representatives of major American-Jewish organizations, including AIPAC, the Conference of Presidents, the Jewish Federations of North America, ADL, AJC and B’nai B’rith.

The strategic convergence of Israeli and Arab interests is not a new phenomenon. The countries have been pushed together by Iran’s growing and threatening regional presence, as well as the collapse of energy prices since 2014. What is new is the open acknowledgement of the burgeoning relationship, and its translation into broader policies.

Saudi foreign minister Adel al-Jubeir, who was in Washington last week with the crown prince, cautioned against expecting too much too soon. He said that the kingdom maintains its policy of withholding diplomatic recognition of Israel until a peace deal has been concluded with the Palestinians. He also called the Trump administration’s decision to move the U.S. Embassy from Tel Aviv to Jerusalem a “setback.”

But the U.S. embassy move simply recognizes the current regional state of play. The old diplomatic framework is broken, and a new paradigm is rapidly emerging. The Palestinian issue is no longer the marquee concern it once was. Iranian expansionism, nuclear and missile proliferation, and radical extremism, are the critical issues pushing Israel and the Arab states together. Palestinian leaders have shown no great willingness to adapt to the new circumstances. And to the extent the Hamas faction draws closer to Iran, it puts itself on the wrong side of the peace equation. The fact that both Israel and Saudi Arabia are actively defending their territory from Iranian-supplied rockets sums it all up.

Much credit goes to MbS for moving toward a more public affirmation of the new regional dynamic. It is part of the crown prince’s vision for a more progressive kingdom, with an increasingly western orientation, a more liberal view of women’s rights (such as doing away with the requirement to wear the black, full-body covering abaya) and zero tolerance for teaching or preaching Islamic radicalism. MbS is looking to move Saudi Arabia to a new level of development, and that future will include Israel.

The stakes are important for the United States. The Obama administration’s attempted outreach to Iran was more alienating to Sunni-Arab countries than President Trump’s Jerusalem embassy move. The fatally flawed 2015 nuclear agreement not only emboldened Tehran to expand its regional insurgent network, but it also pushed Arab countries to plan for their own nuclear weapons programs as a means of self-defense. So what was sold as a means of creating nuclear-free stability resulted in increased instability and the potential for regional nuclear proliferation.

In the new model, the United States and Israel provide credible nuclear deterrence while also pushing back on Iran’s military adventurism. The Arab states can focus on building new economic and social models for development while combating extremism at home and facing Iranian-backed insurgencies abroad. The Palestinian issue will persist, but only as a sideshow, until President Abbas or his successor makes substantial moves toward a peace deal. And it may not be long before we see a Saudi embassy in Jerusalem as well.