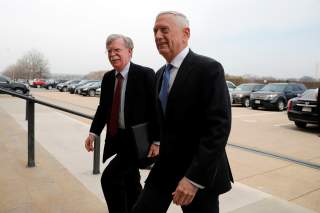 By all rights Mattis, one of the most powerful members of the Cabinet if not the preeminent excepting the president, is trying to accommodate the new head of the National Security Council (NSC).

“I hope that there's some different world views. That's the normal thing you want unless you want groupthink,” Mattis said upon Bolton’s ascension.

But it’s no secret the secretary doesn’t care for Bolton, a White House official told me this week.

And as I’ve reported, Mattis tried to block Bolton at NSC and succeeded for quite some time.

Now there’s a potential fresh fight, according to a source familiar with the matter: Bolton wants Mira Ricardel as a deputy.

This is important because Mattis nuked the idea of Ricardel at the Pentagon on a permanent basis last year, quashing her hopes to be appointed under secretary of defense for policy (USDP), and prompting the president to send her to the department of commerce, where she currently works (as under secretary for export administration).

But back in 2017, Ricardel and Mattis disagreed on appointees at the department of defense—earlier in the administration she was at the Office of Presidential Personnel.

Is Bolton prepared to thumb his nose at Mattis on this one?

The two also disagreed most recently on Syria, as I’ve reported.

Bolton wanted a fuller-fledged strike on Assad while Mattis was more cautious and favored, at most, what took place Saturday morning.

The Wall Street Journal has reported Bolton favored a “ruinous” offensive against the regime in Damascus. (But a defense source familiar with the matter denies recent New York Times reporting that Mattis wanted Congressional approval for any action against Assad; the administration likewise denies it.)

Is the Bolton-Mattis fracas another distraction for the Trump administration or is it about to spill over onto center-stage?

Mattis is omnipresent on national security: the status quo is nothing much moves without Mattis—the deputy president. Syria is telling: Mattis won.