End the Afghan War—Don’t Prolong It 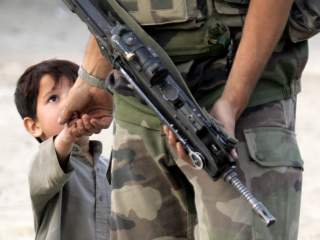 Senators Rand Paul and Tom Udall have recently introduced legislation that would effectively end the war in Afghanistan within twelve months. Whether this effort gets any traction remains to be seen, but the substance and intent of the bill is sound: For the security and benefit of the country, it is time to end the war and redeploy American troops back to their home bases.

Movement from Congress on this issue could be especially important given the still uncertain outcome of peace negotiations between the United States and the Taliban, led by U.S. envoy Zalmay Khalilzad, which some have suggested may succeed in ending the war. That success would be welcome, but the unfortunate reality is that this effort could end up extending the conflict—if it comes to anything at all. But no matter what, ending the war should not be conditioned on the outcome of these negotiations.

Per a recent New York Times report, U.S. troops would withdraw from Afghanistan “over the next three to five years under a new Pentagon plan.” This schedule is intended to “help” Khalilzad’s talks, the New York Times story says, but in practice it would prolong what is already America’s longest war. That should be a complete nonstarter.

It is also at odds with President Donald Trump’s own instincts to describe the Afghan war “a disaster” and unwinnable. If Trump allows his negotiators to extend this conflict beyond his first term, the most likely outcome three to five years from now is more of the same. We’ll have spent an additional hundreds of billions dollars, lost even more troops for no gain—and still find some reason to delay withdrawal yet again.

Meanwhile, however much the Pentagon may wish to postpone withdrawal, the Taliban has a very different time frame in mind. Earlier this week, Afghan media outlet Tolo News stated the “Taliban is pressing the U.S. to withdraw within six months from Afghanistan.” Moreover, the Taliban has still not agreed to even talk with the Afghan government and may refuse to do so until after U.S. troops have withdrawn—and then only if they come to an agreement with Khalilzad.

More to the point, there is little reason to believe the Taliban will make major concessions in these negotiations, because they are in an unequivocal position of strength vis-à-vis the Afghan military and government. According to the most recent U.S. Special Inspector General for Afghan Reconstruction (SIGAR) Quarterly Report, Kabul continues to lose control of its territory to the Taliban. “Afghan government control or influence over districts,” the SIGAR report said, “declined by nearly two percentage points since July to 53.8%.”

Likewise, the United Nations revealed last month that in 2018, more “civilians were killed in the Afghan conflict last year than at any time since records have been kept.” And adding to his country’s woes, Afghan President Ashraf Ghani admitted that since 2014, over 45,000 Afghan service personnel have been killed, for an average of 849 per month, a level of casualties that may not be sustainable over time. In short, every key metric one cares to examine reveals conclusively that the war in Afghanistan has been a failure.

That failure has been evident, however, for many years. In 2012, after my second combat deployment to Afghanistan, I wrote a frank analysis of the war and concluded even then that “the military surge failed to reduce the insurgency, and with the drawdown in swing, our future efforts are virtually certain to likewise fail.” I noted that without a change in our strategy the likelihood of the United States Armed Forces suffering an eventual defeat in Afghanistan remained very high. Seven years later, that sad projection has been proven accurate.

The current efforts at finding peace in Afghanistan do not provide a rational, quantifiable path to ending the war. In fact, in practical terms, all these efforts do is facilitate the continuation of the war. What is needed right now is bold leadership by President Trump to take the firm, necessary steps of ordering a withdrawal for the benefit of the United States.

No American soldier should ever be asked to sacrifice his or her life merely to delay the inevitable; their lives are far too valuable to be so cheaply thrown away. Yes, ending the war in the near term would increase the chance that the Taliban get a better post–conflict deal—and might result in a new phase of the Afghan civil war that was ongoing when we justifiably intervened in October 2001. But the apparent alternative—remaining forever—will not end the fighting. Keeping U.S. forces in Afghanistan will continue the blood-letting of American troops, will harm our security by eroding readiness, and will prevent a shift in focus to deterring great power conflict.

Daniel L. Davis is a senior fellow for Defense Priorities and a former lieutenant colonel in the U.S. Army who retired in 2015 after 21 years, including four combat deployments. Follow him on Twitter at @DanielLDavis1.