The End of Great Power Peace 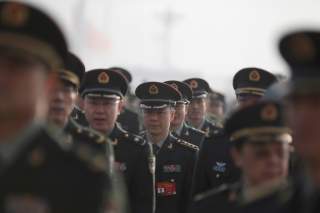 As recently as 2010, Barack Obama could observe a strategic landscape where the “major powers are at peace.” Yet if great-power war has not returned, the era of deep great-power peace is over. Relations between the world’s strongest states are increasingly defined by undisguised rivalry and even conflict; there is ever-sharper jostling for power and ever-greater contestation of global norms and principles. From East Asia to the Middle East to Eastern Europe, authoritarian actors are testing the vulnerable peripheries of American power and seeking to restore their own privileged spheres of regional dominance. In doing so, they are putting the system under pressure on all key geographical fronts at once.

China is leading the way. Although Beijing has been a leading beneficiary of a liberal economic order that has allowed it to amass great prosperity, Chinese leaders nonetheless always regarded American primacy as something to be endured for a time rather than suffered forever. America’s preeminent position in the Asia-Pacific represents an affront to the pride and sense of historical destiny of a country that still considers itself “the Middle Kingdom.” And as Aaron Friedberg notes, China’s authoritarian leaders have long seen a dominant, democratic America as “the most serious external threat” to their domestic authority and geopolitical security. As China’s power has increased, Beijing has strived to establish mastery in the Asia- Pacific. A Chinese admiral articulated this ambition in 2007, telling an American counterpart that the two powers should split the Pacific with Hawaii as the dividing line. Yang Jiechi, China’s foreign minister, made the same point in 2010. In a modern-day echo of the Melian Dialogue’s “the strong do what they can, the weak suffer what they must,” he lectured the nations of Southeast Asia that “China is a big country and other countries are small countries, and that’s just a fact.”

Policy has followed rhetoric. To undercut America’s position, Beijing has harassed American ships and planes operating in international waters and airspace; People’s Republic of China (PRC) media organs warn U.S. allies that they may be caught in the crossfire of a Sino- American war unless they distance themselves from Washington. China has simultaneously attacked the credibility of U.S. alliance guarantees by using strategies—island-building in the South China Sea, for instance—that are designed to shift the regional status quo in ways even the U.S. Navy finds difficult to counter. Through a mixture of economic aid and diplomatic pressure, Beijing has also divided international bodies, such as the Association of Southeast Asian Nations (ASEAN), through which Washington has sought to rally opposition to Chinese assertiveness. All the while, China has been steadily building formidable military tools designed to keep the United States out of the region and thereby give Beijing a free hand. As America’s sun sets in the Asia-Pacific, Chinese leaders calculate, the shadow China casts will only grow longer.

The counterparts to these activities are initiatives meant to bring the neighbors into line. China has islands as staging points to project military power. Military and paramilitary forces have harassed, confronted, and violated the sovereignty of countries from Vietnam to the Philippines to India; China has consistently exerted pressure on Japan in the East China Sea. Economically, Beijing uses its muscle to reward those who comply with China’s policies and punish those who don’t, and to advance geo-economic projects, such as the Belt and Road Initiative (BRI), Asian Infrastructure Investment Bank (AIIB), and Regional Comprehensive Economic Project (RCEP), designed to bring the region closer into its orbit. Strikingly, China has also abandoned its long-professed principle of non-interference in other countries’ domestic politics, extending the reach of Chinese propaganda and using investment and even bribery to coopt regional elites. Payoffs to Australian politicians are as critical to China’s regional project as development of “carrier killer” missiles.

By blending intimidation with inducement, Beijing is seeking to erect a Sino-centric regional order—a new Chinese tribute system for the twenty-first century. It is trying to reorder its external environment to its own liking, a profoundly normal rising-power behavior that only seems odd or surprising against the abnormal backdrop of the post–Cold War era. It is using the wealth and power the U.S.-led international order helped it develop to mount the most formidable challenge that order has faced in decades. And it is doing so in full cognizance that this implies progressively more acute rivalry with Washington.

Make no mistake—these efforts are having an impact. Chinese coercion short of war has dramatically shifted perceptions of power and momentum in the region, while the Chinese buildup has made the outcome of a Sino-American war more doubtful from a U.S. perspective. “America has lost” in Asia, president of the Philippines Rodrigo Duterte announced in 2016; Manila must now reposition itself accordingly. Similarly, RAND Corporation analysts assessed in 2015 that “over the next five to 15 years . . . Asia will witness a progressively receding frontier of U.S. dominance.” The region could soon hit a series of “tipping points” at which U.S. commitments to partners such as Taiwan, or even the Philippines and Japan, become less credible. As the power balance shifts, the United States could find itself in a position where it might actually lose a war in the Western Pacific—or it could simply lose the region without a shot being fired as countries make their calculations and accommodate Beijing.

If China represents the greatest long-term challenge to the American-led system, the resurgence of great-power competition is even more acute in Europe. For many Russians, the post–Cold War era was not a time of triumph and tranquility. It was a time of weakness and humiliation, a period when Russia lost its great-power status and was impotent to resist the encroachment of U.S. and Western influence. As Russia has regained a degree of strength, then, it has sought to reassert primacy along its periphery and restore lost influence further abroad, often through measures less subtle and more overtly aggressive than China’s.

Moscow has twice humiliated and dismembered former Soviet republics that committed the sin of tilting toward the West or throwing out pro-Russian leaders, first in Georgia and then in Ukraine. Following the latter conflict, Russian president Vladimir Putin invoked the concept of Russkiy Mir, or “Russian World,” staking a proprietary claim to dominance of the states on Moscow’s periphery. To further this project, Russia has also worked to weaken the institutions that maintain European security. It has sought to undermine NATO and the European Union via cyberattacks, military intimidation and paramilitary subversion, financial support for anti-EU and anti-NATO politicians, and dissemination of fake news and other forms of intervention in European and U.S. political processes. In 2016, Russian intelligence operatives reportedly tried to decapitate and overthrow the government of Montenegro to prevent it from joining NATO—a cold-blooded, if unsuccessful, act of competition with the West. In 2013, Russia’s chief of general staff, Valery Gerasimov, described such tactics as “new generation warfare.” That label describes a blending of military, paramilitary, economic, informational, and other initiatives to sow conflict and unrest within an enemy state or coalition, and it reflects the deadly serious nature of the struggle in which Russian leaders believe they are engaged.

As Gerasimov’s writings indicate, military muscle and other forms of coercion are not Moscow’s only tools. Russia has simultaneously used energy flows to keep the states on its periphery economically dependent, and it has exported corruption and illiberalism to non-aligned states in the former Warsaw Pact area and Central Asia to prevent further encroachment of liberal values. And while Russia’s activities are most concentrated in these areas, Russian forces also intervened in Syria in 2015 to prop up Bashar al-Assad and expand Kremlin influence in the broader Middle East. Since then, Moscow has worked to position itself as a security patron to countries and actors from Libya to Iran, and thereby create a geopolitical counterpoise to U.S. influence.

In doing all this, Russia has upended the basically peaceful European order that emerged after the Cold War and once again made interstate aggression a tool of regional politics. Its leadership has shown a penchant for risk-taking that has repeatedly thrown foreign observers off-balance; it has adopted bold and creative strategies that play on Western complacency and divisions. Russian leaders have explicitly called for the emergence of a “post-West world order,” leaving little doubt as to their dissatisfaction with any liberal international system based on American primacy. And as with China, these actions have been underwritten by a significant military buildup that has enhanced Russian power-projection capabilities and left NATO “outnumbered, outranged, and outgunned” on its eastern flank. “If I wanted,” Putin reportedly bragged in 2014, “in two days I could have Russian troops not only in Kiev, but also in Riga, Vilnius, Tallinn, Warsaw, and Bucharest.”29 That same year, secretary of state John Kerry was mocked for describing Russian behavior as something out of the nineteenth century. Yet what he captured was that Russia was simply behaving like Russia again. It was asserting its great-power prerogatives in ways that seemed anomalous only to those with very short historical memories.