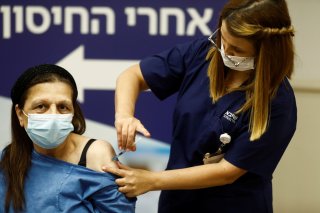 The World Health Organization’s (WHO) annual World Health Assembly (WHA) will kick off later this month in Geneva. The WHA will put Israel under the microscope—just like it did last year and the year before that. The purpose, of course, is not to praise Israel’s early success with Covid-19 vaccinations, the fact that almost half of its new doctors are Arab or Druze Israelis, or that Israel trained Gazan medical professionals to deal with the coronavirus. The purpose is to damage Israel’s reputation. This year, the assembly should finally put aside this double standard and just focus on public health.

The WHA began its annual tradition of singling out Israel in 1968, at the first meeting after the Six-Day War. The assembly called on the WHO director-general to report on individuals displaced by the war. Since then, the WHO’s Executive Board has submitted agendas annually ensuring resolutions and reports on the matter. Amid a global pandemic, this agenda item consumed a full day of last year’s eight-day conference.

The mandate’s inclusion of the Golan Heights forced the WHO to note in its 2021 report that individuals in that territory have “full access to universal health care.” This stands in stark contrast to Syrians suffering through a decade-long civil war and the hospital-bombing Bashar al-Assad regime.

The WHO’s 2021 report on Israel, like ones before it, made no mention of Hamas’ deleterious effects on Palestinian health care. During the 2014 war, Hamas operated out of Gaza’s Shifa hospital, turning its doctors into human shields. While Gaza was in a Covid-19 lockdown in August 2020, Hamas launched numerous incendiary devices at Israel, thereby increasing Israel’s restrictive measures on the coastal enclave. Hamas has a long history of abusing medical travel permits to Israel to conduct terrorist attacks. And Hamas diverts Palestinian funds that could have provided for healthcare to instead provide for deadly weapons. None of this made the cut.

The report then qualified its sparse criticism of the Palestinian Authority (PA). The WHO report clarified that the PA severed ties with Israel in May 2020 “in the context of the further annexation of large parts of the West Bank announced by Israel,” but failed to mention that the annexation never occurred. The termination of ties undoubtedly hindered the collaborative healthcare efforts necessary to fight a pandemic.

Instead, the report blamed “chronic occupation” for much of the Palestinians’ health woes. Barriers to movement and limits on imports can be obstacles for Palestinian health care. But this framing, like starting a movie in the middle, does not explain how the problem began or how it can be solved. The report made no effort to understand why, after hundreds of terrorist attacks, Israel erected a security barrier and established checkpoints. Or why, in the face of thousands of rockets, Israel limits the import of dual-use items into Gaza. Asserting that the “chronic occupation” is the source of the problem ultimately serves Palestinian propaganda, not Palestinian health.

The report also repeated the claim that Israel fails to meet its obligations to vaccinate Palestinians. Following Israel’s world-leading national vaccination campaign, some activists politicized the disparity between Israeli and Palestinian vaccination rates. The WHO report cited the (incorrect article of the) Fourth Geneva Convention to argue that Israel is obligated to vaccinate Palestinians. The Geneva Conventions are explicitly for the “protection of civilian persons in time of war,” and most articles, including the one in question, stop applying a year after the “general close of military operations.” In any case, international legal expert Eugene Kontorovich notes, the Oslo Accords specifically assign the PA the responsibility for vaccinating Palestinians and supersede the obligations contained in the Geneva Accords.

Analytical deficiencies aside, the report’s main flaw is that it holds Israel to a double standard by making it the only country subject to an annual resolution and report. This double standard is a prime example of the Jew-hatred codified in the International Holocaust Remembrance Alliance’s working definition of anti-Semitism.

When the Biden administration announced it would resume funding for the WHO last year, it promised to pursue reforms of the agency. But the administration’s engagement-only strategy hasn’t curtailed the WHO’s anti-Semitism. The State Department should oppose the Israel-specific agenda item at the upcoming World Health Assembly and work to eliminate it at the next Executive Board. This will not only ensure Israel’s fair treatment but allow the WHO to address the world’s true health problems.

David May is a senior research analyst at the Foundation for Defense of Democracies. Follow him on Twitter @DavidSamuelMay. FDD is a Washington, DC-based, non-partisan research institute focusing on national security and foreign policy.