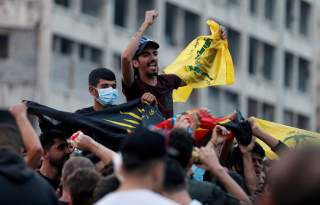 Since Mid-October, Lebanese protesters have been calling for a political reform to deal with the economic crisis. Recently the protests turned violent, with clashes between security forces and protesters and attacks by Hezbollah and Amal affiliates on the protesters.

Lebanon has designated a new prime minister, Hassan Diab, whose candidacy was proposed by Hezbollah. Having been chosen by Hezbollah, Diab’s appointment reveals the challenges to form an inclusive Cabinet able to gain the international community’s trust and unlock the needed financial assistance.

Even though Hezbollah was part of the latest government and coalition, it has an interest to sustain a weak Lebanese government. While Hezbollah has traditionally relied on gaps in Lebanon’s military power to step in and assume its place, it is currently doing the same in all places in which the government is failing, making Hezbollah a domestic political problem. Hezbollah is also a regional security problem due to its involvement in Syria, Iraq, and its affiliation with the Ayatollah of Iran; and a global problem due to its cross-border criminal and narco-terrorist activities. Hezbollah relies on a worldwide network of supporters and sympathizers that provide financial, logistical, and operational support. These include both informal networks and centrally-run enterprises that resemble international organized criminal entities.

Hezbollah is a destabilizing power in Lebanon, provoking further political, economic and civil unrest, in times when Lebanon most needs international support. Hezbollah continues to create havoc in sustaining its upper hand. The current circumstances present a significant opportunity to rehabilitate Lebanon by isolating Hezbollah.

For the first time since the 1970’s civil war, the Lebanese people across all sectarian lines are protesting against elites, government corruption, and the drainage of their public funds, with no foreseeable solution. They are calling for an unsectarian, downsized, independent technocrat government, to achieve their goals. Hezbollah is playing a significant part in actively suppressing the protests using force, albeit contained, against both civilians and reporters.

While Hezbollah would like to maintain their Robin Hood appeal in the eyes of the Lebanese people—protecting and feeding the poor while criticizing the looming corruption—they resemble the Sheriff of Nottingham, an unjust tyrant who mistreats its subjects and lives on their expense. The Lebanese people, including elements in the Shiite communities, are starting to reveal this hard truth and Hezbollah’s integrity is correspondingly declining.

The organization’s decision to fight in Syria in times of internal strife in Lebanon shattered Lebanese public’s perception of Hezbollah as a “resistance” power against the state of Israel. The toll for their “Syrian excursion” was some 1,250 Hezbollah fighters killed and exponential growth in their financial commitments.

Further complicating their triangle of allegiance are the amplified economic sanctions on Iran, Hezbollah’s cash-cow, draining its reserves and directly affecting its ability to support the local community as well as its operatives. To preserve its cash flow, there is also a fear that Hezbollah will increase its narco-terrorism activities in Europe, where it already operates.

The voices in the streets are not oblivious to Hezbollah’s identity crisis, they portray it as an opposition to their cause rather than as supportive of a stronger Lebanon, making Hezbollah especially vulnerable at this point.

The international community has yet to come up with a coherent and comprehensive plan to stabilize Lebanon. Instead, it supports Lebanon sporadically by providing it with military and humanitarian aid as well as with official development assistance. So far, these monetary efforts have not yielded the desired outcome.

Following the elections in April 2018, in a concentrated effort to stabilize Lebanon, the international community offered substantial grants and foreign investments such as the $11 billion Paris pledge, which was thwarted due to the instability of the new Lebanese government. The military aid provided by France and the United States ($105 million) also proved to be only partially effective, arguably due to reports of the increased cooperation between the Lebanese military and Hezbollah, and the funds reaching the wrong hands.

The U.S. government has been intensifying its pressure on Hezbollah and its operatives through economic sanctions, weakening both its military and financial structure, albeit, yet again, not enough to weaken Hezbollah’s political stance.

This all is to show that a more comprehensive plan that includes the weakening of Hezbollah’s monetary and political power should be utilized.

The FTO Designation as a Tool For Stabilization

The foreign terrorist organization (FTO) designation is a diplomatic tool that enables states to impose costs on foreign terrorist groups and those who might support them. The designation of a group weakens it and reduces its ability to carry out terror attacks over time. An additional by-product of designation, unique in the case of Hezbollah, is the delegitimization of its image as a political and social movement rather than a terror organization. Knowing that, and to sustain its power, Hezbollah prioritizes international recognition and legitimacy, which it finds hard to secure due to its global terror operations (examples for recent terror plots: Cyprus 2015, United Kingdom 2015, and United States 2017).

According to the U.S. Drug Enforcement Agency (DEA) and Europol, a significant portion of Hezbollah's criminal activity is being conducted on European soil, especially in Germany and France—which have both refrained from designating Hezbollah as a terror organization. While countries like the UK are starting to react to these activities by designating Hezbollah as a terrorist organization, EU policy since 2013 (designating only Hezbollah’s military wing) is to maintain its strategy of abstention from cracking down on Hezbollah’s global criminal and terrorist activities.

In addition to decreasing Hezbollah’s domestic and international legitimacy through designation, both the Lebanese institutional security structure (the Lebanese military forces) and the civilian sector require effective bolstering. A package of carefully funneled military and humanitarian aid, as well as official development assistance (ODA) and foreign investments, should do the trick. It was shown that individual countries that have designated Hezbollah as a terrorist organization, have continued to provide both ODA and humanitarian aid to Lebanon, consistently with the period before the designation and according to the circumstances in Lebanon. The same goes for maintaining trade relations with Lebanon, regardless of the act of designation.

The Lebanese protesters are chanting against Hezbollah “Here is Lebanon, not Iran” and “Terrorist, Hezbollah is a terrorist.” They are ready to overcome the sectarian divide and unite towards a reformed and healthy society, however, they are still fighting the demons of a bloody past Hezbollah is trying to preserve.

Daniel Cohen is the head of the Strategy and Intelligence program at the Abba Eban Institute, at the Interdisciplinary Center (IDC) Herzliya. He is also a senior researcher at the Interdisciplinary Cyber Research Center (ICRC) at Tel Aviv University, and a counter-terrorism and cyber expert for the Organization for Security and Cooperation Europe (OSCE). Before joining the Abba Eban Institute, he worked as a research fellow and coordinator at the Institute for National Security Studies (INSS), and as a consultant in the government and security sectors.

Liron Shilo is a Visiting Researcher at the Abba Eban Institute, IDC Herzliya. He is a Doctoral Candidate at Georgetown University Law Center and formally a Resident Fellow with the Information Society Project (ISP) at Yale Law School. Shilo also served at the Israeli Ministry of Justice as a prosecutor for international affairs.