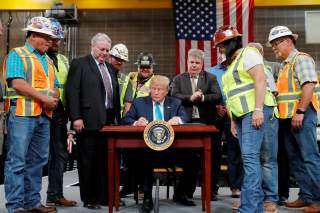 ENERGY HAS been a fundamental driver of human advancement across millennia. At the simplest level, having more energy—whether in its biological, chemical, thermal mechanical, electromagnetic or other forms—allows individuals and societies to do more. From this perspective, human history and its many contests among nations have in part reflected continuous efforts to develop, control and use energy of one type or another. Consider how Imperial Japan’s lack of oil played a role in its (ultimately self-defeating) efforts to dominate East Asia. Or how the Soviet Union’s energy wealth sustained what might otherwise have been an unsustainable political and economic system.

Energy innovation—including finding new and more efficient ways to generate and use energy—can also help to build and sustain empires. Britain’s coal-fired steam-powered mills, factories and ships propelled it to global dominance. To maintain U.S. international leadership in the face of growing competition, the Trump administration and Congress should work together to promote modern-day American energy innovation.

President Donald Trump and his team have already focused intently on energy and its role in America’s prosperity and security. They doubtless recognize that the oil and gas industry supports approximately ten million jobs, while the electric power industry accounts for about seven million. Between them, and discounting for possible overlap, these two sectors could account for roughly ten percent of American jobs in an overall labor force of 163 million. On top of this, the American Public Power Association reports that electricity sector jobs pay 50 percent above the national average, while the American Petroleum Institute says that earnings in oil and gas jobs generate three times the national mean wage. Trump regularly connects energy and jobs in his public statements.

Energy and electric power contribute importantly to the U.S. economy in many other ways as well. At the simplest level, energy and electricity drive everything else—without them, our manufacturing, transportation, agriculture and communications would shut down. Since this is an unlikely scenario, however, a greater concern is that higher energy costs make everything else more expensive, slowing growth. Lower energy costs make other activities less expensive, facilitating growth and individual opportunity. Relatively low energy costs likewise improve America’s international competitiveness in energy-intensive industries—witness the movement of some German manufacturing to the United States over the last decade.

Energy matters in U.S. national security policy too. America has pursued a decades-long strategic effort to ensure stability in the Middle East and to protect oil and gas flows that fuel not only our own economy but also those of our allies in Europe and East Asia, as well as the global economy. Some see this as an attempt to guarantee that specific hydrocarbon molecules reach the United States, and therefore hope that expanding domestic oil and gas production will allow America to reduce its imports, make the nation energy “independent” and obviate the need for U.S. engagement with the region. Yet, so long as the United States consumes oil and gas, and the Middle East sells them in substantial volumes through global markets, it will be impossible to disconnect our domestic economy from global oil and gas prices or from the security environment in the Middle East. And because a healthy economy is the essential foundation for sustained defense spending, something especially significant in an era of great power competition, the U.S. military depends in part on America’s continued access to adequate energy supplies at reasonable prices as well as open energy markets and a generally stable global economy.

While the president often refers to “energy independence” as a goal, the Trump administration has done well to search for a new concept, and a new vocabulary, to describe America’s energy policy objectives at home and abroad. “Energy dominance” is an initial step toward a new energy policy framework but moving further along that path will require serious thinking about America’s preferred destination, the most promising routes and the appropriate pace. Energy innovation should be at the center of this process.

President Trump first articulated his desire for “energy dominance” in a June 2017 speech to business, labor and government leaders at the Department of Energy. In his remarks, the president called for maximizing U.S. energy production to create jobs, boost exports and “provide true energy security to our friends, partners, and allies.” He also announced several initiatives, including efforts to develop the domestic nuclear power industry and to promote new offshore oil and gas development, steps to simplify the financing of coal-fired power plants overseas, and approvals of a new oil pipeline and applications to export additional liquified natural gas (LNG). All seemed narrowly aimed at expanding growth and output in the energy and electricity sectors. Senior officials such as Secretary of State Mike Pompeo and Secretary of Energy Rick Perry have since echoed President Trump’s emphasis on jobs and on energy exports to U.S. allies to buttress their energy security; for example, Secretary Perry has said that “the United States is not just exporting energy, we’re exporting freedom.”

Promoting growth in America’s energy and electricity sectors is a worthy goal. Yet pursuing growth in an extensive rather than an intensive manner—that is, doing more of what we are already doing, rather than continuously finding new and better methods—is not a sustainable strategy for achieving the national greatness that President Trump seeks. Nor is it adequate to ensure continuing economic growth.

First, U.S. domestic energy production, and specifically oil and gas exports, are not unlimited. BP’s highly-regarded 2019 Energy Outlook forecasts that the production of U.S. tight oil (the shale oil produced through hydraulic fracturing, or fracking) will peak in 2030, just over ten years from now. The U.S. Energy Information Administration’s Annual Energy Outlook 2019 shows a similar peak in U.S. domestic crude oil production during the decade between 2030 and 2040. The point is not that America will use up its oil—a regular prediction that has repeatedly failed to come true as innovative technologies have unlocked additional resources—but that it would be irresponsible to ignore deliberate forecasting, or to count on specific technological achievements, in setting long-term strategy.

Second, other nations are pursuing intensive strategies in their own energy sectors, including China. While still behind the United States in research and development (R&D) spending, figures from the Organisation for Economic Co-Operation and Development show that Beijing increased its overall official R&D budget (including energy and other fields) by over 12 percent from 2016 to 2017, and now spends about 88 percent of what the United States does on a purchasing power parity (PPP) basis. China still lags America in innovation, but it has caught up and even surpassed the United States in some areas, according to a 2019 report by the Information Technology & Innovation Foundation. In fact, according to the report, China secured fifteen times more U.S. patents for clean energy technologies in 2016 than in 2006. Complacence in competition is rarely the winning approach. Greater effort to promote U.S. energy innovation is the surest way to maintain the technological leadership that has been a foundation of American economic and military power.

THE TRUMP administration is in a good position to pursue this approach based on its first National Security Strategy (NSS) released in December 2017. While brief in its treatment of the topic, that document defined energy dominance both more systematically and more comprehensively than the president and some other senior officials, characterizing it as “America’s central position in the global energy system as a leading producer, consumer, and innovator.” The NSS went on to assert that energy dominance “ensures that markets are free and U.S. infrastructure is resilient and secure” and that “access to energy is diversified.” Notwithstanding the president’s unfortunate public statements expressing skepticism about climate change, the NSS explained that energy dominance “recognizes the importance of environmental stewardship” and concluded on this topic with a call for investments in innovation and in research and development to protect America’s “long-term energy security future.”

Critically, the NSS places this approach to energy within a broader national security policy that is explicitly responsive to “the growing economic, political and military competitions we face around the world” and especially to the many challenges that China and Russia present to the United States and U.S. national interests. This is an appropriate and highly consequential departure from Obama administration national security strategies that focused primarily on global threats such as nuclear proliferation, terrorism and poor governance leading to arms and drug trafficking, refugee flows or the spread of infectious diseases. But as a strategy, it requires careful consideration of U.S. interests and how best to advance them at the least cost, of the nature and scope of twenty-first-century great power competition, and of how to employ America’s greatest strengths to prevail.

Competition between the United States and China is increasingly shaping international events and is simultaneously becoming more difficult for each government to escape. According to World Bank figures, China’s gross domestic product was about one-sixth larger than America’s in PPP terms in 2017, though approximately one-third smaller on an exchange-rate basis. Whichever measure one prefers, only China is an economic peer to the United States, though admittedly a peer with complex domestic problems and few reasons to expect the return of its past rapid growth. While relations between Washington and Moscow are worse, Russia’s economy is much smaller—either one-fifth (PPP) or one-twelfth (nominal) America’s. Fortunately, steps that strengthen the foundations of American power will help the United States to compete successfully with both China and Russia.