Energy Sovereignty Will Be the Westphalian Principle of the 21st Century 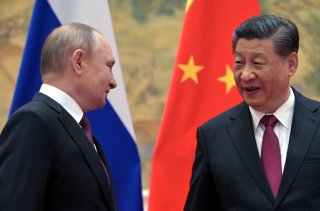 At the end of the Cold War, it appeared democracy had won the final battle in civilization’s perpetual struggle between individual liberty and authoritarianism. Some even raised the possibility democracy had prevailed and history had ended. However, revisionist powers China and Russia have revived and now threaten to bring history back with a vengeance.

The latest evidence is the recently released “Joint Statement of the Russian Federation and the People’s Republic of China, International Relations Entering a New Era and the Global Sustainable Development.”

This is the vision these two authoritarian powers have for the twenty-first-century century world order. And with a few word substitutions, it might fool many in the West into believing it was written by a U.S.-European Union diplomatic alliance as the two powers twist Western philosophical and ideological verbiage into what could be characterized as “Democracy with Communist Characteristics.”

A few days after the release of this statement, the U.S.-EU Energy Council released a joint statement, largely in response to the current energy crisis in Europe and Ukraine, framed within the broader context of energy security and climate change.

The China-Russia statement appeals to the world on the grounds that each nation “can choose such forms and methods of implementing democracy that would best suit its particular state, based on its social and political system,” where “it is only up to the people to decide whether their State is a democratic one.” Essentially, a country is free to develop as it chooses, without respect to Western norms for human rights or climate change.

The U.S.-EU statement appeals on the grounds of supporting countries in market and regulatory reforms “to ensure robust decarbonization efforts, a swift, just and socially inclusive energy transition to a climate-neutral future, and to address energy poverty including in Africa.”

The battle for the hearts and minds of emerging economies and uncommitted nations is a core objective of great power competition, although the outcome is determined by the decisions of the weaker powers—not by great powers. Great powers may compete, but weaker powers determine who wins.

In the energy space, many of today’s weaker powers are fledgling economies in dire need of reliable and secure energy. However, as evidenced by the U.S.-EU statement, the West is focused on renewable energy and decarbonizing its economies by moving away from more reliable fossil fuels. This doesn’t connect with the unprecedented and immediate energy needs of emerging regions who understand full well they can’t industrialize their economies on the narrow shoulders of intermittent energy resources.

Energy as the currency of the twenty-first century, just like oil in the twentieth century, is starting to dominate decisionmaking by rational actors and allies in Europe.

Russia and China recognize this disconnect and are capitalizing on the opportunity to gain geopolitical influence through oil, natural gas, coal, civilian nuclear partnerships, and renewable technologies—an all-the-above offering. This is particularly problematic with civilian nuclear power—a technology the U.S once dominated globally but in which it has been largely dormant for the past thirty-plus years. Problematic because China and Russia have taken advantage of America’s dormancy and established themselves as the dominant partners for nuclear collaboration. This, in and of itself, is a threat to U.S. and global security as China and Russia position themselves to be the global steward of the nuclear fuel cycle while leveraging their nuclear collaborations as extensions of the state to restructure the world order according to their own designs and interests. This is not what the founders of U.S. nuclear power policy envisioned in the 1940s-50s.

However, an opportunity is at hand that can be leveraged for advancing America’s efforts to revitalize its civilian nuclear enterprise and compete once again on the world stage.

The U.S. Army recently released its Climate Strategy, reflecting the heightened climate concerns conveyed in the U.S.-EU joint statement and in keeping with President Biden’s executive order “putting the climate crisis at the center of foreign policy and national security.” The strategy rightly identifies adaptation, mitigation, and resilience as overall objectives, but it leans heavily on renewables without considering small modular nuclear reactors (SMRs).

The extent to which renewables can be deployed without sacrificing energy reliability and security and without compromising the military’s capacity to meet its strategic objectives is questionable at best.

SMRs should be the takeoff point for any military climate strategy. The DoD has had a long history of sponsoring leading innovation and accelerating commercial benefits for the globe.  In this instance deploying a new fleet of SMRs onto military installations can address resiliency, carbon reduction, improved warfighting effectiveness, and the lack of a viable commercial industry.

A central problem for the private U.S. nuclear sector is cost competitiveness for the current nuclear fleet and for new construction. For currently operating reactors, natural gas and subsidized renewables are oftentimes less expensive at the margins. Moreover, high capital costs for large nuclear power plants are disincentives to attracting investment dollars for such long-term projects. SMRs offer lower construction costs and shorter construction schedules. But, without a demand for SMRs and a book of business, economies of scale will remain elusive and costs will remain high.

By including SMRs as a necessary technology in its long-term energy security and climate strategy, the U.S. DoD can create a strong demand signal that would, in turn, lead to the development of an efficient nuclear supply chain and, eventually, lower costs. This not only benefits U.S. military, it also benefits the U.S. civilian nuclear sector as SMRs become an economically viable option that invites private capital.

Such an approach would represent a strategic effort to move U.S. nuclear down the cost curve quicker and position it as an attractive partner for nuclear development in emerging economies. Without a sustained demand signal and an efficient supply chain, the road to nuclear deployment in the U.S. will be much longer. The longer the road is, the more strongly it plays to the advantage of China and Russia by positioning them as the more reliable partner for nuclear development.

The United States is in a twenty-first-century competition for hearts and minds, and much of that competition will revolve around energy sovereignty. The Eurasian Economic Union-Belt and Road Initiative mentioned in the China-Russia statement describes a China-Russia economic development bridge that should awaken U.S. policymakers and corporations to the realization that global markets are at risk of being overrun and monopolized by China’s state-owned enterprises.

Moreover, U.S. policymakers who are determined to restructure America’s industrial base around renewable energy for the purpose of reducing carbon emissions and battling climate change should take heed that China and Russia are structuring their industrial bases to battle America and its allies and to dominate Eurasia. They are weaponizing energy and energy technologies as instruments of national power to achieve their geopolitical objectives and shape a new world order to suit their own authoritarian interests.

History’s competition between democracies and authoritarian powers hasn’t ended and shows no signs of ending any time soon. Today’s great power competition must be continually foreseen and managed, so it becomes the history we want for our posterity. Moreover, democracy doesn’t have the intrinsic momentum to sustain itself. Democracy is maintained through strength, engagement, and the pursuit of primacy by a nation that is founded on individual freedom and is continually forming a more perfect union—a transparent democracy for all to see.

“Energy Sovereignty” will be the “Westphalian Principle” of the twenty-first century. It will be driven by the need for abundant, baseload, and clean energy.  It will show nuclear power (as Eisenhower projected) will be critical to energy sovereignty. The paradoxical danger of over commitment to clean will not be lost.

David Gattie is an Associate Professor of Engineering at the University of Georgia’s (UGA) College of Engineering, and a Senior Fellow at UGA’s Center for International Trade and Security. He has provided testimony on energy, climate, and nuclear power policy before the U.S. House Energy and Commerce Committee.

RDML (ret) Michael Hewitt, U.S. Navy, is Co-Founder and CEO of IP3 Corporation and CEO of Allied Nuclear Partners. IP3 is the lead U.S. integrator for the development and operations of peaceful and secure civil nuclear power in the global marketplace. IP3’s vision is to create threuriving, peaceful environments in critical world markets through the development of sustainable energy and security infrastructure via public/private initiatives and industry-led partnerships.