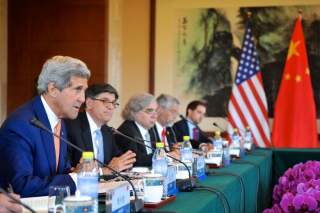 In “How China Sees America’s Moves in Asia,” Professor Lyle Goldstein highlights the disturbing conclusion of a recent essay by three Chinese analysts: China is under siege, pinned down by a U.S. strategy of “containment” that aims to encircle their country and undermine its security interests.

Professor Goldstein is right to point out that concerns about U.S. "containment" are pervasive in Chinese foreign policy and national-security assessments, and that this is a fear the United States cannot ignore as it strengthens its focus on Asia. Professor Goldstein’s article is also an important reminder that to be successful, a strategy of deterrence requires a corresponding message of assurance. Security-studies scholars and military strategists have long recognized that deterrence and assurance are two sides of the same coin, and that some level of assurance is required to encourage a potential adversary to exercise restraint.

Yet we disagree in important ways with three aspects of Professor Goldstein’s argument. First, his assessment gives far too much weight to a single assessment published in a relatively minor Chinese journal, one that appears to go well beyond more mainstream discussions among PLA and foreign-policy specialists about the challenges associated with what many in China view as U.S. "containment.”

Second, his article obscures the most dangerous dynamics in Asia by overstating the destabilizing nature of U.S. policy and ignoring the region-wide and deleterious effects of Chinese assertiveness.

And third, he mischaracterizes U.S. policy by assuming that differences on maritime disputes are dominating America’s agenda with China and crowding out political bandwidth and will to cooperate on issues of common concern.

We address these issues in turn.

It is clear that many Chinese analysts see the "rebalance" as highly threatening, but this is a minority view compared to authoritative Chinese sources that tend to carry more balanced assessments. Chinese publications by analysts affiliated with official institutions like the PLA’s Academy of Military Science (AMS) and National Defense University (NDU), think tanks linked to other parts of the Chinese government like the China Institutes of Contemporary International Relations (CICIR), and the Central Party School reveal deep wariness about America’s Asia policy, but also suggest that Beijing believes it can work with Washington to manage the associated challenges.

More disturbing than Professor Goldstein’s sourcing, however, is his diagnosis of the cause of U.S.-PRC friction. Washington think-tank assessments of PLA modernization and Chinese coercive diplomacy are not "poisoning" the U.S.-Chinese relationship. Instead, the principal factor undermining regional stability is China’s more assertive behavior toward its neighbors, not the actions of the United States, its allies, or other countries in Asia. While tensions between China and U.S. allies like Japan and the Philippines have dominated the headlines, a growing list of countries—to include non-U.S. allies such as India, Indonesia, Vietnam, and Malaysia—have expressed alarm at Chinese behavior and are responding accordingly by modernizing their militaries and building stronger security partnerships with the United States and each other.

Professor Goldstein’s article then prescribes a dangerous policy of retrenchment that would only serve to aggravate the risks of crisis and conflict. After all, the most dangerous rivalries in Asia today are between China and its neighbors, not China and the United States. A disengaged or acquiescent Washington would only intensify fears and insecurity in regional capitals and increase the likelihood of arms racing, miscalculation and violence. The logic of the rebalance is precisely to avoid this outcome by at once seeking to build stable ties with China while reassuring U.S. allies and partners.

Finally, Professor Goldstein concludes by warning that Washington is “most likely at the November meetings in Beijing to squander limited bandwidth trading slurs over the fate of inconsequential reefs.” This would be worrisome were it not for the fact that it’s inaccurate. In fact, consistent with the approach that Goldstein himself advocates, high-level U.S. officials have been engaging in shuttle diplomacy with their Chinese counterparts over the last several months to advance U.S.-Chinese cooperation on issues ranging from climate change and Ebola to ISIS and Afghanistan. As a result, the upcoming meetings are much more likely to focus on efforts to both enhance practical areas of collaboration and better manage areas of difference.

In the final analysis, we agree that U.S. analysts should pay attention to the full range of debates on foreign and defense policy in China, but we should not overemphasize the views at the far end of the spectrum—still less should we let these views dictate U.S. policy. Professor Goldstein is right that the risks of strategic rivalry are worthy of serious attention, but the best way to avoid the destabilizing effects of military competition is sustained U.S. engagement with China and the region—precisely what U.S. policy has been seeking to achieve.

Michael S. Chase is a Senior Political Scientist at the RAND Corporation and an Adjunct Professor of China Studies and Strategic Studies at Johns Hopkins School of Advanced International Studies (SAIS).

Ely Ratner is Senior Fellow and Deputy Director of the Asia-Pacific Security Program at the Center for a New American Security (CNAS).