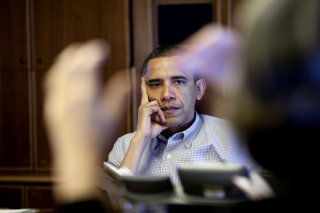 Last week, President Obama vowed he would not let the Keystone XL pipeline project go forward until the process played out. Days later, it did again (and not just in the Congress).

The White House had seized on a court challenge to the project, working its way through the Nebraska court system, as its latest excuse for obstructionism. On Friday, the Nebraska Supreme Court overturned a lower court decision in the case, clearing the way for the new Governor, Pete Ricketts, to approve the pipeline’s route through the Cornhusker country. Ricketts campaigned as a staunch supporter of the project and handily defeated his anti-pipeline opponent, Chuck Hassebrook, 58 percent-39 percent, in last year’s election.

Mr. President, the process is played out.  It’s been played out. It’s time to approve Keystone XL.

That’s certainly the view in Congress. Even before members of the 114th Congress had been sworn in, the new Senate Majority Leader, Mitch McConnell (R-Ky.), announced that the Upper Chamber’s first order of business would be a vote on the Keystone XL pipeline (A promise which he appears to make good on, as the bill.

Building the northern leg of the pipeline offers many advantages: jobs, economic growth and 830,000 barrels of oil per day from a friendly, reliable trading partner—Canada. As for potential downsides, the State Department has commissioned five major studies of the project (four of them on Mr. Obama’s watch), and each determined that the pipeline would pose minimal environmental risk and have virtually no effect on global warming.

The only logical decision would seem to be: green light the project.  Yet last week President Obama threatened to veto any Keystone XL bill that reaches his desk. Top of form White House Press Secretary Josh Earnest tried to justify the president’s position by inferring that, if lawmakers were to approve the project now, they would somehow be cutting procedural corners and recklessly rushing to judgment.  There’s a “well-established process in place” for approving projects like Keystone XL, Earnest said. He would have been more accurate to say there was a well-established process in place. And it’s been followed to a tee.

TransCanada received its presidential permit for the first two phases in March 2008. From beginning to end, the process took 23 months. That pipeline is in operation and ships crude oil from Hardisty, Alberta, to Nebraska and then to Patoka, Ill. for refining.

In September 2008, TransCanada applied for a presidential permit to build the next two phases of the system, Keystone XL. Today, 76 months later, the company is still waiting. During that period, numerous studies have established three key points: Keystone XL is good for the economy, is environmentally safe, and will not contribute significantly to climate change.

Opponents try to minimize the job numbers, saying that the pipeline will create only “a handful” of permanent jobs. While the permanent job growth will be small, that half-truth dismisses the tens of thousands of construction jobs that the pipeline project would create. In fact, the southern portion, which did not require President Obama’s approval and has been built, has already created nearly 5,000 construction jobs. The administration still talks about the need to create “shovel-ready” jobs.  Well, this project would do that—Big Time—and without costing taxpayers a dime.

Rather than standing as an argument against the Keystone XL, the fact that it will employ only 35 to 50 permanent workers when completed indicates how remarkably efficient the pipeline is. The high output of labor generates value and wealth and frees up Americans to be more productive elsewhere in the economy, in the same way that one man on a backhoe loader increases efficiency and frees up a group of men with shovels to do other work.

The construction of the southern leg has proved a boon to the Oklahoma and Texas, injecting $2.1 billion and $3.6 billion into their economies, respectively. The states through which the northern leg runs will reap similar economic benefits. Building Keystone XL can be accomplished without the crutch of taxpayer dollars; in fact, it will result in billions of dollars of tax revenue for the states through which it runs.

When it comes to accidents, injuries, and fatalities, pipelines are the safest mode of transporting oil and gas. And after five exhaustive environmental reviews, the Department of State determined that Keystone XL poses minimal environmental risk to soil, wetlands, water resources, vegetation, fish, and wildlife.

Yet somehow, Keystone opponents appear to have persuaded President Obama that there are valid climate concerns about the project. At a June 2013 speech at Georgetown University, Mr. Obama remarked, “The net effects of the pipeline’s impact on our climate will be absolutely critical to determining whether this project is allowed to go forward.” But as the State Department’s final environmental impact statement noted, the Canadian oil is coming out of the ground whether Keystone XL is built or not. Either way, the difference in greenhouse gas emissions is miniscule.

With the old arguments against Keystone XL thoroughly debunked, opponents are desperately conjuring up new ones. One recent argument asserts that, in the current era of cheap oil, Keystone XL is not a worthwhile financial investment. Who’s to say that’s right, and if it is… so what? If a restaurateur wants to build a new eatery on the same block where cheap food is readily available, should the government refuse to let him build because it thinks the economics don’t look good? William Durant founded GM while the economy was still reeling from the Panic of 1907, yet that dicey move has paid off well for millions of Americans.

The government has evaluated the project as environmentally safe. The decision as to whether or not to build it should now be left to TransCanada. The smart money says that, even though oil prices are lower now than they have been for years, Keystone XL remains viable. America still needs pipeline infrastructure to keep up with the rapidly expanding supply. Moreover, industry makes investment decisions looking decades into the future, not just on current conditions and short-term projections. While it is certainly possible that low oil prices could postpone Canadian tar sands production and prohibit Keystone XL from reaching its peak volume in the near future, oil prices could rise as quickly as they fell. Businesses are much more flexible and much better equipped than short-sighted politicians in Washington to deal with changing economic circumstances.

Despite bipartisan Congressional support, approval from several cabinet secretaries and the general public’s favorable attitude toward building Keystone XL, one obstacle has blocked progress for six years.  President Obama needs to get out of the way.