An Era of Great-Power Leaders 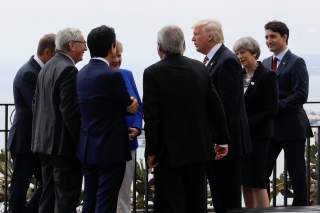 Alexis de Tocqueville suggested that whereas aristocracies often exaggerate the importance of individual leaders, democracies tend to make the opposite mistake. In a democratic form of government, Tocqueville observed, the most flattering self-image is to assume that national leaders are entirely captive to broader popular and structural forces.

Today we live in an era of international politics where, as always, national leaders are subject to structural pressures and constraints. Yet to a remarkable degree, our times also showcase the sheer significance of individual leadership at the highest level.

Consider the current international role played by arguably the eight leading nations in the world: the United States, China, Russia, India, Japan, Germany, France and Great Britain. What makes these nations especially significant is that each of them have a range of economic and military capabilities well beyond that of most UN General Assembly members. It’s reasonable to refer to these eight nations as “major powers.” And even between them, you might say that some are more equal than others. For international relations scholars, this means we live in a global system that is somewhere between unipolar and multipolar. The United States is still the world’s most powerful country; China may be on track to match it; and there are a number of other major powers to be considered.

Historically, great powers—by virtue of their very capability to do so—tend to interpret their interests broadly, and then act assertively to protect them. They throw their weight around. At the same time, however, individual leaders can make a great deal of difference in deciding exactly how this is done, and to what extent.

Recently declared “the world’s most powerful man” by the Economist, China’s Xi Jinping rules over the world’s most populous country and its second largest economy, which continues to grow faster than any major power besides India. He also commands a rapidly modernizing military. Since assuming office in 2012 with a nationalist slogan of the “China dream,” Xi has consolidated power faster than his cautious predecessors. He emerged triumphant from the recent party congress with an elevated status on par with Mao Zedong and Deng Xiaoping. The collective leadership system Deng imposed in the aftermath of the disastrous Cultural Revolution seemingly no longer applies: power resides only in Xi. Xi has a clear goal and a timetable to propel China into an advanced global power by 2050 while following the Chinese political system distinct from Western liberal democracy. He intends to project Chinese influence in the Asia-Pacific region and beyond.

Japan’s Shinzo Abe became prime minister the second time in 2012, in the midst of economic stagnation, territorial disputes with China and South Korea, and a crisis of public confidence. Abe strengthened the alliance with the United States and adopted measures to revive the economy. He gambled with a snap election held on Oct 22, 2017, and even though he looked shaky at times, his ruling coalition won a major electoral victory. With his well-established nationalist credentials and a supermajority in the National Diet, Abe will likely try to revise the Japanese Constitution to allow a more active military role for the country. He remains personally unpopular but conservative Japanese voters prefer stability. Abe may now become Japan’s longest serving prime minister in the postwar era. He is determined to prevent China from dominating in Asia and the world and has pursued a proactive foreign policy, departing from the postwar pacifist approach in foreign affairs.

Like Abe, India’s Narendra Modi came to power through democratic election in 2014. Unlike Abe or Xi, Modi came from a humble background but rose as a Hindu nationalist politician. Like all nationalists, Modi wants to make his own country “great again.” Modi has adopted some reform measures to make India more competitive in the global market, achieving strong results. In November 2016, an overly confident Modi adopted a demonetization to remove untaxed “black money,” which backfired, doing damage to India’s booming economy. Modi is both learning from China’s development experience and standing firm against Beijing. A successful India would serve to show China and other countries that a populous country can achieve rapid economic growth while maintaining a democratic system. Modi has moved closer to the United States, Japan and Australia in countering Beijing’s growing influence, but he has continued to follow India’s traditional nonaligned/multi-alignment strategy in order to maximize policy options for his country.

Russia has vast geographic depth, traditions of great-power activism, and some impressive regional military capabilities. Apart from oil and gas exports, it is not in the first rank of the world’s leading powers economically. Yet under Vladimir Putin, Russia clearly punches above its economic weight in today’s international system, often as a spoiler, and not to be trifled with. Putin’s Russia uses a creative array of economic pressure, covert action, realpolitik diplomacy, disinformation, and hybrid military capabilities to expand its sphere of influence within the former Soviet Union and beyond. It is not one of the world’s most wealthy countries, but it uses what capabilities it has, quite ruthlessly, to ensure that it can never be ignored. Putin’s own inclinations have a great deal to do with this.

The European Union may be viewed by some as a model for transnational governance, but in reality when it comes to decisions for war and peace each national capitol makes its own decisions—and the three most significant are London, Paris and Berlin.

Britain’s Theresa May leads a country wrestling with its own identity, and reasserting its national independence by exiting the European Union. Last year, after taking over as Prime Minister, May got off to a strong start. But her election performance this June was disappointing, and she has since stumbled on occasion. Britain in many ways now looks inward, and May’s government is preoccupied with Brexit negotiations. London simply does not play the global role it once did. In part, this is due to the structure of circumstance, including a long-term decline in relative power capabilities. But Britain’s current foreign-policy reticence is also partially due to May’s own leadership style.

France’s Emmanuel Macron, only elected to the presidency a few months ago, faces mounting domestic criticism over proposed economic reforms. Yet as a foreign-policy leader, he aims to project a traditionally Gaullist sense of French grandeur, combined with staunch commitment to liberal international order. Macron looks for close cooperation with Germany to refurbish and strengthen the European Union, while simultaneously embracing an active French strategic and diplomatic role overseas. His foreign-policy project is very different from the one that would be pursued, for example, by the National Front’s Marine Le Pen.

Germany’s Angela Merkel is low-key in manner, and politically weakened by recent electoral setbacks. Yet after twelve years as chancellor, she is a presence many Germans still find stable and reassuring. Despite modest increases in defense expenditure, Berlin today is essentially a commercial and civilian power, not primarily a military one, and Germans tend to be deeply skeptical of military solutions to strategic problems. Abroad, Merkel adapts tactically as necessary, including on issues of migration. She aims to embody the German commitment to fiscal responsibility, including within the EU. But like Macron, she is fundamentally committed to the European Union, and to liberal norms internationally. The two of them look to work together where possible in bolstering the Franco-German engine of EU cooperation.

President Donald Trump was elected on a platform of American nationalism, on issues including trade, immigration and national security. In practice, there are more continuities with previous administrations than is sometimes acknowledged either by critics or supporters. America’s international-alliance commitments dating back to the 1940s have not actually been dismantled. The United States pushes back aggressively against certain hostile states including North Korea, Iran, Cuba and Venezuela. At the same time, Trump has made a set of significant choices that perhaps no other U.S. president would have made—Democrat or Republican. He has for example demanded significant trade concessions from China; withdrawn the United States from the Paris climate accord; tried to implement an extensive travel ban that faces ongoing challenges in American courts; and proposed deep cuts in U.S. international expenditures. Whether observers support Trump or not, they would be hard pressed to argue that he has not made a difference to American foreign policy.

One common theme, looking at the combined impact of the leaders mentioned above, is not only that individual figures can make a difference, but that the current overall trend during the past couple of years has been toward resurgent nationalism and great-power competition under increasingly multipolar conditions. Germany’s Angela Merkel is the obvious holdout against these trends, for reasons both personal and domestic. But a verbal commitment to liberal international order, no matter how sincere, does not shelter leaders or their publics from the realities of intensified geopolitical competition. Macron is interesting because he seems to have both a sense for liberal norms, and a sense for power politics.

In any case, contrary to much current analysis, the key distinction in the end is not primarily between leaders who embrace nationalism and leaders who do not. An authoritarian nationalism is very different from a democratic one, including with regard to foreign affairs. Most of the world’s major powers today are democracies, with democratically elected leaders. China and Russia are not. The United States and its democratic allies should therefore take care to pursue policies that constrain and counteract Sino-Russian cooperation, rather than permitting or enabling it. This would be a constructive Western response in an era of great-power leaders.