Erdogan Is Playing for Keeps in Northern Syria 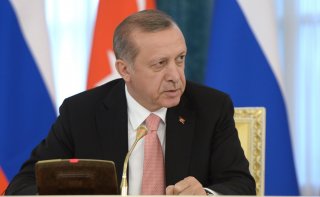 Erdoğan’s seizure of enhanced powers through the recent constitutional referendum elicited justified concern from observers—but the vote only makes official Turkey’s reality for the last decade. The vote undermines, if not destroys, democracy in Turkey. Yet the real change will occur in Turkish foreign policy. We have watched Erdoğan lay the groundwork for this change in his growing relationship with Vladimir Putin, most recently in Astana. The increased control his referendum bought him is, crucially, control over Turkey’s arguably most important institution—the Turkish Armed Forces (TSK). Its operations in northern Syria ostensibly target Kurdish fighters linked to the Kurdistan Workers’ Party, a separatist insurgency in southeastern Turkey. In Erdoğan’s newly fortified hands, these operations are becoming the vehicle to achieve his personal ambitions to outdo Mustafa Kemal’s legacy and establish himself as the lord of a resurgent Ottoman state. The international community, especially NATO, needs to handle Erdoğan carefully to avoid this outcome—certainly more carefully than placing heavy weaponry in his backyard.

Since the referendum result, Turkey has undertaken several actions to improve its position in Syria. Major airstrikes in Derik and Sinjar targeted Kurdish fighters and strayed dangerously close to American personnel embedded there, sparking ground skirmishes with YPG forces around Tel Abyad. On the diplomatic front, the Astana agreement establishing safe zones in Syria names Turkey as the guarantor of Idlib Governate’s integrity. Flare-ups are frequent in Idlib Province because sections are in the hands of rebel groups, Free Syrian Army fighters and regime troops. Escalation would provide an excuse for the TSK to deploy en masse in Idlib, allowing them to extend their current foothold in Syria and close the gap with Turkmen fighters concentrated around regime-held Latakia. It would also allow Turkish forces to close off the western Kurdish front, boxing YPG territory between Turkish troops and the regime line.

With his new powers, Erdoğan is eager to distract from the circumstances of his victory. Annexing northern Syria would do just that, but it would also satisfy a number of Erdoğan’s ambitions and those of the TSK to boot. The Turkish military seeks to encompass Kurdish militia territory, which they see as key sanctuaries for PKK affiliates; enveloping that territory would allow them to combat this perceived threat with impunity. Erdoğan’s goals are more personal. Capturing the swath of land stretching from Aleppo to Raqqa would finally allow him to claim an achievement Mustafa Kemal could not. Indeed, Ataturk wisely cut his losses in Syria and Iraq through the Treaty of Lausanne to secure what borders he did have without overextending. Erdoğan has built his political career both implicitly and overtly on the claim to Ataturk’s mantle. Incorporating northern Syria would represent a victory of Erdoğan over Ataturk, and it would support the neo-Ottoman narrative he has espoused throughout his time on the national stage. It is also important to note that seizing this land could support his efforts to court Turkey’s growing Syrian Arab demographic, well on its way to becoming a powerful voting bloc. Having already styled himself the guardian of Syrian Sunnis through carefully timed photo shoots with prominent migrants and promises of post-referendum voting rights, Erdoğan could spin northern Syria’s absorption into a gift to his new Syrian voters.

The international community, and especially NATO, must not underestimate the scope of Erdoğan’s ambition. He is the picture of political pragmatism, and his feud with Fethullah Gülen demonstrates that no ally, no matter how loyal, can share his spotlight. He also understands his political base, most clearly displayed in his live broadcast rally in Trabzon before the referendum vote during which he extolled his parents’ working class, Black Sea region roots. That political base, fired by his promises of strong leadership and restored Turkish primacy, will support military action in Syria, particularly out of a desire to recapture lost Ottoman lands and protect Turkic minorities living there. Armed with such justification, and remembering Assad’s refusal to heed his diplomatic overtures at the outset of the Syrian civil war, Erdoğan is not likely to pass up an opportunity to cement his legacy in Turkish history while degrading his foe in Damascus. The recent thaw between Erdoğan and Assad reflects Russia’s influence more than Ankara’s interests. Annexing northern Syria does not run directly contrary to Putin’s aims in Syria so long as Erdoğan does not run afoul of his staunch support for the Assad regime. So long as Assad sits in Damascus, Erdoğan may exercise latitude in northern Syria, with Putin’s permission.

The greatest impediment to Erdoğan’s advance on northern Syria remains the American commitment to the PYD fighters it has fostered over the years. Already a point of contention with Ankara, the TSK appears more content to strike first and fend off American ire later. The United States can continue to insist on its commitment to Kurdish fighters, but that will not stop Turkish soldiers from taking what shots they can, even at the risk of injuring American service members. Ultimately, Turkey is confident in the superiority of its position as a NATO member and its possession of Incirlik Air Base. Turkey remains critical to U.S. military operations in the Middle East and beyond, despite the undemocratic referendum result. Secure in that knowledge, Erdoğan will push the envelope as far as he can—all the way to Raqqa, perhaps.

Erdoğan will not be intimidated from his path. Placing more sophisticated arms in the hands of Syrian Kurds might support the narrow goal of defeating Daesh, but it will also provoke Turkey’s justified concern that the United States will lose track of those weapons after Raqqa falls. That uncertainty is more than enough to prompt Turkish escalation against Syrian Kurds, in an effort to avert transferal of those heavy weapons to PKK affiliates. The Trump administration may have warned Turkish military and intelligence officials in a high-level meeting on May 6, but they will need to work harder to dissuade those same officials from their anti-Kurdish mandate in Syria.

If NATO and the United States want to protect their interests in northern Syria and rein in Erdoğan’s ambition, they must find leverage proportionate to the value Turkey assigns its Syrian involvement. The Turkish president will visit Washington, DC next week, giving Mr. Trump a rare opportunity to appeal to him face to face. He must make full use of that chance, for the sake of the United States’ Kurdish partners as much as its own service members embedded with them. Erdoğan’s good graces will not come cheap, but they pale in comparison to the cost of allowing him to outmaneuver NATO interests in Syria.

Nicholas W. Norberg is a graduate of Georgetown University with a career specializing in the Middle East and Turkey. The views expressed in this article are personal and do not reflect those of any employer or academic institutions.