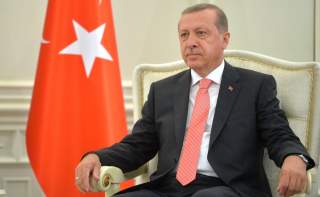 American policymakers ask if Turkey’s increasingly autocratic president, Recep Tayyip Erdogan, can really be counted on as an ally against international terrorism—or any other enemy, for that matter.

Appeasing Erdogan, in hopes of forging an alliance against the radical Islamic terrorists, may be tempting, but the incoming Trump administration and the new Congress need first to cast a clear eye on his regime’s drive toward dictatorship and its simultaneous drift toward anti-Americanism.

The facts are inescapable: Having fired some 115,000 government employees and detained more than thirty-six thousand journalists, judges, academics, business leaders, military and police officers—all under the guise of punishing the perpetrators of a failed coup last July—the Erdogan government stands alone among NATO members in its blatant violations of democratic norms and the rule of law.

While suppressing peaceful political opponents, Erdogan has failed to thwart the recent wave of terrorist attacks, including the fatal shootings of at least thirty-nine people in an Istanbul nightclub on New Year’s Eve, the assassination of the Russian ambassador at an Ankara art gallery in December and, most recently, the fatal explosion in Izmir, which killed two.

Erdogan’s government as of now is not a reliable NATO partner. After the abortive coup, the regime briefly cut off electrical power and closed the airspace around Incirlik Air Base. This hostile action temporarily halted joint Turkish-U.S. operations against ISIS, while warning that Erdogan’s government may use the base as a bargaining chip against the U.S. government. Turkish officials, including Interior Minister Suleyman Soylu, meanwhile gave credence to conspiracy theories that the United States was involved in the not-well-organized attempt to seize power.

Other signs of estrangement from the West: Ankara wants to purchase new missile systems from China rather than the United States. It also has expressed interest in joining the Shanghai Cooperation Organization, rather than the European Union.

Worse yet, the Erdogan government has been playing a double game in the fight against terrorism. Having delayed in branding ISIS a terrorist organization, and slow-walked combat operations against ISIS from NATO airbases on its territory, the Turkish government has supported other extremist groups, including Jabhat al-Nusra, in the Syrian Civil War.

While tolerating terrorists, Erdogan is destabilizing Turkey’s defenses. Following the failed coup, Erdogan’s government arrested almost half of its NATO-affiliated military officers, even though there was no evidence that they had supported the insurrection. This purge of the military has debilitated Turkey’s Air Force with the firing of more than three hundred of its officers and the grounding of five squadrons of F-16 fighters and about one hundred jet fighters.

Firing thousands of judges and police officers, predictably, has set back efforts to eradicate ISIS and other terrorists. In yet another threat to Turkey’s security apparatus, with its history of close ties to the West, Erdogan is creating a private, paramilitary force, known as SADAT, to protect his government against a potential intervention by the military.

Make no mistake: the major cause of instability in Turkey is Erdogan’s exploitation of religious, ethnic and social divisions. His ultimate goal: to turn an imperfect but traditionally secular democracy with a significant level of the rule of law into an authoritarian state with a strongman leader. In so doing, he has increased tensions between observant Muslims and secular modernists, the Sunni majority and the Alevi minority, as well as Turks and Kurds.

Although it accelerated after the coup, Erdogan’s polarizing power grab can be traced to his third election victory in 2011. Undermining the independence of institutions integral to a free society, he began to oust his opponents and replace them with party loyalists in the judiciary, the military, academia and the news media.

Indeed, a reporter who testified before my subcommittee, Kadri Gursel, was arrested, as was the owner of the prominent newspaper Zaman, Alaeddin Kaya. Turkey has become the world’s leading jailer of journalists, according to Reporters Without Borders, while the International Commission of Jurists reports that Turkey’s judiciary has become an instrument of retribution against critics of the government.

Now, in his latest step toward turning Turkey into an elected autocracy, Erdogan is pushing for an “executive presidency,” eliminating the few remaining checks and balances on his power.

With widespread wrongdoing in his government, increasing economic pressures and growing social tensions, Erdogan has sought to scapegoat a movement inspired by the teachings of a moderate Muslim cleric, Fethullah Gulen, who now lives in exile in Pennsylvania. Implausibly, Erdogan has blamed Gulen for the failed coup, as well as earlier investigations into government corruption.

In an extreme manifestation of Erdogan’s anti-Gulen paranoia, in October his government detained Andrew Brunson, an American Protestant clergyman, and his wife Norine. Mrs. Brunson has since been released while the pastor sits in prison, charged with “membership in an armed terrorist organization.” And what terrorist group might that be? The pacifist, Sufi-inspired followers of Gulen.

The United States must demand the immediate release of this American. And it should refuse to be bullied into extraditing Gulen for a show trial in Turkey. Instead, we should take strong steps to increase our leverage with the Erdogan government, urging it to align itself unequivocally with the West and the worldwide war on terrorism, while returning to the rule of law and restoring democratic institutions.

From containing communism to combatting terrorism, Turkey has been a valuable NATO ally for nearly sixty-five years. With forceful, forthright leadership, the United States can help Turkey turn away from backward-looking autocracy and toward Western-facing democracy.