Erdogan's Turkey is No American Ally 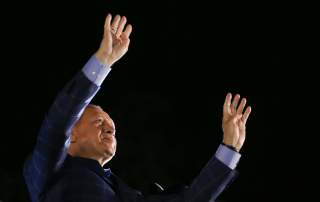 President Donald Trump’s about-face toward his Turkish counterpart Recep Tayyip Erdoğan is enough to give whiplash. Just five months ago, Trump was criticizing Turkey and undercutting its economy to bring Erdoğan to his knees over the imprisonment of Pastor Andrew Brunson. Behind-the-scenes, American officials and U.S. intelligence had grown exacerbated with Erdoğan for his enabling of the Islamic State as well as terrorist groups ranging from Hamas to Boko Haram. Now, of course, Erdoğan is Trump’s confidant and friend.

The irony of this about-face is the prickly Trump has absolutely no idea the disdain with which Erdoğan and the Turkish press view him. Erdoğan may be an enigma to many diplomats and analysts who do not want to believe the worst about him, but certain Turkish newspapers that are allowed to publish and have grown more prominent during Erdoğan’s reign provide a window into his mind. The reason is simple: any journalist who dares contradict what Erdoğan says or thinks is fired, imprisoned or worse. As columnist Zeynep Gurcanli observed in one of Turkey’s last secular newspapers, “The journalists who said that ‘the AKP’s Syrian policy is wrong’ have been externalized, marginalized, and fired.” In contrast, Erdoğan cheerleaders like İbrahim Karagül at Yeni Şafak, however, have only grown more prominent and, indeed, have found the doors to wealth and the highly-restricted Turkish airwaves open to them.

So what do these journalists say about the United States and Trump? While Washington may navel-gaze and assume all anti-American animus has to do with Trump, it’s important to recognize that Trump is not the cause of anti-Americanism in Turkey; it long predates him. According to the Pew Research Center’s annual surveys of anti-Americanism, Turks’ favorability toward the United States declined from around 50 percent in 1999 to just 30 percent in the wake of the 9/11 attacks, and that was before the U.S. war in Iraq. Those numbers have since plummeted.

When President Barack Obama ordered a drone strike in Yemen that killed Al Qaeda preacher Anwar al-Awlaki, preacher to three 9/11 hijackers and mentor to Fort Hood shooter Nidal Hassan, Yeni Şafak compared the U.S. president to Hitler. When Obama subsequently declared that the United States was not at war with Islam, Yeni Şafak called his statement an outright lie, and suggested that the United States sought to wage war against Islam since it had plotted the September 11, 2001, attacks and subsequently created the Islamic State. In 2017, Karagül, whose conspiracies won him promotion to editor of Yeni Şafak, spun one to suggest that every development in the Middle East since the 1991 Gulf War was actually a plot by the United States to destroy Islam.

But what about Erdoğan’s views toward Trump? Just a year ago, Karagül declared that “The United States is no longer a trustworthy country for Turkey. It is no partner, nor ally—it cannot be and will not be.” Because Erdoğan promises to defeat the Islamic State, it is essential to understand that he sees the Islamic State as a puppet of the United States or, as Yeni Şafak calls it, America’s “illegitimate child.” Such rhetoric isn’t just a one-time occasion, nor is it just the creation of Turkish newspapers; rather, it is a reflection of Erdoğan himself. At the height of the battle against the Islamic State, for example, it was Erdoğan himself who speculated to his political followers that the United States created the Islamic State in order to have an excuse both to intervene in the region and to further Islamophobia.

To defeat the Islamic State, in Erdoğan’s fevered mind, therefore, means defeating the United States. Even if Erdoğan’s believes that Trump’s about-face on Syria is a dream come true, those reflecting Erdoğan’s vision pity Trump because of his weakness. “Erdoğan has a stronger hand… because, Trump does not yet have control over the established system,” Karagül wrote in the wake of the 2017 summit between the two leaders. Hence, for the current Turkish regime, the United States cannot be trusted because it is a democracy. Nor should Erdoğan pay heed to a country which, contrary to Trump’s statements, Erdoğan’s followers see in decline. “The U.S. and the West are in a period of regress. The economic order they control is in a deadlock and can no longer move,” Yeni Şafak declared.

Trump may make concessions, and Erdoğan may pocket them, but none of that changes the fact that, in the worldview of Erdoğan and his team, the United States is “the primary threat for Turkey.” As Karagül explained, the clash between United States and Turkish interests is part of “a century-old showdown.” That Turkey is still shy of its one-hundred-year mark underscores how Erdoğan sees himself as representing global Islamism in a battle against Western liberalism. Trump himself can’t hope to change Turkish minds: when he spoke before the UN General Assembly, the pro-Erdoğan press called his ideas the epitome of “introversion” and “peevishness.”

Trump would not be the first leader to put all his eggs in Erdoğan’s basket. In 2012, Obama declared Erdoğan to be among the five international leaders to whom he felt closest, even talking about the advice he solicited about raising daughters from Turkey’s leader. By Obama’s second term, however, he learned what folly it was to trust Erdoğan. He recognized Erdoğan for what he was: a deeply corrupt ideologue dedicated to the destruction of the post-World War II liberal order, an enabler of terrorism and anti-Semitism.

Trump may feel leadership means defying conventional wisdom in Washington. Certainly, he is right to challenge much of that. But, with his embrace of Erdoğan, he not only wields power to a man complicit in the Islamic State’s rise and survival, but also a man whose closest circle ridicules Trump if not to his face than behind-his-back to his own people. In Washington, Trump may see it as creative disruption. In Ankara, however, they will call it the humiliation of America and its president.