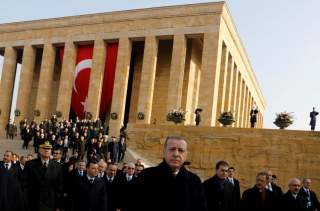 Turkey’s decision to launch an operation in Afrin in northern Syria has opened a new front and phase in the Syrian conflict. Ankara says its offensive alongside Syrian rebel allies is aimed at eliminating the Kurdish People’s Protection Units (YPG) control of the mountainous area around the city of Afrin that has been a mostly Kurdish-controlled enclave for five years. Ankara’s momentous decision will have aftershocks far beyond its immediate results. The thousands of Syrian rebels Turkey has recruited to fight alongside the operation are now being co-opted into a Turkish agenda that is mostly aimed at removing what Ankara views as a terrorist threat from its border. In addition the offensive is aimed at forcing the United States to choose sides between the YPG, which has been its partner against Islamic State for years, and Ankara, which has been a Washington ally since the 1950s.

On January 24 President Donald Trump spoke with Turkish president Recep Tayyip Erdogan and “relayed concerns that escalating violence in Afrin, Syria, risks undercutting our shared goals in Syria,” according to a White House statement. Trump urged Turkey to deescalate and limit its military action. However, Turkey is already deeply embroiled in a conflict in Afrin. The Turkish military claims it has killed 260 Kurdish YPG and ISIS fighters since January 20. It has carried out hundreds of airstrikes with F-16s. In addition Turkish tanks and ground forces were engaged along with up to twenty-five thousand Syrian rebels in the offensive. Can Turkey pull back after claiming it wanted to build a nineteen kilometers buffer zone inside Syria, which would involve taking most of Afrin? Either way its offensive has forever changed the map of Syria, putting Syrian rebels against Kurds in the first major clashes of the war, and risking a major break with Washington that has pitted the State Department against the Pentagon and ruffled feathers in the Trump administration. Secretary of Defense James Mattis told reporters in Indonesia that the Afrin battle “distracts from the international efforts to ensure the defeat of ISIS.”

On January 23 Turkish presidential spokesman Ibrahim Kalin told CNN that Turkey would only cooperate with Washington once the United States stopped supporting the YPG. “Then we can talk about the future of Syria,” Kalin said. His statements are part of a series of increasingly bellicose and stark statements from Ankara portraying the United States’ role in Syria as a threat. “A country we call an ally is insisting on forming a terror army on our borders. Our mission is to strangle it before it’s even born,” Turkish president Recep Tayyip Erdogan told reporters on January 15. Erdogan holds up a carrot-and-stick in this statement, both portraying Ankara as a victim, arguing that the United States could be allowed to work with Turkey again if Washington behaves, and also making threats. In a speech to municipal leaders in Ankara on January 24 Erdogan claimed that the Obama administration has broken promises to Turkey to keep the YPG, which Turkey refers to as “terrorists” east of the Euphrates. “We’ve done our part and they have not,” Erdogan said. “They promised they would send the terrorists in this area to the east of the Euphrates and leave Manbij to its rightful owners.”

For Turkey, the YPG is part of the Kurdistan Workers Party (PKK), which it has been fighting for decades. Since 2015, when a ceasefire broke down, there has been a major conflict in eastern Turkey. Meanwhile Ankara has watched as the YPG has grown in power in eastern Syria, defeating ISIS in Kobani with U.S. help in 2015 and defeating ISIS in battle after battle. For the Pentagon, which found the YPG valiant partners, this was not a terrorist group but liberators removing the stain of ISIS from Syria. In 2016 things became more complex when the YPG and the Syrian Democratic Forces, which were an umbrella group the United States and YPG had helped construct, crossed the Euphrates and took Manbij, a city twenty kilometers from Turkey. This prompted Ankara to intervene in Syria in August 2016. It attacked ISIS with the help of Syrian rebel allies and clearing ISIS from the border in an operation termed “Euphrates Shield.” Turkey said it was fighting “terrorists,” by which it meant ISIS and the YPG.

Euphrates Shield was designed to keep the YPG from advancing west towards Afrin, where the YPG controlled a canton that was ringed by the Turkish border and Syrian rebel groups. In the summer and fall of 2017, Turkey made further threats to intervene in Afrin, but hesitated. Meanwhile the United States and the SDF liberated Raqqa from ISIS and Ankara watched as the U.S.-led coalition released statements saying they were beginning to “stabilize” eastern Syria. Coalition spokesman Col. Ryan Dillon said in mid-January that the United States was looking to train a force of up to thirty thousand in eastern Syria. Turkish media immediately accused the United States of building a “PKK/PYD-led army” in Syria. The PYD is the political wing of the YPG. The controversy over the stabilization efforts led to a rift between Secretary of State Rex Tillerson and the coalition. After meeting Turkish foreign minister Mevlut Causoglu in Vancouver on the sidelines of a discussion about the crises on the Korean Peninsula, Tillerson claimed that the “entire situation has been misportrayed, misdescribed” and that “some people misspoke.” Tillerson refused to mention Kurds or the YPG in a speech at the Hoover institute on January 17. Two days after Turkey’s offensive the State Department’s Heather Nauert said the United States understood Turkey’s “legitimate security concerns.” The State Department’s line is closer to that taken by the UK and NATO. UK foreign secretary Boris Johnson has also supported Turkey’s “right to want to keep its border secure.”

The U.S. administration has mixed messages that reveal a lack of policy. U.S. officials said there was a difference between “allies and partners,” but this semantics hasn’t prevented the Turkish operation or prevented Kurds who fought ISIS alongside the United States feeling betrayed. Erdogan has upped his rhetoric. Daily Sabah reported on January 24 that “Turkey will first exterminate the terrorists in Afrin and then make the region livable again, all for the 3.5 million Syrians we are currently hosting.” This comment and others about operations against Manbij, which is where the United States and Turkey almost clashed in March 2017, reveal much larger plans.

For Syrian rebels these larger plans present a double-edged sword. On the one hand Turkey has been a conduit and host for the Syrian opposition. Since 2015 Turkey has cultivated certain rebel groups, such as Faylaq al-Sham, the Sham legion. In the fall of 2017 when Turkey sent forces into Syria’s Idlib, they had to navigate a mosaic of rebel groups including Tahrir al-Sham which includes former Al Qaeda affiliates. Turkey has also worked closely with Turkmen groups in Syria which have hailed the latest operation. Now these groups are being told the goal is to aim their rifles at Afrin and not Damascus.

“One should not think Afrin is the last target. On the contrary, it is the beginning. The next stages of the anti-YPG fight will enter the pipelines only after Afrin is fully cleared. It is believes that the Afrin operation could take around five or six months,” writes Serkan Demirtas at the Turkish daily Hurriyet. That means what remains of the Syrian rebel groups in northern Syria, who hold the largest opposition stronghold free from the Syrian regime, are now increasingly intermingled with Turkey’s current goals. Becoming clients of Ankara means they now focus on Kurdish YPG rather than fighting the regime. Turkey’s relations with Russia now complicate its former support for the rebels against the Syrian regime.

Turkey held numerous discussions with Russia before the Afrin offensive. The official details of those discussions are vague but Russia, which is the closest ally of Damascus, has not harshly condemned the Afrin offensive.The Syrian regime which threatened to shoot down warplanes over Afrin before January 20 has also not responded harshly. By contrast both Russia and Syria condemned the U.S. coalition’s comments about training a large stabilization force in eastern Syria.

Russia, Turkey and Iran have been meeting in Astana and Sochi and there are open lines of communication between them and Syria. The Afrin offensive therefore appears to be cementing a Russia-Turkey-Syria understanding where the YPG is being targeted not only because Ankara views it as terrorists but also because the Syrian regime and Russia view it as too close to the United States. The U.S. coalition has said that Afrin is outside its area of operations, which leaves the YPG there by itself against an awesome array of enemies. Whatever happens in Afrin therefore means that the aftershocks will be felt among the Syrian rebels and the United States.

What's the long-term implication of this? It creates a potentially contentious relationship between Turkey and the rebels that could cause Ankara problems if Turkey appears to have sold them out to the Syrian regime later or if Afrin does not go well. Claims that Syrian refugees could be resettled in Afrin would mean demographic change, and if their hopes for resettlement do not pan out, then they may react. Also it forces the United States to accelerate processes such as increased development finance from U.S. AID to Raqqa and to move away from the YPG towards more Arab portions of the SDF “stabilization” force. The Afrin offensive marks a major new phase of the Syrian conflict, likely bookending the conflict with ISIS and the civil war in general.