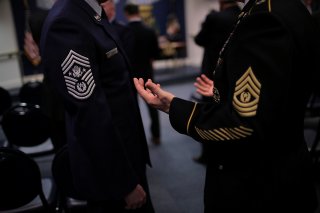 The politicization of many retired military officers is a sign that the healthy American tradition of a professional military officer corps is breaking down. For decades, the elite members of the officer corps generally avoided politics unless they were voicing their opinion on military matters as part of the normal political process of deciding national security policy. In recent years, however, retired senior officers have seen fit to voice their opinions on a host of partisan and divisive issues, placing civilian-military relations into uncharted waters.

The U.S. Constitution contains many provisions that have stood the test of time. There seems little doubt, for example, that the separation of powers doctrine, when properly enforced, is one of the bulwarks of liberty. One aspect of the Constitution, however, that achieved obsolescence in the nineteenth century were its provisions on civilian-military relations. As Samuel Huntington has pointed out, the Framers of the American Constitution did not envision the need for strong constitutional provisions for “civilian control of the military” because the military was not a professional force but a militia, composed entirely of civilians. When the nation needed to conduct military actions, prominent civilians would be installed as officers, and the militia would be called up from the civilian population. Early in the life of the Republic, it would not have been considered odd if the president, as Commander-in-Chief, were to have accepted military command of a unit in battle. The military were civilians, so there was no need to clarify a chain of command.

The result of this constitutional omission is that, while the president is Commander-in-Chief and the Congress can structure and fund the armed forces, there is no clear provision establishing “civilian control” of the military, even though both Article I and Article II imply some congressional and executive oversight of the military. This is because the Framers of the Constitution did not envision the rise of a highly professional military and a huge standing army.

However, as the national security apparatus grew, the United States did develop a salutary political tradition that the professional military, especially the elite officer corps, would eschew partisan politics and stay safely in their lane by providing honest advice to the civilian leadership on how to protect the nation. This tradition was a healthy one because, historically, from Imperial Roman to Napoleon, when professional military officers become politically active, republics tend not to survive.

We should concede that senior military officers must, to some degree, become involved in politics as they report to both the president and the Congress, two separate branches of government that do not always agree on national security issues. Therefore, the officer corps must make political judgments about securing the best policies in a government that may be divided. So, for example, if the Chairman of the Joint Chiefs is testifying in front of Congress, how frank should he be in voicing his concerns about a provision in the president’s proposed defense budget request? This is a political judgment that must be exercised by the military.

Yet, the best American military leaders seem to have met this challenge by avoiding any hint of partisanship and giving all questioners their frank and honest judgments on national security issues. This healthy political tradition was embodied best in General George C. Marshall who, when asked his political affiliation, often replied that his father was a Democrat, his mother was a Republican, and “I am an Episcopalian.”

Wait a minute, you say, have not former generals run for the Presidency and, by definition, become involved in partisan politics? This is undoubtedly true, but there is a difference between war heroes, such as Eisenhower or Grant, who were drafted to run for office by acclamation because of their success on the battlefield versus military officers and former officers who scheme in favor or against politicians in the same way political operatives would. Moreover, in the past, many former officers were drawn into politics, such as Douglas MacArthur and George McClellan, because they had specific criticisms of the president’s military policies.

America is now developing a politicized officer corps, one that is becoming involved in partisan politics in the way that rank political operatives would. The concern about politicized military elites has come from both the left and the right. Jim Golby, a former defense official and advisor to then-Vice President Biden, wrote a thoughtful piece in Foreign Policy expressing concern about previous senior military leaders who had become involved in partisan politics, such as: former Joint Chiefs Chairman William Crowe who endorsed Bill Clinton’s election; former Marine General John Allen who criticized Donald Trump during a speech at the Democratic Convention; and, former General Michael Flynn who led chants of “lock her up” against Hillary Clinton. What prompted Golby’s concern was Joint Chiefs Chairman Mark Milley’s appearance at a Trump photo op in front of St. John’s Episcopal Church in which Trump seemed to be taking a political victory lap against violent protestors who had occupied Lafayette Park the night before. (Milley has since apologized.)

Golby points out that it has become quite commonplace in American politics for former flag officers “to publicly criticize the President of the United States,” sometimes as “analysts” on cable news shows. Golby’s concerns cannot be characterized as mere anecdotes as one can cite retired Army Vice Chief of Staff Gen. Peter Chiarelli who organized a letter signed by 780 retired high-ranking officers, including 22 retired four-star generals and admirals, that criticized then-President Trump and endorsed Joe Biden.

On the right, pro-Trump conservatives have pointed to the egregious conduct of retired General Stanley McChrystal who not only publicly endorsed Biden on Morning Joe, but was paid to deploy an Artificial Intelligence technology, developed to target terrorists, that was used to blunt candidate Trump’s messaging. McChrystal even compared Trump supporters to Klansmen and Al Qaeda.

Some on the right point can even point to active-duty officers, such as Lt. Col. Alexander Vindman, who schemed with highly partisan advocates for Trump’s impeachment while he was serving on the president’s National Security Council staff. And, in a full-frontal political assault on Trump, in 2019, former Admiral William McCraven made the ludicrous assertion that Trump was a greater threat to America’s national security than terrorist groups; McCraven’s criticism can only be considered a partisan attack, not a serious statement of his national security policy concerns.

As with the now-discarded tradition that former presidents should generally avoid partisan politics, it is now clear that a certain professional culture that had previously been embraced by military leaders is also breaking down. For George Marshall, it was always understood that choosing a military career meant keeping silent on your political views and offering, to the greatest degree possible, only your best military judgment.

There is something troubling about the current culture of America’s elite officer corps, not simply in their politicization but also in their now routine acceptance of a revolving door onto the boards of defense contractors, security companies, and others vying for government contracts. The healthy tradition of a separate and professional officer corps who would give their unvarnished and unbiased opinions to America’s civilian leaders is breaking down; many retired military leaders are now both partisan and display huge financial conflicts of interest.

William S. Smith is Senior Research Fellow and Managing Director of the Center for the Study of Statesmanship at The Catholic University of America. His recent book is Democracy and Imperialism from the University of Michigan Press.