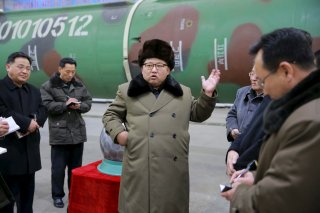 In response to North Korea leader Kim Jong-un’s threat to target Guam with missiles, President Trump said that North Korea had better “get their act together or they’re gonna be in trouble like few nations have ever been in trouble in this world.” What military actions he had in mind are uncertain. Though U.S. conventional forces are considered a given by most of America’s foreign-policy elite, what is uncertain is how effective those forces would be if called upon to fight a major regional contingency in Korea. It’s not the slam-dunk scenario that you might think.

Washington has been lulled into a false sense of security over the past thirty years. It believes that the U.S. military is guaranteed victory against any adversary anywhere in the world. I can attest, through four combat deployments in my twenty-one-year Army career, the U.S. Armed Forces are indeed the most technologically advanced, professional and capable force on the planet today.

Contrary to popular belief, however, the United States is not impervious to defeat. That reality should never be far from the president’s mind as he considers issues of war and peace.

I fought on the frontlines with the Second U.S. Cavalry in 1991’s Desert Storm at the biggest tank fight of the war, the Battle of 73 Easting. The tank-heavy U.S. VII Corps, including 140,000 highly trained and equipped soldiers, routed Saddam Hussein’s forces in a one-hundred-hour campaign. Before heaping too much praise on us, however, Americans must realize that the 1991 Iraqi military we defeated effectively had no air force, no navy and only antiquated, easily defeated air defenses.

Though they did have thousands of artillery pieces and tanks, their equipment was in such a poor state of readiness and the crews hopelessly untrained. Saddam’s forces literally never had a chance. When the United States next fought a large-scale conventional war in Iraq in 2003, Saddam’s troops were still reeling from their devastating losses in 1991. In fact, his forces had deteriorated even further in the intervening twelve years, owing to crippling sanctions. They were barely able to slow down U.S. armored troops.

Were the United States to fight against North Korea today, it would have nowhere near the overmatch many experts claim.

First, since the 2003 invasion of Iraq, the U.S. Armed Forces have focused the majority of their efforts on low-level counterinsurgency (COIN) warfare. As a result, over the past fourteen years U.S. tank crews have had precious little training time in their Abrams tanks, artillerymen have had limited opportunities to become proficient at their craft, and though many pilots have logged thousands of combat hours, they have done so against an enemy that has absolutely no air defenses nor air force with which to threaten them. The navy has not seen a major naval battle since the Vietnam War.

Were the president to order military action against North Korea that precipitated an all-out war, it would likely involve U.S. land, air and sea forces. While Kim’s military is far less technologically capable than the U.S. military, it nevertheless possess substantial artillery guns, thousands of ballistic missiles, a million-man army, and a formidable and large special operations force.

The one area where North Korea’s forces would have an important advantage over U.S. forces is that those forces would be fighting in North Korea. Over the past ten years, while the United States has been conducting COIN operations, North Korea’s soldiers have trained exclusively for a conventional fight against U.S. and South Korean forces. While it is a virtual certainty that the U.S.-South Korean force would win any protracted war—so long as China stays out, that is—American troops could well suffer more casualties than the United States would likely tolerate.

Moreover, as China’s state-run, semi-official mouthpiece the Global Times reported on Friday, if war broke out in North Korea because of an American attack, then the far more modern and lethal Chinese Army might intervene. “If the US and South Korea carry out strikes and try to overthrow the North Korean regime and change the political pattern of the Korean peninsula, China will prevent them from doing so,” the Chinese daily ominously warned. But are the long-term risks to American security posed by North Korea worth the risk of fighting the Chinese?

As has been the case since 1953, three successive generations of the Kim dynasty have shown they have one overriding imperative: regime survival. The thought that Kim Jong-un would someday order a nuclear strike against U.S. territory when it is a 100 percent certain that the United States would annihilate the regime in response, is illogical in the extreme.

Some in Washington, however, seem to be of the opinion that it is better to take out Kim now rather than wait until some point in the future when he might, as an act of desperation, launch a nuclear missile at the United States. Going to war now as an “insurance policy” against that possibility is a dangerous, reckless and immoral idea. While it strains credulity to consider that Kim would ever order a suicidal attack, the prospect that China would go to war with the United States on the Korean Peninsula if the United States were to strike is virtually guaranteed.

What the administration should do first is recognize that North Korea represents no genuine threat to American security. Second, the administration should stop giving Kim credibility and an international stage on which to play his game and engage, tit-for-tat, in escalating rhetoric. Third, administration officials should continue to work behind the scenes with China, Japan and South Korea to keep North Korea isolated and impotent. China sent a powerful signal on Friday when it publicly told the Kim regime that if it started a fight, China would remain neutral. How much better to secure vital U.S. national interests than to have a situation where the United States not only doesn’t have to fight China, but could see them instead do some of the fighting for us? Lastly, the president should take advantage of the fact that there is currently no threat of an adversary launching a major war against the United States and commit to rebuilding the strength of the U.S. Armed Forces so that if those forces are needed in the future, they will be ready to effectively defend the country.

A present-day war against North Korea would harm American interests under the best of circumstances, and if things went poorly, then that war could cause egregious harm. Let us step back from the brink of war and let deterrence and regional diplomacy work.

Daniel L. Davis is a senior fellow for Defense Priorities and a former Lt. Col. in the U.S. Army who retired in 2015 after twenty-one years, including four combat deployments. Follow him at @DanielLDavis1.