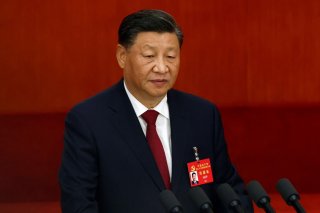 Chinese Communist Party (CCP) General Secretary Xi Jinping’s opening speech at the 20th National Congress maintained the continuity of his existing vision and offered no remarkable surprises. Compared to the widely expected norm-breaking third term for Xi, the only break from tradition was relatively superficial as the Chinese leader read an abridged version of the report. Perhaps he was cognizant of the retired party elders in attendance or, as some have conjectured, wanted to make a show of strength. A shorter summary, therefore, delineated his success in achieving factional consensus.

Amid the sprawling achievements, the few “shortcomings” that Xi listed mainly encompassed imbalances in economic development; food, energy, technological, and economic security drawbacks; ideological lacunae, including a lack of faith in socialism with Chinese characteristics; and corruption. These broad categories reinforce Xi’s security paradigm, where all challenges are treated as a matter of national security and ideology reigns supreme. Xi’s report formulated it in unambiguous terms: “People’s security as our ultimate goal, political security as our fundamental task, economic security as our foundation, military, technological, cultural, and social security as important pillars, and international security as a support.” Thus, the key features of this report should be seen through the lens of the paradigm of security. Considering that the 2022 report is an extension of plans already underway for modernization and rejuvenation, what special significance does it hold for the future of Xi, the CCP, and China?

Beyond Mao: Setting the Stage for Xi’s Preeminence

Expectedly, the mainstay of the report described the CCP’s achievements in pursuing China’s dramatic transformation since Xi came into power a decade ago. The augmented emphasis on Xi’s past two terms as the foundation of China’s continued progress underpinned his logic for staying in power as much as his intention to see through his ultimate goal of “irreversible” national rejuvenation.

Xi has already proclaimed the completion of the first centenary goal, namely, achieving a moderately prosperous society, and reiterated the previously outlined two-step strategic plan (2020-2035 and 2035-2049) to transform China into a great modern socialist country—the second centenary goal. The coming years will therefore witness redoubled efforts toward the latter goal. A large part of this will include the “new era” military endeavors, which will align with the People’s Liberation Army (PLA) modernization goal to be achieved within the next five years.

The lack of a succession road map, let alone the peaceful transfer of power, coupled with Xi’s determined and triumphant tone made it evident that he will remain China’s leader until he is satisfied that Mao Zedong’s legacy has been eclipsed. The cost of Xi’s inflated personal ambitions will be borne by the CCP, which is already institutionally impaired due to the over-centralization of power and Xi’s propensity to tolerate only abject loyalists and punish skeptics.

Despite paying lip service to economic reform and opening, the common refrain was economic, military, and political-ideological transformation. Moreover, the overarching principle of the “new era” is “Xi Jinping Thought,” which adapts Marxism to the Chinese context. Its adherence has become the litmus test for loyalty to Xi.

In the economic domain, a shift to greater state control is clearly evident through the recent crackdown on big businesses and its inward-looking policies. For example, China’s fourteenth five-year plan (2021-2025) prioritizes an “internal cycle” over “internationalization” of the domestic economy to reduce dependence on foreign technology. This aligned with the report’s emphasis on building self-reliance in science and technology.

Given that the Chinese economy is struggling and foreign investors are finding it difficult to sustain their faith in China’s markets due to its systemic problems, the report’s near white-washing of such concerns will only worsen Beijing’s shaky credibility.

Similarly, the report did touch upon the need to boost birth rates, as well as improve access to employment and housing, However, Xi’s bold tone belied the mounting scope of these concerns without acknowledging the consequences of his messy domestic governance model.

The Belt and Road Initiative (BRI) was still framed as a collaborative endeavor for not just enhancing investment but procuring public goods, notably as a tool of its “opening up” strategy both regionally and globally. Hence, one can expect the accelerated development of trade ports and corridors with BRI partners, although, in view of China’s slow economic growth and the global trend toward protectionism, China will likely “retool” the scope of the BRI as well.

The report resolutely defended the harsh “dynamic zero COVID” policy, which has not only caused domestic resentment but also adversely impacted the national economy as a “people-centered” approach to further socio-economic development. But the lack of empathy and thrust on hardline measures is in tune with Xi’s overall defensive tone and strongman leadership style.

One core component of the report was the emphasis on the “one country, two systems” approach. The dismantling of Hong Kong’s autonomy, presented as a celebratory example of China’s jurisdiction of special administrative regions, is indeed a cautionary tale for Taiwan and other restive regions like Xinjiang and Tibet. The content on Taiwan reunification was updated to include the events surrounding the emerging fourth Taiwan Strait crisis; the language is decidedly harsher compared to the 19th National Congress report. The inclusion of the phrase “use of force” as an alternative to peaceful reunification, specifically as a response to what China considers U.S. (“external”) interference in internal affairs, is a grim warning for Taiwan’s democratic future with ramifications for the entire Indo-Pacific.

Xi’s emphasis on winning local wars by intensifying military training under combat conditions and regularly deploying forces in diverse ways should alert neighbors like India and Japan, which have ongoing territorial disputes with China. In contrast to the previous report where the Central Military Commission (CMC) assumed “overall leadership,” Xi categorically stated that the buck rests with the CMC chairman, or Xi himself. This further highlighted the Chinese leader’s personalized control over the military. His military rhetoric also laid bare the cooperative global development agenda (e.g., the five principles of peaceful coexistence) that denies any hegemonic and expansionist ambitions.

Even as the speech focused on domestic concerns, international and regional outreach has been a mainstay of Xi’s narrative and was a point of reference for illustrating China’s successful implementation of its “major power diplomacy.” His celebration of China’s “international influence, appeal, and power” in reshaping the world order highlighted the continuation of China’s aggressive foreign policy and its congruence with rogue states like Russia. Naturally, the repercussions of such a policy on deteriorating relations with both regional powers and the West were conveniently ignored.

Thus, the overall address reflected Xi’s strongman image in that it repeatedly emphasized security and development by stressing the threat of “dangerous storms” while preparing for “worst-case scenarios.” Moreover, his work report did not acknowledge any governance weaknesses. Instead, it laid the blame for “risks and tests at home and abroad” squarely on the transition period of China’s modernization drive toward a rejuvenated socialist country and the tumultuous international landscape, covering wide-ranging trends ranging from anti-China U.S.-led blocs affecting regional disturbances to unprecedented technological changes causing a shift in the global balance of power. For Xi, technological trends earmark China’s impending triumph (cashing in on “strategic opportunities”) over the weakening U.S.-led world order in the turbulent and changing “new period.” However, Xi’s power-adulterated vision that has already dented economic and political party-state institutional authority is likely to dampen China’s thus-far sweltering rise.

Dr. Jagannath Panda is a Contributing Editor for the National Interest. Currently, he is the Head of the Stockholm Centre for South Asian and Indo-Pacific Affairs (SCSA-IPA) at the Institute for Security and Development Policy (ISDP), Sweden, and a Senior Fellow at The Hague Centre for Strategic Studies (HCSS), The Netherlands. Dr. Panda is the author of China’s Path to Power: Party, Military and the Politics of State Transition (IDSA and Pentagon Press: 2010), and India-China Relations (Routledge, 2016), and the co-editor of Chinese Politics and Foreign Policy under Xi Jinping: The Future of Political Trajectory (Routledge, 2020).