Europe Shouldn’t Rely on Algeria for Its Energy Needs 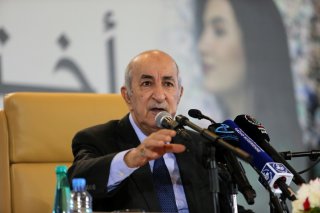 For a country that is not overly salient in mainstream Western media, Algeria has drawn the attention of the United States, and not necessarily for the right reasons. Namely, its relationships with Iran and, more importantly, Russia is a growing cause for concern. As Algeria’s ties with Russia and Iran grow, there is increasing apprehension in the West, so much so that in April 2022, Secretary of State Antony Blinken visited Algeria to address Algeria’s relationship with Russia.

Unfortunately, Blinken’s attempts to lure Algeria away from Russia have fallen on deaf ears. Last month, Algiers and Moscow conducted joint military exercises in the Mediterranean Sea, much to the chagrin of the United States. In December, President Abdelmadjid Tebboune is expected to sign an arms deal worth over $12 billion during a visit to Moscow. This meeting comes after Rep. Lisa McClain (R-MI) wrote a letter to Blinken demanding the United States levy sanctions on Algeria for purchasing Russian arms last year—a clear violation of the Countering America’s Adversaries Through Sanctions Act. The decision in the face of sanctions is an even stronger barometer of Algeria’s global orientation.

The timing of this enhanced cooperation is by no means incidental. Algeria remains one of the most important clients of Russia’s military industries and is poised to become the African country with the most military spending. Simultaneously, Algiers is gaining importance in Southern Europe because of its natural gas supplies. The North African country is on pace to become the biggest gas supplier to Italy in 2023, a fact well-known to Russia. Russian foreign minister Sergey Lavrov recently discussed economic issues, including gas supply to the European Union (EU), with his Algerian counterpart Ramtane Lamamra. By strengthening its relationship with Algeria, Russia may be able to cause Algiers to weaponize its gas supplies, as it has in the past, and wreak further havoc on the European energy grid and natural gas prices.

The arms deal expected to be announced next month is the continuation of Algeria’s love affair with Russia. Algeria’s military overwhelmingly relies on Soviet and Russian weapons, including aircraft, tanks, and missiles. Russian military news outlet Armeyskiy Standard depicts Algeria’s army as being built based on the “Russian Model.” Though the future of Russian military exports is murky because of Russian losses in Ukraine, it is unlikely that either side will back away from the upcoming military transaction.

Last year, the two countries signed an arms deal worth $7 billion. In May, Algiers and Moscow were preparing an updated text for their strategic partnership, renewing their treaty written in 2002. Algeria’s ambassador to Russia, Smail Benamara, said that the treaty is supposed to expand military cooperation beyond the purchase of Russian arms. The cooperation also includes joint military drills and intelligence exchanges. A Russian-Algerian military exercise was conducted in Russia’s North Ossetia region in October 2021 and another one last month in the Mediterranean.

This month, a joint military exercise dubbed “Desert Shield 2022” took place between November 16-28. The exercise was held at the Hammaguir testing ground in Bechar Province near Algeria’s border with Morocco. The location of the drill is highly symbolic as well, as Algeria flexes its muscles against its neighbor. Russia, for its part, claims that the planned exercises with Algeria are a “routine activity that’s not directed against third parties.” Nevertheless, observers in the West can only watch in apprehension as Russia knocks at Southern Europe’s doorstep.

Algeria’s Gas Supplies as a Weapon

Against the backdrop of the Russian invasion of Ukraine, Algeria is positioned to become an essential gas supplier to Europe. Algiers supplies almost 49 percent of the imported gas to Spain, flowing through two pipelines, Medgaz and GME (Gazoduc Maghreb Europe), with the latter partly situated on Moroccan soil. In July 2022, the Algerian gas giant Sonatrach signed a $4 billion oil and gas production-sharing contract with two European hydrocarbon companies, ENI (Italy) and Total (France). Sonatrach is a state-owned company, lending credence to the idea that the Algerian regime could use the national gas company as a geopolitical tool, exactly as the Russian regime is doing with Russian energy companies.

There is precedence for such a maneuver. The Algerian government has previously exploited Spain’s dependence on the Algerian gas supply to punish Spain for its rapprochement with Morocco. When the Spanish prime minister Pedro Sanchez decided to support Morocco’s autonomy plan for Western Sahara, Algeria recalled its ambassador from Spain, and Sonatrach announced a hike in the prices of gas to Spain.

With the invasion of Ukraine and the disruption of the Nord-Stream natural gas pipeline, the diversification of the energy supply has become an issue of strategic importance for the EU and the US. The idea that the EU intends to mitigate its dependence on Russian energy only to increase the reliance on the most significant Russian ally in North Africa seems counterproductive. The EU’s dependence on Algeria only gives Russia further leverage over gas prices and energy supplies on the continent, which the EU avoided at all costs.

Since gaining independence from France in 1962, Algeria has been ruled by a junta of generals. Today, it remains a dictatorship with a corrupt and inefficient economy, denying liberties to its citizens and flouting human rights. Despite the shortage of basic necessities for its citizens, Algiers spends billions of dollars on Russian weapons.

Furthermore, Algeria’s ties with Iran and Polisario are growing. According to Iranian general Yihya Safavi, twenty-two countries, including Algeria, are interested in purchasing Iranian drones—the same drones that gained notoriety due to their use by the Russian military against Ukraine’s civilian population. Similarly, Algeria backs and arms the Polisario, which receives support from other malignant actors, and its leaders announced that they would also soon receive Iranian drones.

Whether Algeria will buy Iranian drones for the Polisario or itself is still being determined. What matters is that Algeria will receive them first. Algeria may be interested in drones due to their increasing importance on the battlefield. However, Algeria’s ties to Russia impede its abilities because Russia cannot manufacture drones and instead purchases them from Iran. As a result, Iran is the only country that can supply Algeria with drones, allowing for a growing partnership that should further worry Europe, Morocco, and the United States.

Algeria maintains warm relations with Russia and Iran, both of which are sanctioned by the international community. Unfortunately, these ties will exponentially grow in Russia’s case. The arms deals, which are continuous and increasing in size, are just the basis of cooperation. With military exercises and intelligence exchanges, Russia will solidify another front from which to target Europe. With Algiers’ relationship with Iran and the Polisario, Europe suddenly needs to keep its eyes open on its southern neighbor.

Besides the physical threat that Algeria may pose, Algeria’s natural gas supplies provide another tool in its arsenal. Algeria has already weaponized its gas supplies and can undoubtedly do it again. The notion that Europe should turn to Algeria, a Russian ally, in its moment of weakness is counterproductive and even dangerous. It’s time the United States and Europe recognize what Algeria stands for, take necessary precautions against its global orientation, and levy sanctions as should already be done under U.S. law.

Alex Grinberg is an Israel-based Middle East analyst with a focus on Iran He speaks fluent Persian, Arabic, Russian and French.