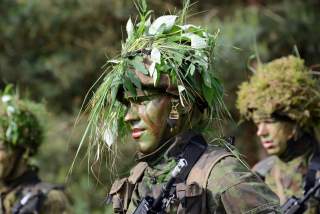 The Treaty of Lisbon, which came into effect in 2009, introduced the “Permanent Structured Cooperation,” also known as PESCO, as a “specific CSDP flexibility mechanism,” for EU member states to increase their defense cooperation and mutual-security commitments. Article 42(6) of the Treaty on the European Union now states that “Those Member States whose military capabilities fulfil higher criteria and which have made more binding commitments to one another in this area with a view to the most demanding missions shall establish permanent structured cooperation within the Union framework.” The permanent structured cooperation clause allows for differentiated integration on military and defense matters among EU member states. In other words, it allows for a cluster of EU states to create a common-defense policy.

Until 2017, the PESCO was never invoked. However, significant geopolitical shakeups—such as the Russian provocations in Eastern Europe, the Trump administration’s ambiguous position toward NATO, and Brexit, to name just a few—have given new impetus to the idea of a Common Security and Defense Policy. In the wake of these developments, the European Union’s foreign ministers agreed on September 7, 2017, to move ahead with PESCO and to officially launch it by the end of 2017. On December 11, 2017, the Council of the European Union officially established PESCO with the participation of twenty-five member states.

On February 17, 2018, at the Munich Security Conference, one of the highest profile international security conferences, Jean-Claude Juncker, the president of the European Commission, voiced his support for PESCO. He called for more European presence on the world stage, arguing for a greater role of the EU in international affairs. Juncker stated that: “[s]oft power is not powerful enough. We need more strength in foreign, security and defence matters.” German foreign minister Sigmar Gabriel also endorsed the idea of increasing European defense cooperation to counter Russian and Chinese assertiveness. He called for a “European moment” in the face of what he sees as Donald Trump turning his back on transatlantic-security cooperation.

The idea of permanent structured cooperation did not find universal approval. Last November, American officials argued that the European NATO allies should spend more on their defense through the PESCO agreement. However, more recently, U.S. officials have voiced concern that PESCO threatens NATO cohesiveness, and will diminish U.S. influence in Europe: “We are supportive of it, as long as it is complementary to and not distracting from NATO’s activities and requirements,” Katie Wheelbarger, a top aide to Secretary of Defense James Mattis, said.
The efforts of European member states to create a more integrated defense are not new. The U.S. ambivalence towards EU military integration is not new either.

European efforts to integrate military started in October 1950 with the proposal of creating a European Defense Community. After the Cold War, the most significant development on matters of European security was the Saint-Malo initiative (1998) which stated that “the union [the European Union] must have the capacity for autonomous action backed up by credible military forces.” However, America, which has called upon its European allies to do more burden-sharing, almost since the inception of NATO, was not exactly happy with the Saint-Malo initiative. Former Secretary of State Madeleine Albright immediately countered with her famous “three –D’s” giving guarded support to the project on condition that there was no Decoupling, no Duplication, and no Discrimination in NATO. At the 2018 Munich Security Conference, Washington’s reaction was very similar.

In 2000, Lord Robertson, former secretary general of NATO, summed up Washington’s fear of European defense initiatives in an interview with the Washington Post: “The U.S. suffers from a sort of schizophrenia. On one hand, the Americans say ‘You Europeans have got to carry more of the burden’ and when the Europeans say, ‘ok, we will carry more of the burden,’ the Americans say, ‘Well, wait a minute, are you trying to tell us to go home?”

Along the same lines, in April 29, 2003, the governments of France, Germany, Belgium and Luxembourg came together at Tervuren (Belgium) to push for EU military planning and command structures, separate and independent from the U.S.-led NATO alliance. They pursued treaty provisions for “structured cooperation” on defense which would allow small groups of EU nations to forge ahead with military integration, regardless of other EU member states’ opinions.

After EU member states agreed to a modified Tervuren proposal, former Belgian foreign minister Louis Michel noted that the agreement was just the starting point: “We can say that the embryo of a European defense is under way and that it’s an irreversible process.” Former Italian foreign minister Franco Frattini stated: “I am sure you can appreciate how big a step forward this has been.” However, a NATO diplomat described the establishment of a EU planning cell outside SHAPE as a “Trojan Horse,” adding: “You start with 30 people in a planning cell, and end up with 300. It’s a bridgehead to something much bigger.” And Sir David Manning, Britain’s former ambassador to the United States, reported back to the foreign office that “The chocolate summit [the Tervuren summit] reflected the worst fears of U.S. hardliners about the dangers of ESDP [the predecessor to the EU’s Common Security and Defense Policy] going off in a NATO-incompatible direction.”

Once again, policymakers in Washington are confronted with a dilemma: if they want to achieve more effective burden-sharing and an increase in European defense spending, then they will have to support PESCO, a move that many Americans see as rivaling NATO, and therefore diminishing U.S. influence on the continent. Should the United States prefer to maintain its current levels of influence and discourage PESCO, it will face the problems of low levels of defense spending for the foreseeable future. The 2018 Munich Security conference perfectly illustrates this point. Once again, there is nothing new on the Western Front.