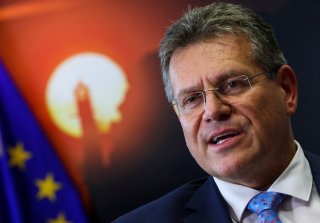 This month’s Northern Ireland Assembly elections were shocking, even though they were not surprising.

The nationalists of Sinn Fein had polled increasingly well since Britain voted to leave the European Union in 2016. Compared to the last assembly election, however, its votes have barely increased. The main unionist party, the Democratic Unionists (DUP), has meanwhile lost popular support—in part because it propped up a minority Conservative administration several years ago, in part because of the wear and tear of government. This has all been made more difficult because of the political climate across the island of Ireland.

That is why Sinn Fein has finished in first place, and now looks poised to introduce major political disruption to the system of power-sharing in Belfast. It was always perilous, and was several times dissolved. But this is the greatest ever challenge to peaceful self-government in Northern Ireland since the Good Friday Agreement.

This arrangement was always meant to be temporary. Every side has claimed that it is both unsatisfactory and a real threat to economic prosperity and political harmony in Northern Ireland. Yet it persists, in no small part because of European Union inflexibility.

One gets the impression that for the European Union, the fate of Northern Ireland has always been as much about causing the UK diplomatic discomfort as it has been about attempting to honor the Good Friday Agreement and secure prosperity and development for Northern Ireland.

Numerous gambits in negotiation have been tried to alleviate the Protocol’s worst effects. The UK has been engaging with the EU on this precise point for a long time. Article 16 of the Protocol allows for its termination if one party declares it has utterly failed. On the United Kingdom side, the Protocol has long been considered a failure.

Since July 2021 when the UK declared that the threshold to trigger Article 16 had been reached, the Protocol has been entirely sustained by British good faith. Yet ever since, there has been no sign of movement and Maroš Šefčovič, the European Commission’s vice president for interinstitutional relations has repeatedly said that he has no mandate to renegotiate the Protocol. The effect is not cooperation—It is an unhappy stalemate.

The UK still wants a solution, one to be worked out in dialogue with the EU. One is not forthcoming. The UK cannot stand by and do nothing forever, with Northern Ireland in the sort of turmoil last week’s election has brought.

Many companies which operate from Great Britain have publicly declared their unwillingness to supply Northern Ireland because of restricted movement of goods—within a sovereign state—because of the costs of paperwork levied by an outside bloc.

The Protocol itself is also a source of contention within Northern Ireland politics. The DUP, which had no power to affect the EU’s bargaining, could only say in increasingly dire tones that continued restrictions threaten the integrity of Northern Ireland within the UK, and the very possibility of its economy continuing to recover post-pandemic.

The Protocol is unpopular, and its popularity is sectarian, as it simply does not command cross-community consent. A new wedge issue like this is something Northern Irish politics hardly needs. Indeed, the Protocol is starting to undermine the very spirit of the Good Friday Agreement that it was meant, in a short-term way, to protect.

In London, gears are moving. Early in his term, the prime minister, Boris Johnson, created a new ministry for himself—the ministry of the Union. Similar moves are afoot in light of this week’s election. A new title has now been created for Northern Ireland minister of parliament Conor Burns: he is now the prime minister’s special representative to the United States on the Northern Ireland Protocol—and he has been dispatched to Washington on that mission. The significance of this should not be underestimated. Not only is Burns a Belfast-born Catholic, he is also one of Johnson’s closest friends and allies in the British Parliament.

Even in a time of political upheaval, the duty of the United Kingdom towards Northern Ireland remains clear. It must attempt to uphold the letter and the spirit of the Good Friday Agreement, even if European intransigence indicates that these concerns are far from front of mind in Brussels.