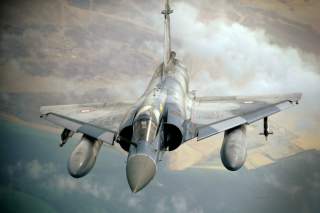 Throughout modern history, Europe has fielded some of the world’s most capable military forces. While many of those powers are nowhere near their zenith, they still field some of the most technologically advanced forces anywhere on Earth.

European nations used to dominate the planet. But after two destructive world wars, most of countries couldn’t keep up with the United States and the Soviet Union, which emerged as superpowers after the Second World War. The military capabilities of most European nations further atrophied after the end of the Cold War as the Soviet threat receded into history.

Meanwhile, in Eastern Europe, the once mighty Soviet military went into a steep decline and never really recovered since 1991.

Russia remains the single most powerful military force in Europe even though its military forces and industrial base have greatly atrophied since the collapse of the Soviet Union. Nonetheless, backed up by its extremely formidable nuclear arsenal, it retains significant forces.

The key to Russia’s military power is its nuclear arsenal, which is rivaled only by the United States. The country retains thousands of nuclear warheads—both strategic and tactical— which by default makes Russia one of the most significant powers on Earth.

Russia’s conventional forces are not what they used to be. While the Soviet Union maintained massive and well equipped conventional forces, Russia does not have the money, manpower or industrial base that its communist forbearer did.

Nonetheless, Russia is one of the only European powers that retains the ability to develop its own hardware ranging from nuclear submarines, and ballistic and cruise missiles, to tanks, fighters, jet engines, to satellites without outside assistance—even if the quality of the equipment isn’t the best.

The other main thing Russia has going for it is that its forces are very large—and relatively well trained compared to its neighbors. However, while some of Russia’s forces are modern and well trained, much of the country’s military consists of conscripts using dilapidated Soviet hardware.

It has its own indigenous ballistic missile submarines that carry French designed missiles armed with French warheads. It also maintains its own air and land-based nuclear deterrent using French designed Mirage 2000N bombers and the ASMP missile.

Upon upon a time, England maintained the world’s most formidable military force. The Royal Navy dominated the seas and the British Army occupied a vast colonial empire that held sway over a huge swath of the globe.

Britain is still a formidable force—but it’s not the globe spanning juggernaught that held a dozen civilizations under its thrall. The United Kingdom still maintains a nuclear arsenal, but the missiles are supplied by the United States. It also needs the United States to conduct nuclear testing—should anyone ever start such tests ever again.

Meanwhile, Britain’s once mighty defense industrial base is a shadow of its former self. The British aerospace industry that once produced the Spitfire and Gloster Meteor are mostly gone. Instead, the UK must partner with the U.S. and other European powers to build its hardware. Even its once world beating shipbuilding capability has atrophied to the point where the U.K. was forced to ask General Dynamics to help build the Astute-class submarine.

Today, Britain maintains a fleet of 19 surface combatants, four ballistic missile subs and six attack boats. It also has an amphibious assault ship. But until the Queen Elizabeth-class carriers are complete—it has no operational aircraft carriers. The two new carriers will carry the American developed F-35B Joint Strike Fighter—but threatens to cannibalize the rest of the fleet due to their expense.

The British army is well trained and well equipped with Challenger 2 main battle tanks and Warrior fighting vehicles. It also flies the Apache gunship. British special operations forces such as the Special Air Service are almost legendary and remain formidable.

The Royal Air Force has roughly 220 combat aircraft—about 120 Typhoon air superiority fighters and 100 Tornado bombers. It will eventually get some number of F-35B strike fighters. It also has AWACS and ground surveillance aircraft. It’s small but well trained—but not what it used to be during Britain’s heyday.

Germany has deemphasized its military after its two disastrous defeats in the 20th Century. After its decisive defeat and partition, for much of the last century, Germany existed as two states—one that was free and democratic and another that existed under a despotic communist regime.

Both states maintained formidable forces during the Cold War—in fact, the West German Bundeswehr was a very well equipped force. Germany was reunited toward the end of the Cold War—and almost immediately reduced its forces to the bare minimum.

Nonetheless, Germany retains a capable industrial base that builds what is arguably the world best tank in the Leopard 2. It is also developing the new Leopard 3. The country also builds excellent conventional submarines—which are still referred to as U-boats like their WWII counterparts. But the German aerospace industry—which used to be arguably the world’s best—was largely disassembled after the second world war.

Operational German forces are well trained and are relatively well equipped. But for obvious reasons, the Germans are very reluctant to get involved in out of area military operations—though they have participated in some operations in Afghanistan.

Germany could be the foremost power in Europe, but is held back by its history.