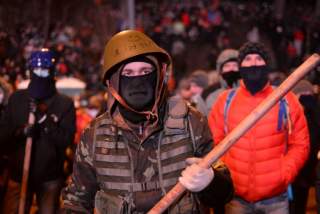 It is never a good sign when differences in interpretation as to what an agreement means arise before the ink is even dry. The cease-fire accord reached in Minsk between the Ukrainian government, the eastern separatists and Russia, under the aegis of the good offices of Chancellor Angela Merkel of Germany and President Francois Hollande of France, could stop the fighting and lay the basis for a political settlement—but it requires that all parties be prepared to implement its provisions. With two previous cease-fires failing amidst mutual recriminations about violations, the newest agreement contains similar problems that could torpedo its implementation.

First and foremost, the cease-fire calls for an exclusion zone where heavy weapons are to be withdrawn. As we’ve seen in the past, it can be quite easy to cheat—to hide weaponry and not to give up optimal firing positions. The first challenge will be what happens to the cease-fire when we see that not all heavy weapons have been removed; will one violation cause the collapse of the cease-fire, or will the emphasis be on a “ninety percent” solution—that is, if most weapons are pulled back, will that be considered sufficient?

The fate of the Ukrainian government pocket at the key railway junction of Debaltseve is also unclear. Will the town remain in Ukrainian hands, even if forces and equipment are withdrawn—as the government prefers? Or will the government surrender control, as the separatists prefer? Given that the cease-fire will not begin until Sunday, the race is on to see who can determine the status of Debaltseve.

Beyond the immediate cease-fire, there are contentious political questions. The agreement commits Ukraine to pass legislation that effectively gives the two separatist regions special status, including the ability to organize their own police forces and to be able to trade directly with Russia. Ukrainian president Petro Poroshenko will face a tremendous challenge getting the Rada to pass the necessary laws—and the risk here is that Ukrainian lawmakers, in an effort to save face, will insert provisions in the draft legislation that will be unacceptable to the separatists. Poroshenko has already stressed that the deal does not commit Ukraine to accept federalization or decentralization. But separatist leaders have argued that the agreement is the last chance for Ukraine to consider major constitutional changes.

In turn, the separatists are committed, under the terms of the agreement, to rehold elections according to Ukrainian law so that the Donetsk and Lugansk authorities can be properly constituted. What is not clear is how people displaced from the region will be able to vote. Kyiv will insist that internally displaced refugees living in other parts of Ukraine should be able to cast ballots. The separatists, in turn, are not going to want any sort of process that challenges their position. If elections are held that the Poroshenko administration declines to certify as valid, what then?

Finally, the agreement sets up a process by which the central government would regain control over the border with Russia. However, this will not occur if the special status of Donetsk and Lugansk has not been set up. Again, we have a challenge. If the Ukrainian legislation falls short of what the separatists—and Moscow—have envisioned, then the border question will be stalemated.

Left unaddressed in the Minsk talks, of course, are U.S. proposals to begin training and equipping Ukrainian government forces. The United States did not take part in the Minsk process, and while the cease-fire may be cautiously welcomed, it will not diminish the momentum, particularly on Capitol Hill, for shipping arms to Ukraine. The separatists cannot be unmindful of the Croatian precedent, where a long-term program to strengthen the Croatian military facilitated the operation that destroyed the Serbian separatist entity in eastern Croatia. Already some separatists are grumbling that Ukraine is not committed to a settlement, but will use the time to strengthen its forces and go back on the offensive later this year. Those suspicions, in turn, may cause them to be less than thorough in their own observation of the agreement's provisions. The Germans and the French hope that the accord will cause Washington to put its plans on hold.

And what does Vladimir Putin hope to gain? All the reports suggest that Putin put enormous pressure on the separatists to accept the deal. In turn, he may be expecting that once the cease-fire takes hold, the Europeans will move on sanctions relief. But if that is not forthcoming, what will be his continuing commitment to the agreement? Also left unaddressed are Russian demands for the "neutralization" of Ukraine. The deal as currently structured would not give the eastern regions veto power over Ukraine's foreign policy.

The Minsk deal appears to be the last hope for any sort of a political settlement. If this agreement breaks down—and it has many vulnerabilities—there will not be a fourth attempt. We will see if all sides have the political will to make it work.