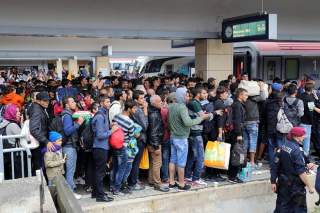 Last week’s terrorist attacks in Paris are a stark reminder that well-intentioned and humanitarian efforts can have unintended consequences. A lack of effective screening has reportedly created an opportunity for terrorists to enter Europe disguised as asylum seekers. As Europe looks to bolster measures for mandatory screening, another type of screening must not be overlooked. To date, screening migrants for infectious and contagious diseases has been voluntary, inconsistent and under-resourced. If public health security is left unaddressed, this looming issue has potential to become another disaster for European authorities, threatening not just the health of both migrant and host populations but also possibly giving rise to further societal instability.

So far this year, over 750,000 migrants are estimated to have arrived in Europe. The EU has predicted that up to three million may arrive in 2016. Ensuring that all incoming migrants are provided with health screenings is an enormous undertaking, but it is a necessary one. Currently, European public health officials only conduct voluntary health screenings of migrants, at best. This means that many epidemic-prone diseases go undetected as migrants enter into Europe. Prioritizing infectious and contagious disease detection and treatment is a short-term must.

The risk to public health and safety in Europe is enormous. To see why takes little imagination. Take Syria, for example. As the Syrian Civil War has ravaged the country since 2011, Syrians have faced crumbling infrastructure and loss of public and private services. Vaccine schedules for children (such as measles, mumps, rubella and polio) have been disrupted, as have additional treatments for tuberculosis, which can contribute to drug resistance. Migrants from other war-torn countries with failed public health systems are equally vulnerable.

When mass gatherings of people come together—in this instance, disparate groups from places like Eritrea, Syria and Afghanistan united mostly by their pursuit of a better life in Europe—the risk for disease outbreaks that can overwhelm already maxed-out health systems is heightened. Diseases that are contagious (capable of being spread person-to-person) and diseases that are infectious (arising from insects or animals that can transmit disease, untreated water-borne microorganisms or poor sanitation and hygiene) can rapidly affect large numbers of people. Anticipating these risks and preventing what is preventable, and protecting the public—including migrants—is vital to health security, and therefore to national security.

But contagious diseases are not just a one-way risk. The risk of transmission of vaccine-preventable and other infectious diseases from transit and host populations to migrants is also possible. Existing cultural beliefs, geographic inaccessibility of health services or lifestyle choices such as those of nomadic groups and “anti-vaxxers” are placing Europe, and therefore the rest of the world, at risk.

Further, stigmatization against migrants as perceived “contagion carriers” could cause more instability. The short- and long-term implications of infectious and contagious outbreaks devolving into epidemics can have much more than negative health consequences. In an environment where arson against planned asylum shelters, verbal and physical violence or threats of violence against refugees are becoming more prevalent, it wouldn’t seem to be a leap for anti-refugee supporters to capitalize upon their existing disdain, distrusting and laying blame on refugees for any large outbreaks or epidemics that could threaten host populations. Adding disease to xenophobic disdain and distrust is like adding fuel to a fire.

It isn’t hard to see how Europe’s refugee crisis could potentially mutate into a health security crisis. To prevent this, one obvious place to start is to introduce mandatory rather than voluntary health screening to identify potential disease carriers at migrant reception centers.

The current reality of offering voluntary as opposed to mandatory screening might not actually detect and treat epidemic-prone infectious diseases, and is thereby a security risk. Opting out is not an option. Ethically, there are many uncomfortable questions raised by introducing mandatory screening and, when appropriate, vaccination, not least of which is that host countries themselves don’t uniformly require this of their citizens. Moreover, despite technical guidance on quarantine and isolation measures, a standardized process for political decision makers on when and how to introduce such measures—particularly with respect to mass gatherings—is lacking.

Fundamentally, a decision to introduce mandatory screening and quarantine and isolation is a political decision that can be supported by technical guidance. Security is not just about fences and guards, but also effectively managing expectations and making difficult decisions to protect the population from foreseeable threats.

The solution requires both political and technical leadership: the EU should conduct mandatory screening and the European Center for Disease Control (ECDC) should provide more substantive guidelines as soon as is reasonably possible. And as Europe bursts at the seams with asylum seekers, refugees, and irregular migrants—presenting their own endemic disease footprint—there’s a greater need to consider when and how to establish quarantine and isolation at migrant processing/reception centers. Clear, consistent and transparent policy and processes for screening and treating migrants for infectious and contagious diseases at borders should have multiple benefits for protecting public health and agricultural biosecurity.

It’s way too soon for us to forget some of the big takeaways and lessons learned from the recent West African Ebola crisis: a scalable public health response requires a strategic concept of operations. It also requires the willingness of political leadership to make challenging decisions. And, this is precisely what Europe needs now. It’s also time to think through the security implications of how large-scale infectious outbreaks can be used as an excuse for further blame, discrimination and, ultimately, violence to ensue.

Political leadership, human capital and resources are desperately needed to ensure that infectious diseases do not further contribute to European insecurity. As explosive waves of migrants arrive in Europe from their war-torn, imploding homelands, the security in Europe becomes more tenuous. Failing to prevent preventable disease outbreaks shouldn’t be Europe’s next looming security threat.