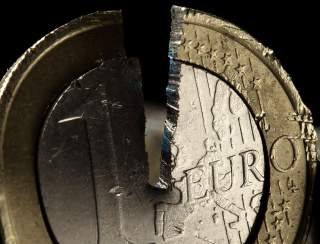 In all of the news reports and analyses of the situation in Italy and Europe Union more generally, the essence of the problem—a lack of any real financial and economic union—escapes notice or discussion. A colleague from the world of finance commented last week:

“Our founders kicked the slavery issue down the road, which led to a civil war that nearly broke up the union. The Euro founders kicked the consolidation of debt down the road, and the EU is now in a monetary civil war that probably will break up the EU and end the euro. The politicians will scapegoat the Italians and the bankers, but the fault lies with the political class.”

As this writer noted in The Institutional Risk Analyst on June 4, the U.S. has had in place a centralized clearing mechanism for financial transfers for more than a century. This first included the private clearinghouses in each city in the nineteenth century and then later the Federal Reserve System after 1913. These provided America’s economy with a seamless way of settling payments from one region to another. “In the old days, that is why $10,000 notes existed—to facilitate the clearings,” notes former Federal Reserve counsel and researcher Walker Todd.

On the other hand, in Europe, the lack of a central clearing mechanism illustrates the incompleteness of the EU. Over time the strongest member countries extended a great deal of unintended credit to the rest of the EU system, especially the weakest countries' banking systems. For instance, German and French banks finance the float of payments within the EU for the southern nations of Europe—Italy, Spain, and Greece—to the tune of about $1 trillion per day.

What this means, in political as well as financial terms, is that nations like Italy can cripple the banks of the northern European countries. Thus when Italy's bizarre, left-right coalition government, the M5S/Lega, demands debt forgiveness, German Chancellor Angela Merkel has little choice but to blink. A default and euro exit by Italy would cause severe damage to banks throughout Europe, but allowing the fourth largest economy in Europe to throw a political tantrum is equally unacceptable.

There was no provision at the creation of the EU in Maastricht two decades ago for periodic inter-country clearing because the architects of the euro avoided the politically difficult question of establishing a debt union at the outset. Instead, the nations of southern Europe went ahead and leveraged the fact of EU membership into a creating pile of national debt. By backing the trade and economic union, stronger EU nations like Germany, Britain, and France have already lent their credit support to the countries of southern Europe.

The financial union in Europe is effectively done, it just hasn’t been politically recognized as yet by Merkel and Macron. The driver of the final stage of de facto financial Anschluss was, ironically enough, the debt purchases by European Central Bank (ECB) head Mario Draghi. By purchasing massive amounts of public and private debt, the ECB, the U.S. Federal Reserve, and the Bank of Japan have all opened Pandora's Box regarding central bank forgiveness of public sector debt. Early versions of the M5S/Lega platform, for example, called for the ECB to forgive the Italian sovereign debt in its portfolio.

But there are other threats. Should Italy go forward with plans by the M5S/Lega regime to issue a new form of bearer bonds as a parallel currency, then the days of Rome remaining within the eurozone are probably numbered. To forestall such a radical move, the rest of the EU will probably be forced into some sort of fiscal accommodation for Italy. Just by coincidence, French President Emmanuel Macron has suggested the creation of a “European Monetary Fund” to allow Europe assert its “economic sovereignty.”

And by no surprise, German Chancellor Merkel backs the idea of a European Monetary Fund, provided national governments have "sufficient oversight." This means that Italy would need to agree to IMF-style conditionality concerning economic reforms and repayment in return for any new 30-year loans. If the Italians cannot come to terms with Merkel, then their alternative is radical new measures to boost spending and likely more elections.

On a bailout for Italy, Merkel said while cohesion among EU members was important, “solidarity among euro partners should never lead to a debt [sharing] union, rather it must be about helping others to help themselves,” Handelsblatt reports. “The German chancellor made the remarks when asked about a media report that Italy’s anti-establishment 5-Star Movement and far-right League had planned to ask the European Central Bank to forgive €250 billion ($296 billion) of Italian debt.”

This means Merkel must effectively allow for more subsidies and debt for Italy, debt which is already supported by the credit of all EU members, all the while protesting loudly about not accepting a debt union. Eurosceptic Alternative for Germany (AfD) has already begun to attack Merkel for “pushing liability for other countries' debts on to taxpayers in Germany.” Yet Macron's idea is precisely that; to turn the eurozone's European Stability Mechanism (ESM) rescue fund into a European Monetary Fund (EMF) with powers to give members hit by sovereign debt troubles short-term credit lines.

“Unlike most eurozone countries, Italy’s nominal (non-inflation-adjusted) growth is too weak to produce substantial deleveraging, even at today’s low interest rates. Other things being equal, a rise in nominal interest rates would thus produce rising debt ratios and further constrain the government’s fiscal space, with adverse knock-on effects for growth and employment. And, unlike most of the rest of Europe, Italy’s real per capita GDP remains well below its 2007 pre-crisis peak, indicating that the restoration of growth remains a key challenge.”

Indeed, the fact that the M5S/Lega government thought to actually put debt forgiveness and Argentina-style liquidity facilities from the ECB on the table says a lot about the real fiscal situation in Italy and throughout Southern Europe.

It has only been a year since the $6 billion state-supported bailouts of the bank Monte dei Paschi di Siena (BMPS.MI), part of a $20 billion bank rescue blessed by the EU. Now it appears that the Italian state itself may require a bailout, requiring another exception to the EU's fiscal rules. Thus, the slow-motion fusion of the EU is well underway. But selling this reality to voters outside of Italy in Germany and France may be another matter.

Richard Christopher Whalen is an investment banker and author who lives in New York City. He is Chairman of Whalen Global Advisors LLC and focuses on the financial services, mortgage finance, and technology sectors. He publishes The Institutional Risk Analyst and contributes to many other publications and appears in media outlets including CNBC, Bloomberg, and The Wall Street Journal.

Image: A damaged one Euro coin being held in a vise is pictured in this photo illustration taken in Warsaw September 11, 2012. Germany's Constitutional Court will determine the fate of theeuro zone in a keenly-awaited ruling on September 12, 2012 that is expected to give a green light to the region's permanent new bailout fund, the European Stability Mechanism (ESM). REUTERS/Kacper Pempel (POLAND - Tags: BUSINESS TPX IMAGES OF THE DAY)