Everything You Wanted to Know About Taiwan's Elections 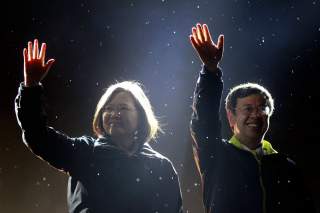 The present policy of forward-leaning support for Taiwan will continue

On the U.S. side, the major questions were whether Democrats would get a majority in the House and whether Republicans would retain the Senate or not. Both were seen as a referendum on President Trump’s conduct in office, and his domestic policies such as immigration and health care.

But for Taiwan there might be little change as a result of the U.S. elections: yes, Taiwan is losing some key supporters in the House, such as Congresswoman Ros-Lehtinen and Congressman Ed Royce, who are both retiring after having served as chair of the powerful House Foreign Affairs Committee. But there are plenty of other outspoken supporters, such as Congressman Ted Yoho (R-FL) and Brad Sherman (D-CA) who are ready and able to take their place. So, the support for Taiwan will continue, even with Democrats winning the majority in the House. Indeed, Taiwan has long been one of the rare bipartisan issues in Congress.

It is likely that the present policy of forward-leaning support for Taiwan will continue. For instance, in the bilateral sphere there are increasing contacts at many levels, prompted by the passage of the Taiwan Travel Act by Congress in February 2018.

The Administration also has started to push back much harder against China’s attempts to restrict Taiwan’s international space. Washington lodged a strong protest with El Salvador and two other nations that recently broke relations with Taiwan, it termed the attempt by China’s civil aviation organization to force international airlines to refer to Taiwan, as “Taiwan, China” as “Orwellian Nonsense,” and is pushing harder for Taiwan’s participation in international organizations such as the World Health Organization, International Civil Aviation Organization, and Interpol.

And China’s attempts to “box-Taiwan-in” with circumnavigation flights and naval operations has prompted America to push back with its own Freedom of Navigation Patrols (FONOPs) through the Taiwan Strait. Moreover, Washington has increased communication with Taiwan’s government and defense establishment on the best ways to defend Taiwan against China’s encroachment in peacetime. The United States and Taiwan are also engaged in an intensive dialogue on how to foreclose any attempt by China to launch a full-scale attack and invade Taiwan.

Taiwan’s elections: the pace of reform

Taiwan’s elections involve local elections for nine different levels of local government, the so-called “nine-in-one” elections. The highest levels are the mayors and county magistrates of cities and counties, down to the level of village wardens and indigenous district councils.

While these are local elections, they are also perceived as an indication of the support, or lack thereof, for the policies of President Tsai Ing-wen, who was elected with an overwhelming majority in January 2016, and who has governed the country since May 2016.

A major measure is the number of mayoral and county magistrate seats that Tsai’s Democratic Progressive Party (DPP) will get: in 2014, the party won thirteen out of twenty-two of these seats. One seat in the capital, Taipei, went to independent candidate Ko Wen-je, an unconventional former medical doctor who shunned traditional campaigning, while two other small counties were also won by nominally independent candidates. The remaining six counties were won by the Kuomintang (KMT), but only one of these, Sinbei City (formerly Taipei County) was significant in size.

In the 2018 elections, the DPP lost a couple of its star performers, Kaohsiung mayor Chen Chu (who is now Secretary-General in the Presidential Office), and Tainan mayor William Lai (now Prime Minister). That gave rise to a rather tumultuous fight for the nomination among DPP members in those districts. Tainan will still likely go DPP, but in Kaohsiung the race seems a toss-up between the DPP’s Chen Chi-mai and the KMT’s Han Kuo-yu. It would be a major loss for the DPP, as Kaohsiung has traditionally been very “green” territory.

In northern Taiwan, campaigning has also been heavy. For example, in Taipei City incumbent mayor Ko seems to have a significant lead. During his term in the past four years, mayor Ko has gained quite a following due to his unconventional style, but has received criticism for his rather casual dealings with China, seemingly agreeing to the “we-are-all-one-family” mantra emanating from Beijing.

Major Ko is opposed in this race by the KMT’s former legislator Ting Shou-chung (KMT), and by Pasuya Yao (DPP), also a legislator. Neither seems to have much of a chance against the incumbent.

In Sinbei City, DPP heavyweight Su Tseng-chang (a former DDP chairman and Prime Minister) is running a tight race against the KMT’s Hou You-yi. Hou had been the deputy of current mayor (and former presidential candidate) Eric Chu, who has served two terms and therefore cannot run again. The expectation is that Su will be able to win the race against Hou, who also has a negative legacy of serving as a police officer during the KMT’s martial law period.

In other countries in the North, in particular Keelung and Taoyuan, the two DPP incumbents, Lin Yu-chang and Cheng Wen-tsang, have been able to capitalize on their incumbency, and are quite far ahead of their KMT challengers.

Another key race is being fought in Taichung, in central Taiwan. There, current county magistrate Lin Chia-lung of the DPP was able to unseat a long-lasting KMT reign in 2014, when he defeated veteran KMT politician Jason Hu. In 2018, the KMT is trying to make a comeback with Lu Shiow-yen as candidate. She is running a tough race, which at this point is difficult to predict.

Moving to the east coast of Taiwan, the picture is more complicated: Yilan in the North has traditionally been a DPP stronghold, while Hualien and Taitung either governed by the KMT or independents leaning towards the KMT.

The problem is that in Yilan, DPP candidate Chen Ou-po seems to have difficulty hanging on to his traditional advantage, and KMT candidate Lin Tzu-miao is making significant inroads. A loss here would be a psychological blow for the DPP.

In Hualien, the KMT is being represented by Hsu Chen-wei, the wife of the former county magistrate who was imprisoned on corruption and insider trading charges. The DPP is running Liuh Siao-mei, a young a dynamic politician attempting to counter the establishment in the county.

In Taitung, the race is between the DPP’s Liu Chao-hao, and the KMT’s Yao Ching-ling. This also promises to be a tight race.

There are several races in other counties, such as Hsinchu, Miaoli, Changhwa, and Pingtung, but it doesn’t look like any changes will happen there that would affect the overall balance.

One other aspect is of special importance in these elections: Chinese attempts to influence the outcome. According to a statement by Prime Minister William Lai on November 1, 2018, China is engaged in a widespread campaign of disinformation, financial support of certain candidates and sponsoring of television and radio programs, as well as cyber attacks.

After presiding over a cross-ministerial meeting at the Executive Yuan, Lai said that the judiciary has launched investigations into candidates suspected of receiving large amounts of money from Chinese sources, which contravenes the nation’s election laws.

Lai stated: “We have evidence to show there have been massive injections of money from outside Taiwan to influence the election outcome, along with the dissemination of disinformation through mass media and social media.”

“Evidence also points to outside funding being given to criminal syndicates masquerading as political parties, so that they can destabilize our society by creating disturbances, and using violence and intimidation,” he said.

“Investigators have also found that some candidates are distributing cash or gifts to residents to buy their votes,” the premier said, adding that other serious cases are under investigation, but officials cannot divulge the details.

So what is the overall balance? Will the DPP be able to maintain the thirteen out of twenty-two seats, or will the KMT be able to make inroads, and increase its share of mayoral and county magistrate positions?

As it looks now, the DPP may lose one or two positions—going down to eleven or twelve seats—but as long as it captures Sinbei City, Taichung, Tainan and holds on to Kaohsiung, this will be seen as a victory for the ruling party. However, if it loses any of these four, then it will need to do some serious soul-searching.

Two aspects are important in this regard:

First, the strength of the KMT at some local levels has not led to a more invigorating KMT at the national level. The party is still led by a number of lackluster old-guard members like veteran politician Wu Den-yi, and it hasn’t been able to attract a new generation of young members who are turned off by the KMT’s worn-out pro-unificationist policies of yesteryear.

Second, the decrease in the popularity of President Tsai Ing-wen, and the resulting reduced support for the DPP, is primarily prompted by the fact that many of her mostly young supporters of the Sunflower generation feel dissatisfied with the slow rate of reforms and progress. The Sunflower protestors had high expectations, and want the President to move farther and faster on a range of issues.